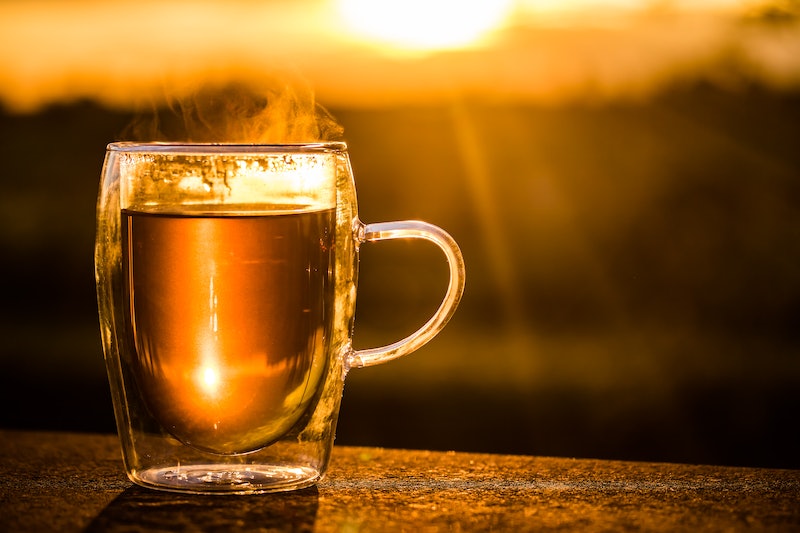 No, this is not clickbait, and yes, you read that right: Smoked water. And if your face is twisting into a knot trying to fathom what smoked water is, or maybe why smoked water is, I'm there with you. Typically, I'm relatively unfazed by the wonky food trends that make their way onto the internet. But typically even the wonkiest trend makes some sort of sense. Either it's aesthetically pleasing, texturally interesting, or thematically creative. But smoked water sounds more like a problem than a solution.

Sure, there's been a lot of water trends over time. People like to infuse their water with different ingredients to make drinking it a bit more interesting. Because even though water isn't meant to be exciting, most of us have a problem getting the right amount of hydration each day, so the desire to keep the act of drinking water from being boring is essentially a survival tactic.

From fruit to herbs to spices to tonics, there are lots of normal infusion trends with water. Either the additive makes the water taste better, or makes the water hold more nutritional properties. But smoked water? What could be the benefit of that?

Well, as it turns out, there's actually a utility for smoked water, but it's not what you think. As reported in a Bloomberg story earlier this year, back in 2013, a couple in Wales, David and Alison Lea-Wilson, known for their sea salt production — Halen Môn, which supplies some of the America's finest restaurants — was approached by renowned British chef Heston Blumenthal of Fat Duck to create the product. Chef Blumenthal had been struggling with a risotto dish that was underwhelming without liquid smoke and overwhelming with it. He wanted to find a way to create a smoked flavor that was consistent and dynamic enough to infuse various dishes with.

So, he reached out to the Lea-Wilsons, and helped to inspire Oak Smoked Water — the water that you don't chug after a hot yoga class. This water should really be thought of as an artisanal ingredient-booster meant only for the kitchen, and not at all for hydration.

The process in which smoked water is made is actually quite similar to barrel-aging whiskey, which is maybe not all that surprising. For 10 days, filtered tap water is circulated through loops of piping that have oak chips and oak dust, creating a whiskey-looking non-alcoholic liquid that smells purely of burning wood. (Not house fire burning wood, more like campfire and barbecue burning wood, to be clear.)

On the Halen Môn site, a 3.5-ounce bottle costs about $5.50, and a liter will cost you about $18, making perhaps the most expensive water on the market. But maybe that's because for right now, it's the only smoked water on the market in the states. And while it's nothing new in Europe, it's only just starting to make its way to the states. After making an appearance at the Fancy Food Show in New York this summer, and after secretly existing in menu items at fine dining restaurants in the city for some time, it's about to become more readily available to adventurous eaters and kitchen creatives on the U.S. market.

Just think of all the possibilities if you had a bottle of Oak Smoked Water in your home: smoked Bloody Marys, smoked bacon, smoked eggs, smoked chocolate — the combinations are endless, and particularly appealing for people who have small kitchens and no access to a grill. Smoked water will actually create opportunities for flavor profiles that would never have been possible otherwise.

For now you can buy it online, save up and try it out at Eleven Madison Park, or wait for it to hit U.S. retailers. And don't worry, you likely won't be stuck sitting next to someone on the subway who is chugging smoked water, breathing through the sleeve of your shirt to filter out the intense barbecue aroma. This trend is actually a lot less weird than it sounds, an internet first!