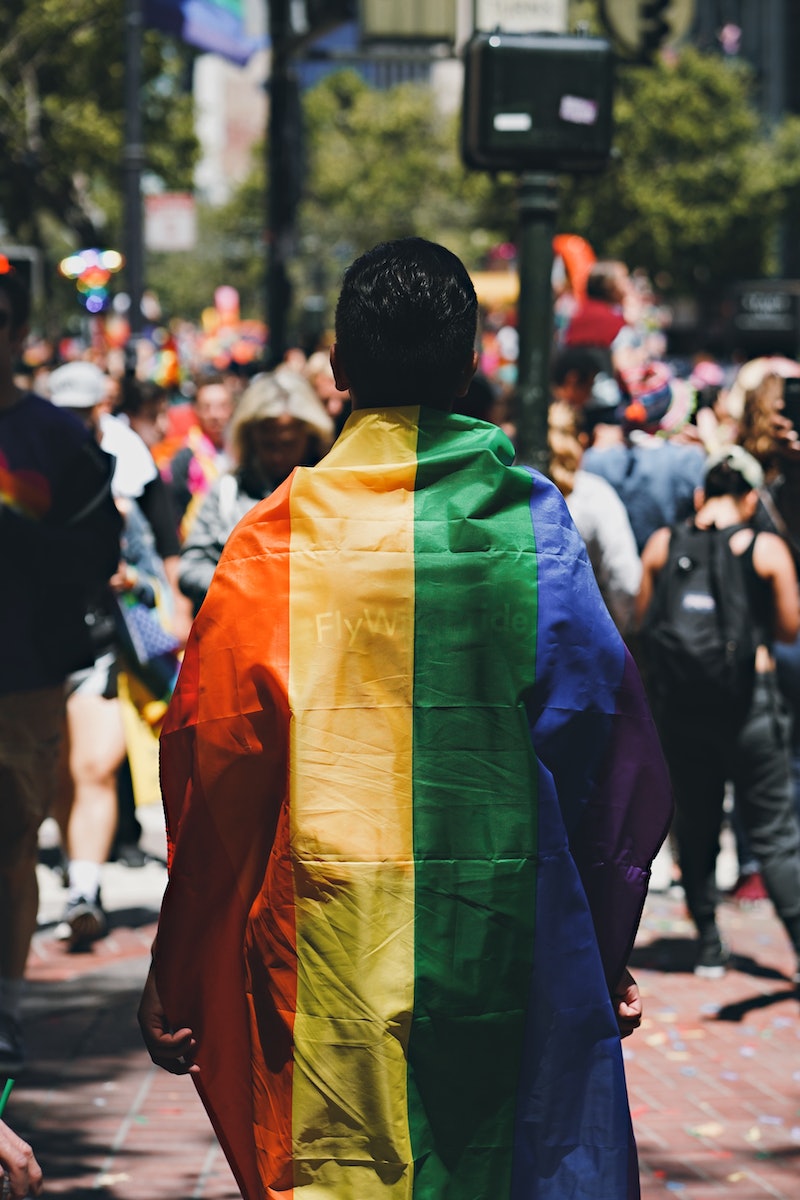 Eight years ago, while scrolling through Tumblr, Brittany McMillan came across a troubling statistic: LGBTQ youth are almost five times more likely to attempt suicide than heterosexual youth. McMillan was upset by the suicides themselves, but she was just as upset by the fact that she hadn’t heard about them on the news. “As someone who [has] struggled with anxiety, depression and thoughts of suicide, I understood how much pain these teens had to be in to decide to end their lives,” McMillan tells Bustle via email. But rather than dwell on her sadness, McMillan decided to take action.

Inspired by Canada’s anti-bullying event Pink Shirt Day, McMillan encouraged her friends to raise awareness for the high rates of LGBTQ suicide by wearing purple. It wasn’t hard to get people interested in her cause. All she needed was a blog post, a few poster boards, and a willingness to ask people she knew to support and promote her campaign. And with that, Spirit Day was born.

Now every year on the third Thursday in October, people around the globe wear purple to show their support and encourage discussion about mental health and suicide among LGBTQ youth.

With the event's success though, came quite a bit of negative backlash from internet trolls. “When you’re young and you try to do something good, it’s hard to be confronted by people’s senseless hate,” McMillan said. “Reading homophobic comments was discouraging... It took me some time to learn that the positive support was more important.”

Despite some of the negativity she faced, the majority of the feedback McMillan received was positive. Soon the event had spread far enough that the LGBTQ advocacy group GLAAD reached out to see if it could get involved. GLAAD played a big role in spreading her message.

“They do an incredible job reaching out to a lot of important people in the media – from celebrities to politicians to news anchors” to participate in Spirit Day, McMillan said. “They’ve reached people I never would have dreamed of and gotten them involved in a big way.”

With the organization’s help, the Spirit Day has garnered support from celebrities like Ellen Degeneres and Caitlyn Jenner. Last year, Laverne Cox even lit up the Empire State building in purple to show her support.

McMillan hopes that Spirit Day will provide comfort for LGBTQ youth that are struggling. “I want LGBTQ+ youth who are feeling alone or feeling like there’s no way out to know that they’re not alone. They are cared for and there are resources out there that are available to them,” she explained.

Spirit Day is an awesome way to show your support for LGBTQ folks, but it’s also important to remember to take that message with you throughout the rest of the year. If you see someone being mistreated or hear someone using derogatory language, you have a responsibility to speak up, McMillan said.

Using your voice not only to teach others but to remind your loved ones that you care is important too. “Sometimes it’s hard to know that someone is having a rough time which is why it’s so important that we make an effort to let our peers know every day how loved they are,” she said. “It’s as easy as giving a smile or asking someone about their day.”

In the years since founding Spirit Day, McMillan has taken that mentality with her although a lot has changed in her life. Now 23, McMillan has kept busy with work and school, but she still takes time to educate people about LGBTQ issues when she can.

To her, Spirit Day is a promise. “We wear purple to remember the lives of those we’ve lost in the past,” McMillan said. “We celebrate, support, and stand up for the people of the present; and we promise to do the same in the future.”

Join McMillan in making the promise to support LGBTQ youth by signing the pledge to go purple this Spirit Day.