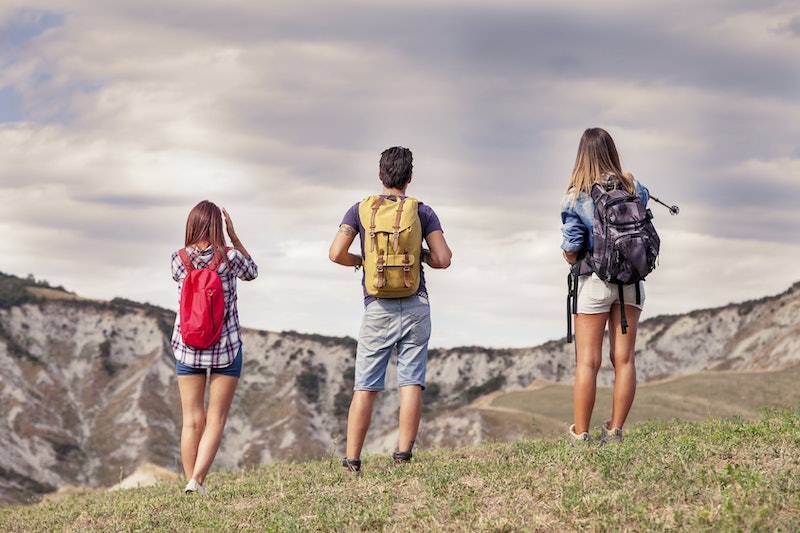 How would you like to get paid to get schweaty? Now you can. Someone finally figured out the motivation we all need to get our behinds moving: Pizza. No... wine. No... money. It's money. If you want to stay active and earn some cashola in the process, you can get paid in cryptocurrency for walking with Sweatcoin, the new app everyone is obsessed with — immediately behind Google Arts & Culture, the fastest growing app right now. Sweatcoin has more than two million active users each week, it's acquired more than five million users in the past year, and its revenue jumped by 266 percent in just the last quarter. So, once again, everyone is obsessed. Here's how the app works.

Download the app, sign up, and connect it with your GPS location, and health and fitness data. Sweatcoin will track the number of steps you take in a day. Note: the app says only steps taken outside will be counted, although some users have noticed that it still counts steps they take inside their home. For every 1,000 steps Sweatcoin logs, they'll pay you 0.95 in sweatcoins. You can later redeem these coins for fitness gear, classes, gift cards (like for PayPal or Delta), an iPhone X, and more.

TechCrunch spoke with co-founder Anton Derlyatka, who said in the future, he'd like for users to even be able to use sweatcoin to pay taxes!

There are a couple of caveats. For starters, with the free version of the app, you can only earn a maximum of five coins a day. Still, it's better than nada. If you want more coin, you'll have to fork some over and upgrade to one of the paid versions of Sweatcoin. It's pretty simple, though: after a free 30-day trial with one of the paid versions, you can pay for the upgrade with steps you take; so you're never really "paying" for anything. The next version up is Shaker, which costs 4.75 sweat coins a month and has a cap of 10 coins a day. Quaker costs 20 coins a month with a cap of 15 a day. Lastly, Breaker costs 30 a month, with a cap of 20 coins a day.

One other minor drawback is you need to have the app running and using your GPS in order for it to track your steps, which could suck the life out of your battery. The app offers a battery saver mode, but you could lose steps if you use it.

Some users note the app isn't totally accurate, but in all honestly, what app that tracks your steps is? Others report Sweatcoin seems to be pretty spot on. Either way, if you're up and walking enough, you could feasibly nab some prizes within a few short days.

Of course, this kind of app isn't for everyone, but the concept is unique and just goes to show all of the unexpected ways we might be progressing with both "exercise apps" and what we can do with cryptocurrency. It's also shedding light on a concept that not a lot of people are aware of — while plenty are aware of the cryptocurrency Bitcoin or even its cousins Ethereum and Litecoin, a much smaller number are aware of just how extensive the cryptocurrency market is, with hundreds of different types to choose from (here's looking at you, Dogecoin).

While Sweatcoin may have seemed to explode overnight, it doesn't appear to be going anywhere anytime soon. The startup has raised around $5.7 million in seed from investors, and they're making plans to expand outside the U.S. and UK into Europe and Asia, as part of their next steps. If you're interested in trying it out, it's available for download on both iOS and Google Play.