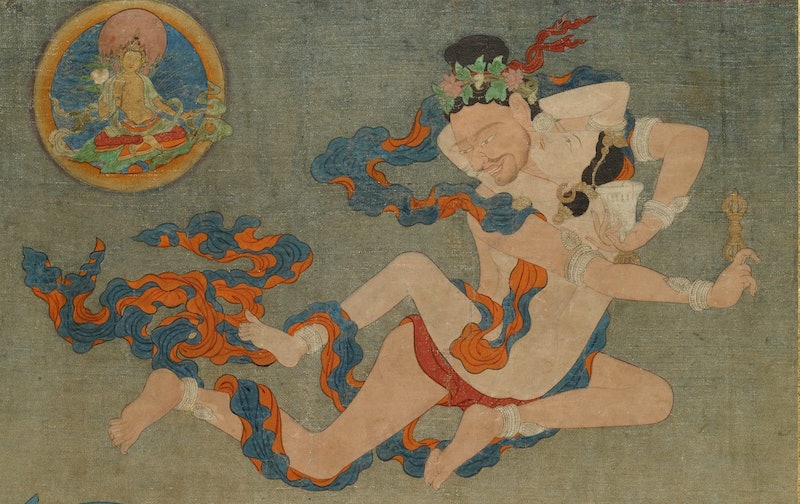 If you're interested in sexual practices, the concept of tantric sex has probably crossed your horizon more than once. A supposed ancient Indian practice, it emphasizes incredibly slow, intimate connections with deep breathing and certain rituals, and is generally conceived of as a holy, spiritual sort of tradition designed to help people attain enlightenment with a heavy dose of pleasure along the way. However, that may not exactly be what its original practitioners had in mind. As we'll discover, tantric sex is a perfectly good way to spend your time, but it's had a slightly odd history fraught with colonial Western attitudes and debauched monks, and what we see these days is very much a New Age creation, not an ancient tradition.

This doesn't necessarily matter. Tantric methodologies for getting it on are pretty awesome: you're supposed to focus on intimate non-penetrative touching and breathing while aroused, preferably for a long time, and with certain actions involved. The resulting orgasms, if you do get around to penetrative sex, are likely to be very good, and there's nothing wrong with awesome orgasms or being close to your partner. But there's more to tantric sex than just incense and an attempt at enlightenment.

Here's the low-down on the stranger bits of tantric sex's history and how what we know these days isn't exactly perfect cultural practice.

More like this
How Do I Deal With Both ED & Premature Ejaculation?
By Sophia Benoit
Hinge's New NFAQ Feature Is Demystifying Queer Dating
By Emma Carey
The Best Time To Date After A Breakup, According To Experts
By Bustle Editors
Are Quality Time & Physical Touch Love Languages Compatible?
By Lexi Inks
Get Even More From Bustle — Sign Up For The Newsletter