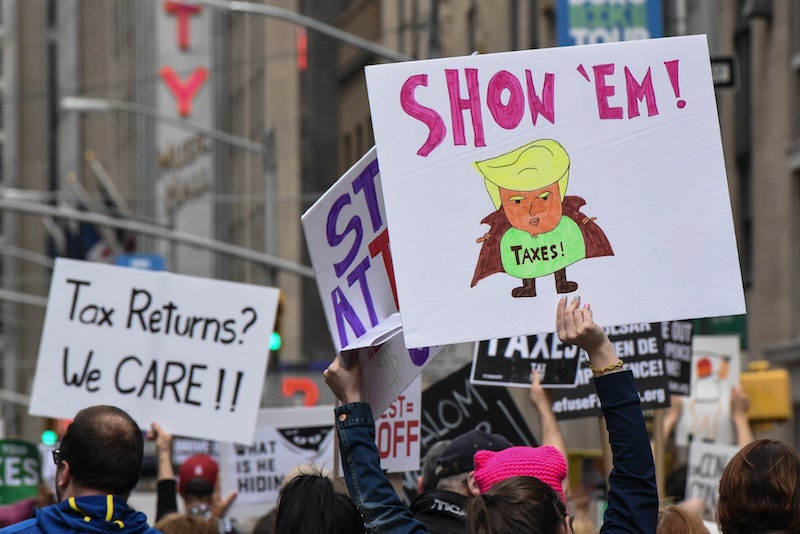 At the 2017 Tax March, protesters took to the streets on tax day to demand that President Trump release his tax returns. April 15 is rolling around again, but the organizers of the 2018 Tax March are highlighting a different issue this year: The Republican tax bill that Trump signed into law in December.

"Led by everyday Americans who are tired of systems that are rigged in favor of the super-rich, the Tax March movement maintains that any reform to the tax code should be about closing loopholes for the wealthy and big corporations and building an economy that invests in working families," the organization says on its website. "The Republican tax scam does just the opposite."

According to the Joint Committee on Taxation, the tax bill that Trump signed will cost the U.S. $1.46 trillion in tax revenues over the next 10 years. The majority of Americans — 53 percent — will pay more in taxes under the bill, including all average households that make less than $75,000 a year, according to the Tax Policy Center. An analysis by the Center on Budget and Policy Priorities concluded that 70 percent of the benefits the bill provides will go to the top 20 percent of earners, with the top 1 percent receiving about 34 percent of those benefits.

"In order to give tax breaks to millionaires, billionaires, and wealthy corporations, the TrumpTax raises taxes for 92 million middle-class families, rips health care away from 13 million people, and threatens life-saving programs millions of Americans rely on," the 2018 Tax March organizers write.

On the face of it, the 2018 tax march has a completely different focus from the one the year before. The first event centered on a politician's conduct in office, while the other is aimed at drawing attention to a specific piece of U.S. law. And yet Trump's refusal to release his tax returns — he still hasn't — is in fact very related to the bill that he signed into law.

In the lead up to the bill's passage, Trump promised that he himself wouldn't personally benefit from the bill's provisions if it became law. “It is going to cost me a fortune, this thing,” he said at one event in Missouri. “Believe me, believe me, this is not good for me.”

However, multiple independent analyses have found that this almost certainly isn't true. TIME magazine identified three distinct ways the bill is likely to benefit the Trump family: Its "pass-through" business tax cut, in which business-owners will pay lower individual income taxes than they have in previous years before; its repeal of the alternative minimum tax, a provision intended to prevent wealthy Americans from skimping out on their tax share; and its easing of the estate tax, which deals with how inheritances are taxed when a wealthy person dies.

More broadly, the bill also lowers the corporate tax from 35 percent to 21 percent and the top individual tax rate from 39.6 percent to 37 percent. Both of those provisions are likely to personally benefit Trump as well.

And yet it's impossible to say any of this with certainty. Why? Because Trump hasn't released his tax returns — thus bringing the 2018 Tax March full circle back to the one that took place a year earlier.

Nevertheless, the near-unanimous consensus among analysts is that Trump will not be hurt by the new tax bill, and will indeed benefit greatly from it. In addition to TIME, CNN, the Washington Post and PolitiFact all came to this conclusion as well.

"More than 125,000 people came out on Tax March 2017 to demand Donald Trump’s tax returns and a fairer tax system for all," the organizers of the march write. "On the anniversary of this historic march, people from across the country will come together once again to express their outrage at Donald Trump and Republicans in Congress for passing one of the least popular tax bills in recent history."

If you'd like to attend one of the Tax Marches on April 15, just click here and punch in your zip code.