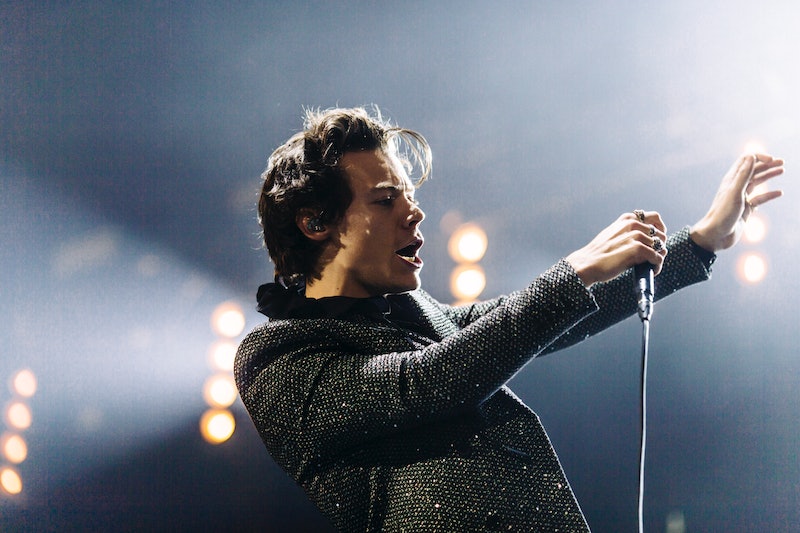 The celeb event may still be months away, but the most important details about it were just revealed. What the 2019 Met Gala theme is has been announced — and it'll definitely grab your attention. The theme, "Camp: Notes on Fashion," is inspired by writer Susan Sontag's famous 1964 essay, "Notes on 'Camp.'" And no, she wasn't talking about camping in the outdoors. Instead, her piece defined camp as “love of the unnatural: of artifice and exaggeration." But it gets better. Harry Styles will also be co-chairing the show for the first time ever.

Along with Styles, the other co-chairs will be Lady Gaga, Serena Williams, Gucci Creative Director Alessandro Michele, and, of course, Vogue Editor-in-Chief Anna Wintour.

Andrew Bolton, a curator for the Costume Institute (which holds a costume exhibition in coordination with the Met Gala each year), described the notion of "camp" to Vogue as "style without content." He added, "[Camp] has become increasingly more mainstream in its pluralities—political camp, queer camp, Pop camp, the conflation of high and low, the idea that there is no such thing as originality.”

For those who are still a little confused about what the theme might look like in real life, Bolton further explained to Vogue that the word "camp" derives from the French verb "se camper," which means "to strike an exaggerated pose."

None of the three celebrity co-chairs (Williams, Styles, or Gaga) have yet to make a public statement about the honor.

For Gaga, Styles and Williams, this will be the first time to take on such iconic roles. Gaga's position as co-chair might seem the most obvious: she is, after all, known to strike an exaggerated pose. Williams' entry into the event might be surprising to some, since she's a professional athlete rather than an entertainer, but it's a welcome change. Williams has long been an activist for women's rights on and off the court (not to mention a total style icon on the court).

As for Styles, the singer is known to be somewhat of a style maven. On the same day that the Met Gala theme was announced (Oct. 9), Vogue posted an article on Styles' outfit, as snapped by paparazzi while he was at Narita Airport in Tokyo. Styles was "dressed in tailored layers in a subdued black and white palette, taking cues from a bygone era when dressing up for the airport was de rigueur," per Edward Barsamian of Vogue.

The unfortunate aspect of getting to know the theme of the Met Gala so early is that you have to wait so long to actually see the theme go down on the red carpet. The 2019 Met Gala will take place on May 6, 2019. That will also be the date that the exhibition will be released by the Costume Institute.

To The New York Times, Bolton further explained the goal of "camp" as a theme, and even claimed that "Trump is a very camp figure."

He said, “We are going through an extreme camp moment, and it felt very relevant to the cultural conversation to look at what is often dismissed as empty frivolity but can be actually a very sophisticated and powerful political tool, especially for marginalized cultures."