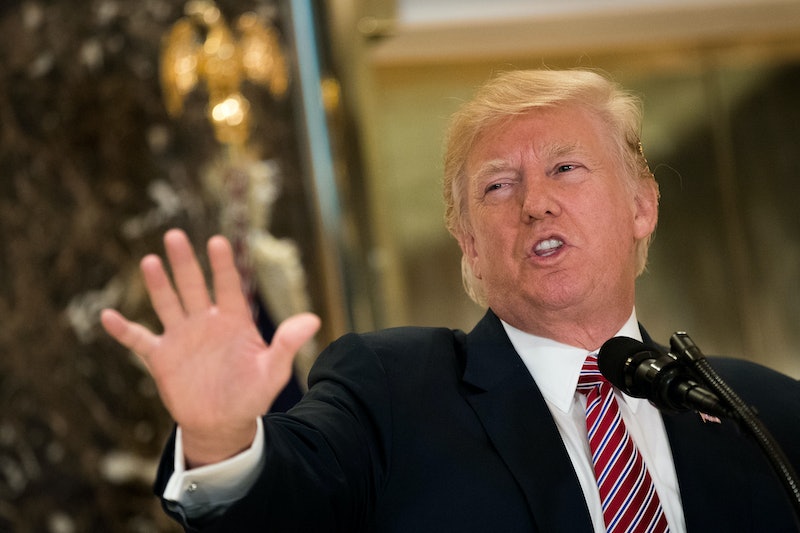 On Tuesday, in the midst of a wildly inflammatory press conference regarding the white supremacist attack in Charlottesville on Saturday, President Donald Trump blamed the "alt-left" for the violence. If that's not a term you've heard before, you may be wondering, what exactly is the "alt-left?"

The answer, in simple terms, is that's it's not really a thing. Not like the alt-right, at the very least. The term "alt-right" spawned essentially as a conscious rebranding effort by white supremacists and neo-Nazis, and subsequently gained steam thanks to mainstream outlets reporting them as "new" and "different" kinds of conservatives.

The term "alt-left," however, did not originate as some sort of similar, self-claimed title by the far-left. Rather, its earliest usages on social media (which ultimately led to a write-up in Vanity Fair, among other places) came from centrists and establishment Democrats drawing an equivalence between the "alt-right" and the progressive left that was skeptical of former Democratic nominee Hillary Clinton.

In short, "alt-left" originated as centrist criticism, a retaliatory label conceived by moderate Democrats and Clinton supporters to attack those to their left, such as the Bernie Sanders wing of the party ― those more inclined toward socialism and radical change than the more guarded, incrementalist approach that largely defined the Democratic Party throughout the Obama era.

The term has caused a lot of consternation and protest among the left, and whatever you think of the nature of its opposition to the Clinton campaign through the 2016 Democratic primaries ― often more vulgar, combative, offensive, and unapologetic than traditional Democrats are comfortable with or willing to accept ― it's not hard to see why.

The implication of calling someone "alt-left" is that they're in some sense comparable to the thinly veiled white supremacist extremism of the so-called alt-right. And considering how many leftist organizations were on the front lines of the Charlottesville conflict ― the rapidly expanding Democratic Socialists of America, for example ― there's a very solid argument that it's an unfair and wildly misguided line of thinking.

It's also now enabled Trump to effectively seize and appropriate a new term of attack, in much the same fashion he grabbed onto the term "fake news" after the media began using it to describe hoax news websites and wild-eyed conspiracy theories late last year.

This is why "alt-left" is currently making its way through the mainstream media: Trump is pulling a "both sides do it" equivalence between racist and anti-racist demonstrators in the aftermath of a clash in which an anti-racist demonstrator was slain. He's not the first to do this; Fox News host Sean Hannity has done the same in recent months. But it's undeniable that Trump's towering platform has now injected the phrase into the mainstream in a new way.