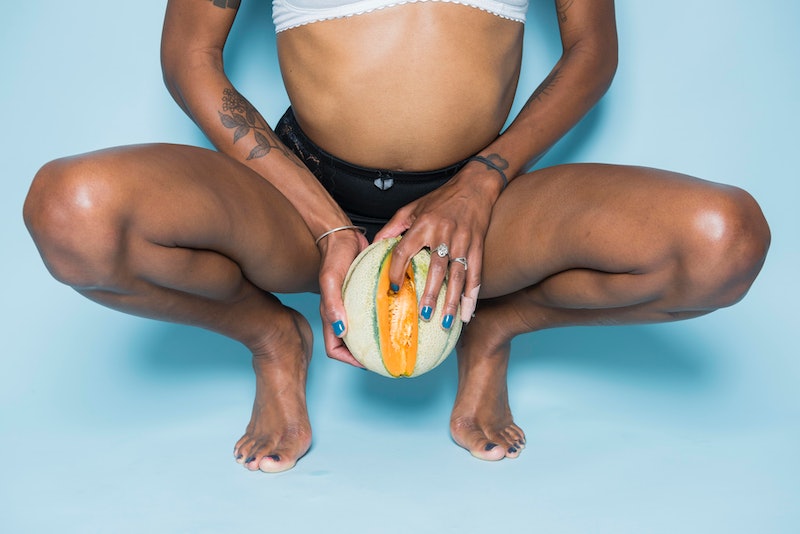 Nonscientific observation: when we talk about "the female orgasm" like it's some mysterious, opaque, barely achievable concept, what we really do is encourage people to be lazy about it because it's basically impossible to figure out anyway. A recent study out of Indiana University is trying to tackle this problem with a shocking solution: talking about vulva stimulation techniques using specific language. Results were published in the Journal of Sex & Marital Therapy last month and they represented a diverse array of precisely how women like to be stimulated to achieve orgasm.

Indiana University partnered with the OMGYes project, taking a look at their research involving over 1,000 women to gather data on different stimulation techniques that worked for them. OMGYes went to the trouble of naming and describing all of them in detail so that we can have some language for trying to define "um, that thing you do with your hand where it's like, right there, while your other hand is like, doing that other thing? You know?"

The study surveyed 1,055 cisgender women ages 18-94 (side note: someone please tell me where to sign up for orgasm studies when I'm 94; I feel like I will have some data to share).

Full disclosure: study participants were overwhelmingly heterosexual. Ninety-one percent identified as straight, while 4.8 percent identified as bisexual, 1.6 percent identified as gay or lesbian, 0.7 percent identified as "other," and 0.6 percent identified as asexual. Researchers asked them to check off stimulation techniques they liked best off an impressive list of options, organized by location of touch, amount of pressure, shape/style of the motion, and pattern. Unsurprisingly (although for some reason it still feels important to scream it from the rooftops), only one in ten women reported enjoying firm pressure. Most women preferred a light-to-medium touch. Up-and-down, side-to-side, and circular motions on or in the vicinity of the clitoris were the most popular "shape/style" methods, although other styles like tapping and even "pushed together like a sandwich" were checked off by at least some women.

Almost three-quarters of women reported better orgasms when they had clitoral stimulation added to their penetrative sex.

Of the 15 patterns presented to study participants, 13 of them were checked off as favorable by most women. (So like: just touch women in all the ways! Mystery solved!) All the classics performed well in the pattern section of the survey, including rhythmic patterns, circles, switching between patterns, and switching between pressures. Women also tended to enjoy nonlinear paths to orgasm (ie., ebb and flow to build-up, rather that a straight shot to orgasm). Less than a fifth of the women surveyed said they needed "sex that lasts a long time" to achieve better orgasms. (Vulvas get tired, y'all.)

Also not a surprise: almost three-quarters of women reported better orgasms when they had clitoral stimulation added to their penetrative sex. Only 18.4 percent could orgasm without it. And 21 percent said they couldn't even answer the question because their partners had never tried giving them clitoral stimulation during penetrative sex. (Which like, girl! Lean in! Get in there and do it yourself!)

Basically, the classics are classics for a reason: don't ignore clitoral stimulation, do a bunch of different stuff, and don't stop or change a good thing when it's working. This study isn't unearthing super groundbreaking new techniques that you've never heard of. What it's doing is proving that there's a bunch of stuff that works for a lot of different women. You just have to have the patience and interest to start trying.