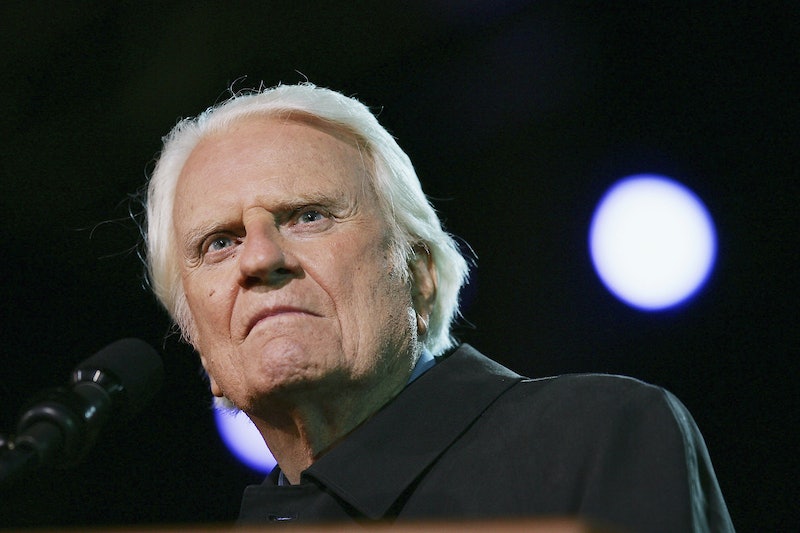 After Karen Pence's profile was published in the Washington Post, a peculiar nugget from Mike Pence's life about him not eating or drinking with other women resulted in the internet exploding into a debate over whether Pence's practice was rooted in loyalty to his marriage or just plain ol' misogyny. Ever since, there has been a considerable amount of curiosity about Pence's practice and the Billy Graham Rule.

The idea of not eating or drinking with a woman other than your wife entered political consciousness when the evangelical pastor Billy Graham factored it into the "Modesto Manifesto." In 1948, Graham carried out a bunch of evangelistic meetings in Modesto, California, flanked by his ministry team to discuss ministry life and the various problems it faced.

A chief concern in these meetings revolved around biblical integrity and morality. Pastors and ministries were concerned with public image, specifically the image of religious figures and their commitment to the institution and sanctity of marriage. In his autobiography, Just As I Am, Graham discussed what went behind the manifesto, which included a provision about not eating, traveling, or meeting with a woman other than his wife, Ruth, unless it was in the company of other people.

"We pledged among ourselves," Graham wrote, "to avoid any situation that would have even the appearance of compromise or suspicion. From that day on, I did not travel, meet or eat alone with a woman other than my wife." Graham's wife had no issue with the provision, either. According to the Christian History Institute, Ruth was happy with the rule because she “would rather have a little of Bill than a lot of any other man.”

The practice is being discussed once again, but this time it is with much more fervor, considering Pence is not a pastor but the vice president of the United States of America. His status as the second most influential man in the American political climate has led many to critically look at his adherence to the Billy Graham Rule. While some insist that it is to protect his marriage with Karen, others highlight that the provision he submits to is fraught with issues.

Pence practicing his own version of the Billy Graham Rule is disturbing because it demonstrates allegiance to several incredibly outdated and dangerous ideas about women and self-control.

At its core, the provision implies that men are beastly creatures bereft of any command over their sexual urges. Such a practice insinuates that a man on his own is a man unchained, and that without his wife's presence, he is spiritually predisposed to violating the vows he made to her. Because the rule removes responsibility from men in terms of thinking for themselves, it goes on to view women who are not the wives of these men as sources of temptation, not human beings. By adhering to such a concept, the person practicing it is basically viewing other women as potential betrayals to marriage.

Beyond the bizarre gender-based myths, Pence's practice raises another and even more concerning issue: How does he function as the vice president of America? One of the fundamental responsibilities of his job includes close and constant contact with colleagues, regardless of their gender. What if he has to share notes over a consequential matter of policy with a female colleague who suggests brainstorming over lunch? Does Karen or a man accompany Pence in such a scenario? Does he simply refuse said female peer? These are questions worth looking into.

If the same case was flipped and a female politician stated that she refuses to socialize with any man who is not her husband, she would not be able to climb her professional ladder with ease. At all. In fact, chances are people would term her sheltered, inefficient, and unfit for her profession. In spite of his arcane practice, Pence is afforded incredible amounts of political dominance for one simple reason. He is a man.