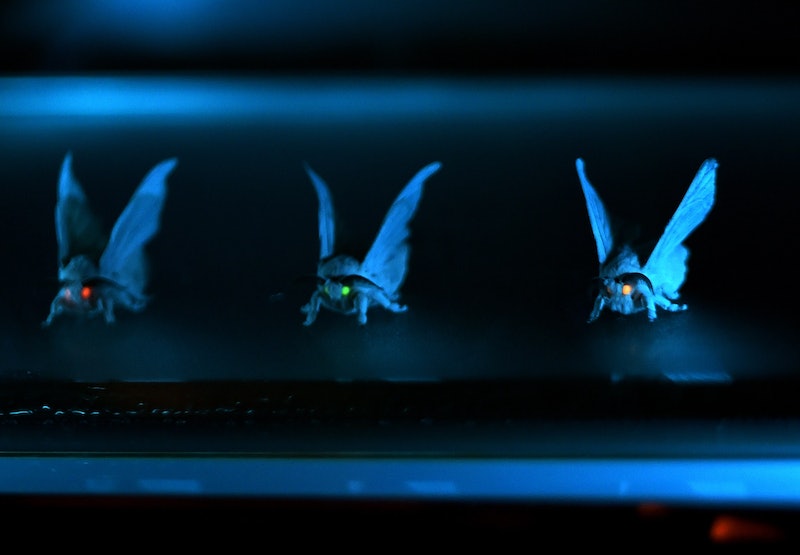 If you’re in the Halloween mood and looking for a good scare, check out the Creatonotos Gangis (C. Gangis) moth — the giant insect that has gone viral for its spooky appearance. A picture and video of the scary AF moth was originally shared in a Facebook post on Oct. 19, and has garnered over 41 million views since. Unlike other species in the moth family that could be considered more beautiful than butterflies, the C. Gangis moth has four hairy butt appendages that are scaring people across social media. One Twitter user, who was clearly freaked by the picture of the moth, said, “That’s the devil in disguise. That sh*t has the goat’s horns and everything.” Another person simply responded by saying, “Kill it now!!!!!!!!!” One thing’s for sure: this demon moth is sure to give you actual nightmares. Let’s just thank our lucky stars the mothman in The Mothman Prophecies didn’t look like the C. Gangis moth.

Though the moth’s butt appendages are freaky AF, they do serve a special purpose. The C. Gangis moth, which is native to Australia and South East Asia, use these appendages for mating. Basically, the “butt appendages” are actually large glands that inflate with mate-attracting pheromones, and then they excrete them slowly so lady moths can waft in the hormones. TBH, I don’t know if knowing the science behind the viral moth makes them less or even more disturbing.

Despite the off-putting — and for some, straight-up terrifying — appearance of the C. Gangis moth, the strange insect actually completely harmless. While entomophobia (aka, fear of bugs) is a completely valid phobia, most of us are creeped out by insects simply because our brains often confuse disgust with fear. It may not seem like a big deal to cast off insects as gross and unimportant, but they actually play a crucial role in our society and environment. Insects are essential to a healthy ecosystem; they provide pollination, and help to ensure we are not (literally) drowning in garbage by eating organic waste such dead leaves and animal feces.

Not to mention, many commonly used materials and products are made with insects or their byproducts. This includes everything from silk, lipstick, and wax products, to an insect-based flu vaccine that was approved by the FDA in 2013. Even if you are creeped out by insects, you’ve inarguably benefitted from them being around, and would definitely experience a negative impact if they were no longer around — which some scientists are saying is a distinct possibility even scarier than the c. gangis moth.

A study published in the scientific journal PLOS One revealed that flying insect populations have declined by 75 percent over the course of the last 27 years. According to the study, "Loss of insect diversity and abundance is expected to provoke cascading effects on food webs and to jeopardize ecosystem services." In recent years, the decrease of honeybee populations and colony collapse disorder have become mainstream topics, but this new study shows the problem is much larger than one species. If insects were to go completely extinct, there would be dire, and possibly fatal consequences for humans. While you could argue the extinction of insects would stop the spreading of diseases like malaria and Dengue fever, much of the human population, animals, and plants would starve to death before they saw any potential benefits. Since insects also play a large part in quickening decomposition, we’d literally be surrounded by piles of dead carcasses and trees if they were to no longer exist. And that’s more disgusting than the appearance of any insect.

So next time you a picture of the C. Gangis moth and its disturbing butt appendages, try to remember they serve an important purpose in nature. This obviously doesn’t mean you have to love insects or let them into your home, but maybe turn some of that disgust into admiration from a far, far distance. Insects may be strange and creepy, but you’d miss them if they no longer existed.