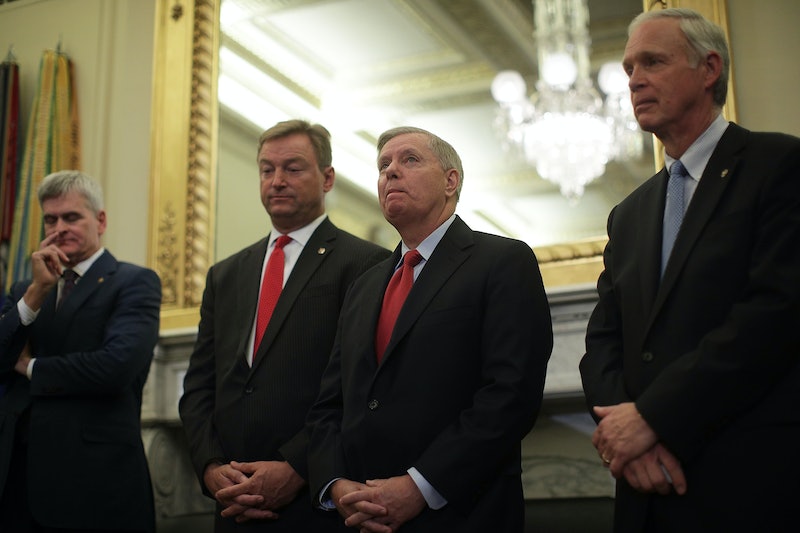 You may have thought that Republican attempts to repeal Obamacare died in August, when Sen. John McCain surprised everyone by voting no on the so-called "skinny repeal" bill. But after seven years of Republicans promising to relieve America of what they viewed as the sick system of Obamacare, there is still one more attempt at a miracle cure for the comatose repeal process. The Cassidy-Graham health care bill could be Republicans' last hope.

Sens. Bill Cassidy (R-LA) and Lindsey Graham (R-SC) unveiled their bill on Wednesday, but it was sort of overshadowed by Bernie Sanders (I-VT) unveiling his ambitious single payer health care proposal the same day alongside several top Democrats. But unlike Sanders' plan, which isn't likely to pass any time soon — and, many say, exists more as a declaration of principles than actual proposal for legislation — Cassidy-Graham has a shot at becoming law, and soon.

The basic idea behind Cassidy-Graham, according to its drafters, is to let states take over their own health care, rather than having the federal government run health care policy for the whole country. It would dismantle most of the Affordable Care Act's structure, getting rid of subsidies for buying insurance on the individual market and the Medicaid expansion, and turning that money into block grants of funding that states receive in order to spend on health care. States, however, would get to decide how to spend it themselves.

But Cassidy-Graham isn't just about changing the rules and giving states more choices. The block grants to states would represent, overall, significantly less money for health care spending than under the Affordable Care Act. While the rules would require that it to go toward health care, it doesn't necessarily have to be spent on ensuring low-income people can afford insurance, which was the primary goal of Obamacare. And the block grants won't be divided among states in accordance with the amount they currently get from the federal government under the Affordable Care Act. The bill aims to equalize spending between states that expanded Medicaid under the ACA (which was the state's choice) and those that didn't.

Defenders of Obamacare have kicked into high gear to have this bill euthanized just as successfully as they pulled the plug on previous repeal efforts. They've latched on to the changes in funding by states, and an analysis by the Center for Budget and Policy Priorities of how different states would lose or gain funding under the bill.

While some states, like Texas, could gain funding, others, like California and New York are expected to lose 27.8 billion and 18.9 billion per year by 2026, respectively.

In addition to the funding changes, the Cassidy-Graham bill would also weaken federal regulations on selling health insurance, making it possible for states to waive the rules blocking people with pre-existing health conditions from getting charged more.

Cassidy and Graham are working against the clock to get this bill passed — according to the Senate parliamentarian, the reconciliation budget measure, which allows Republicans to pass the bill with a simple majority of 50 votes instead of the usually necessary 60, will expire at the end of the fiscal year on September 30. They don't have the necessary 50 votes yet, and it's unclear if they will in time.

Senate Majority Leader Mitch McConnell has seemingly signed a DNR on Obamacare repeal after its failure in August, and isn't interested in whipping votes to get it passed. He's reportedly not getting involved unless he feels confident it will actually happen. "McConnell has zero interest in presiding over another goat rodeo,” a health care lobbyist told Vox.

To get this bill over the finish line, Cassidy and Graham would have to succeed where previous attempts had failed and get 50 Republican to swallow the pill. And considering that Republicans Sens. Lisa Murkowski and Susan Collins seemingly decided to wash their hands of this whole business in August (and will probably have serious issues with this bill's defunding of Planned Parenthood), the margin of error would literally be just one senator saying no.

That one senator may have already been found. Rand Paul tweeted that he wouldn't support the bill, leading to a bizarre exchange with Cassidy himself on Twitter. After Paul tweeted that he "can't support a bill that keeps 90% of Obamacare in place," Cassidy responded that it "repeals entire architecture of Obamacare & gives Kentucky control over its own health care."

He added, "Willing to go over it with you." Paul turned down the offer.

For the most part, health care reporters and activists aren't treating Cassidy-Graham as likely to pass in the next two weeks. But it remains a possibility, and in this crazy year of seemingly never-ending attempts to roll back Obamacare, we probably shouldn't discount the possibility that this is the attempt that finally, at the last possible minute, succeeds.