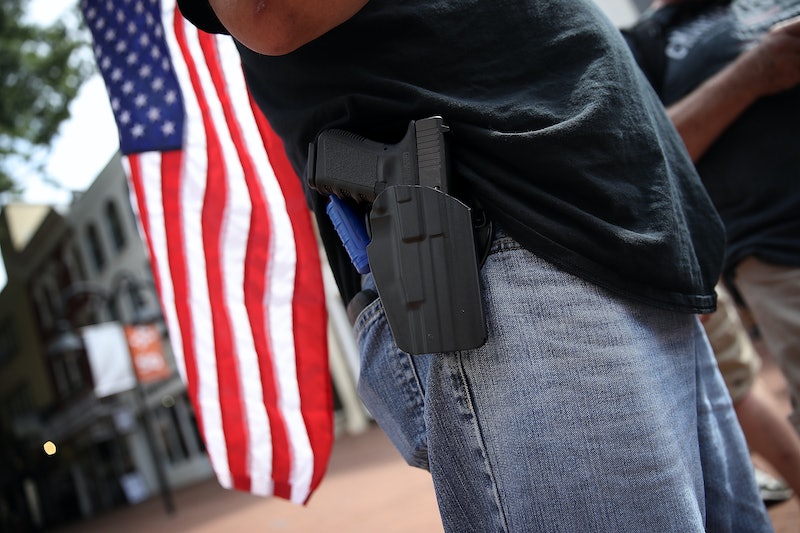 One of the strongest gun control measures in the United States is the FBI’s National Instant Criminal Background Check System, or NICS. Though the process seems relatively simple — federally licensed gun dealers run a potential gun buyer's name through the FBI's database before selling them a firearm — it isn't foolproof. A problem becoming known as the "Charleston loophole" is putting guns in the hands of Americans who aren't allowed to have them. In fact, it's the very same loophole that allowed a white supremacist to buy a gun in 2015, which he later used to murder nine churchgoers in Charleston.

"There are so many things in federal gun law that are absurd, and this is definitely one at the top of the list," Laura Cutilletta, an attorney at the Giffords Law Center To Prevent Gun Violence, tells Bustle of the "Charleston loophole."

NICS was established in 1993 under the Brady Handgun Violence Prevention Act, and it's meant to identify people who are legally prohibited from purchasing guns. This includes convicted felons, people who've been involuntarily committed to a mental institution, undocumented immigrants, people with domestic violence convictions, and more. When a name is fed into NICS, the FBI conducts a background check and reports back to the gun dealer on whether or not the sale is legal.

Here's the loophole: If a gun dealer doesn't hear back from the FBI within three days of requesting a background check, they're allowed to sell the gun to the buyer anyway. Unlike some loopholes, this isn't some accidental consequence of carelessly written legislation; rather, it's explicitly detailed both in federal law and on the FBI's website. Gun sales like this, which are made even though the buyer hasn't passed a background check, are known as "default proceeds."

It's unclear what these people did that should have disqualified them from buying guns, as the FBI doesn't release such detailed data. In total, though, 43 percent of people who failed background checks in 2015 — and that includes folks who were successfully blocked from buying a gun — failed because they'd been "convicted of a crime punishable by more than one year or a misdemeanor punishable by more than two years." Another 19 percent couldn't pass a background check because they were a "fugitive from justice," while about 10 percent had either a conviction or restraining order stemming from a domestic violence accusation. More details on this are available in the FBI's 2015 report on gun sales.

When someone falls through the cracks in this manner and buys a gun they're not allowed to own, the FBI orders the Bureau of Alcohol, Tobacco, and Firearms to retrieve the weapon. USA Today reported on Monday that in 2016, the FBI issued over 4,000 orders to seize weapons from buyers who fell through the Charleston loophole that year. That's the most seizure orders the agency has issued in a decade, according to FBI data.

In 2015, someone who failed a background check but was allowed to buy a gun went on to commit a mass shooting. The white supremacist convicted of carrying out the 2015 Charleston church massacre had previously been convicted of possessing a controlled substance, which legally prohibited him from buying a gun. When he tried to buy a handgun, his name was fed into the NICS; thanks to a bureaucratic mix-up, however, the system didn't detect his conviction within the three-day window.

"The investigator had called the wrong county to look into this person's background," Cutilletta explains to Bustle. "They never got a response, and meanwhile, the three days elapsed, and the gun was [sold] by default."

The buyer then used that gun to murder nine people. He later said said that he did this in hopes of igniting a race war, and has since been sentenced to death.

In 2017, Democrats in the House and Senate introduced legislation to close the Charleston loophole. However, Republicans control both chambers, and GOP leadership hasn't put either bill up for a vote. In general, Congress has been incredibly reluctant to pass any form of gun control, largely due to opposition from Republican officials.

Luckily for gun control advocates, though, state lawmakers also have a say in how background checks are conducted. As of 2015, at least 15 states plus Washington D.C. have enacted legislation that gives law enforcement more time to conduct background checks before gun dealers are allowed to proceed with a sale, according to Everytown Research. Delaware enacted a similar law the next year.

"It's easier to get things done at the state level, and unfortunately, that's what's had to happen," Cutilletta tells Bustle.

As long as Republicans control at least one chamber of Congress, it's unlikely that background check laws will be strengthened any time soon on the federal level. But there's much more room for progress at the state level, which means your advocacy can make a difference. If you want to close the loophole and promote a stricter background check process, vote pro-reform canidates into state office at every possible election. And though closing the Charleston loophole seems like a small feat in the larger scheme things, it could stop thousands of people who shouldn't have guns from getting their hands on them in the first place.