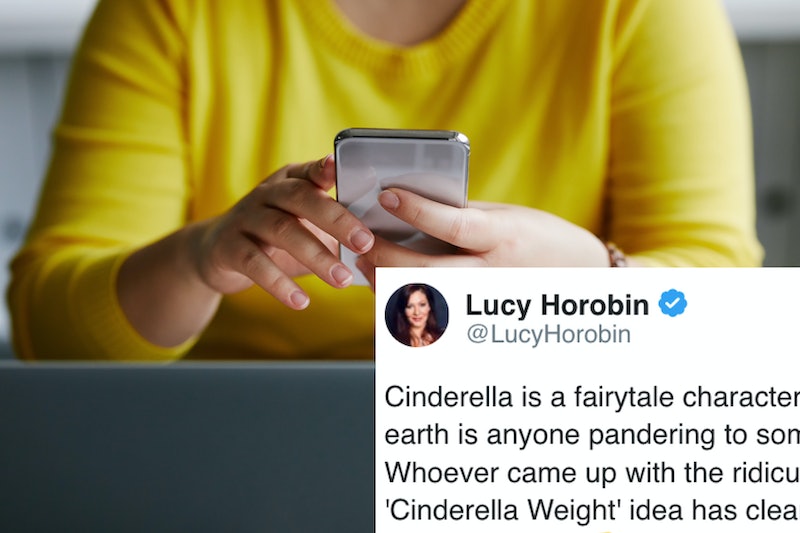 Warning: This article contains information about disordered eating, which some may find triggering.

Another day, another terrible, body-shaming social media “challenge.” This time, it’s the “Cinderella challenge” that’s sweeping social media platforms — although if you’re wondering, “What is the ‘Cinderella challenge,’ exactly?” it’s nothing you haven’t seen before: It uses an absurd and nonsensical technique to measure “health” that actually just measures whether or not someone fits an unattainable and arbitrary standard of beauty. The fact that this is just one in a long of other troubling internet trends (see also: The “collarbone challenge,” the “paper waist challenge,” etc.) doesn’t make it any less harmful, of course — and, indeed, the fact that these kinds of “trends” have become a trend in and of themselves is perhaps the most troubling thing of all.

According to Japan Today, the “Cinderella challenge” — named for the titular fairytale heroine, frequently depicted in illustrations, movies, and other media with a teeny-tiny waist — comes out of Japan and is based on the Body Mass Index (BMI). “[BMI] is a measure of body fat based on height and weight,” registered dietitian nutritionist Maya Feller, MS, RD, CDN, CLC, explains to Bustle in an email. In the United States Customary System (USCS) of measurement, it’s calculated by dividing a person’s weight in pounds by their height in inches squared, then multiplying the result by 703. “Based on this number, a person is placed into a category [of] underweight, normal weight, overweight, or obese,” says Feller.

There are, of course, a lot of things wrong with this “challenge.” Let’s start with the formula itself: It’s sort of a reverse BMI calculation — that is, instead of using your height and weight to calculate your BMI, it uses your height and a BMI of 18 to calculate the “Cinderella weight.” Trouble is, a BMI of 18 is classified as “underweight” for a lot of people — and moreover, BMI is a terrible way to measure health to begin with.

We’ve long known that BMI numbers can be misleading. “BMI is not a terrific measure of health specifically because it does not take body composition into consideration,” says Feller. “For example, when someone is muscular, the calculations can be overestimated. Age, gender, ethnicity, [and] physical activity are also not generally considered when someone plugs their data into a BMI calculator.”

Perhaps most importantly, however, is this: “Every body is different,” stresses Feller. “We cannot all be measured against the same standard. Young women in particular are at risk for engaging in unhealthy and restrictive food related behaviors based on BMI outcome. Popular culture tends to promote unrealistic images of beauty and health. And BMI should never be the only clinical tool used as a measure of one’s health.” Indeed, according to a study of 40,420 adults in the United States published by researchers working out of the University of California, Los Angeles in 2016, if BMI is used as the only measure of health, it would misclassify nearly 75 million adults. That’s nearly a quarter of the entire U.S. population.

What’s more, fatness and fitness are not exclusive. As Trevor Thieme wrote at Vice Tonic in 2017, “Most research... shows that exercise has a distinctly beneficial effect on health regardless of where you land on a BMI chart.” Thieme pointed to two studies to underline this point: One from 2011 that found “a healthy diet and moderate exercise can reduce obese people’s risk of cardiovascular disease and diabetes regardless of whether they lose weight or not,” and one from 2015 that found that “only… individuals that were inactive were at a significantly increased risk for all-cause mortality.” As Thieme summed it up, “Translation: Being obese and physically active makes you less likely to die than being skinny and inactive.”

And that’s the thing with the “Cinderella challenge”: It promotes unrealistic beauty standards that actually have very little to do with health at all — and it shames anyone who doesn’t meet them, to boot.

In many ways, it’s unsurprising that the “challenge” originates in Japan. A historically image-conscious society, people of all genders deal with constant pressure to conform to beauty ideals that are virtually impossible to attain. For women in particular, the ideal is to be thin, feminine, and kawaii — and according to a report on GaijinPot, an English-language Japanese lifestyle site and resource, Japan’s Health Ministry’s annual surveys on health have shown that the number of underweight women in Japan in their 20s, 30s, and 40s is on the rise, likely due to the societal pressure to meet this ideal.

But these unattainable and unrealistic beauty standards exist outside of Japan as well, of course; many countries including the United States also value thinness over fatness, as well as erroneously conflating fatness with immorality. Research has found time and again that people perceive fat people in the workplace as less competent, less intelligent, less productive, and lazier than straight size people — even though fatness has absolutely nothing to do with any of those qualities. Kids begin ostracizing fat children in their peer groups from an incredibly early age. Implicit bias against fat people is a major issue in medicine.

None of this is OK — but things like the “Cinderella challenge” just serve to reinforce it all. It says that to be a “princess,” you have to be thin — possibly dangerously so — and suggests if you fail to meet that “challenge,” then you’re not worthy of all the love and attention that princesses attract.

There is a silver lining to be found here, though: Many responses to the “challenge” on social media are calling it out for its problematic nature. This kind of response suggests that things are changing — that people are no longer willing to accept the arbitrary beauty standards foisted upon us by our culture, and that we are no longer willing to sit back and let it attack anyone who doesn’t cleave to them.There’s obviously still a long way to go yet — the fight for body positivity is ongoing — but it’s encouraging all the same.

Be a princess if you want. Or don’t be one, if you don’t want. But either way, all bodies are good bodies — whether or not they the “succeed” (and I use that term very loosely indeed) at the “Cinderella challenge.”