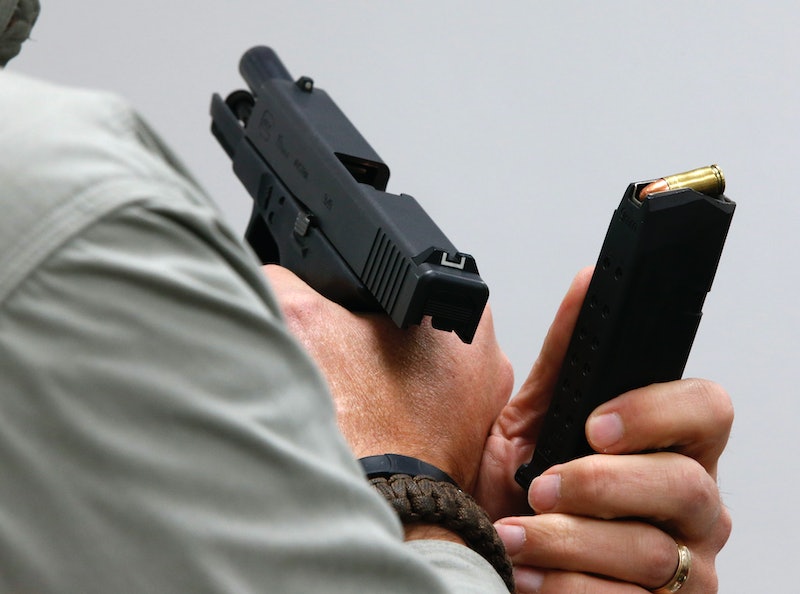 After the tragic shooting in Las Vegas on Sunday night, two pro-gun bills that are currently making their way through the GOP-controlled House that could dampen efforts for stricter gun control laws in the U.S. One of them is the Concealed Carry Reciprocity Act, which would nationalize concealed carry and allow gun owners to travel freely between states without adhering to local concealed carry laws, essentially creating a driver’s-license-style system for gun ownership.

Republican Rep. Richard Hudson and Sen. John Cornyn sponsored the bill and say that the act would give gun owners the right to concealed carry if they have a valid photo ID, are licensed, and are allowed to carry a concealed handgun, according to column Hudson wrote for The Hill. Hudson says that he doesn't believe that the legislation would make it easier for people to obtain a gun.

"My bill is simple and common sense. It would provide law-abiding citizens the right to carry concealed and travel freely between states without worrying about conflicting concealed-carry state codes or onerous civil suits," Hudson wrote. "The individual would have to follow the laws of the state, county and municipality in which they are carrying concealed."

Introduced to the House back in January, the Concealed Carry Reciprocity Act has received criticism for its potential to bring more guns into cities and to make it harder for police to stop gun violence.

Additionally, the bill specifies that a qualified individual who lawfully carries or possesses a concealed handgun in another state: (1) is not subject to the federal prohibition on possessing a firearm in a school zone, and (2) may carry or possess the concealed handgun in federally owned lands that are open to the public.

The bill would allow gun owners to carry firearms over state borders and override federal restrictions on carrying a gun in a school zone and in federally owned public areas. Currently, 42 states require a state-issued permit to carry a weapon in public.

Vance believes that the bill could result in bringing in 2 million more guns into New York.

New York mayor Bill de Blasio and Chicago mayor Rahm Emanuel wrote a resolution during the U.S. Conference of Mayors in June condemning the legislation, according to Politico.

They wrote that the new concealed carry law "would essentially force the localities to give full faith and credit to permits that are issued on less rigorous grounds, remove local governments’ ability to maintain sensible gun standards, and keep a proper vetting process in place...."

Another source of opposition to the bill is the law enforcement officials who would have more difficulty in their jobs if the Concealed Carry Reciprocity Act passes. Jim Johnson, Baltimore County Chief of Police, told the Trace that the proposed measure puts police officers in danger, forcing them “at 2 o’clock in the morning” to deal with gun owners with out-of-state credentials.