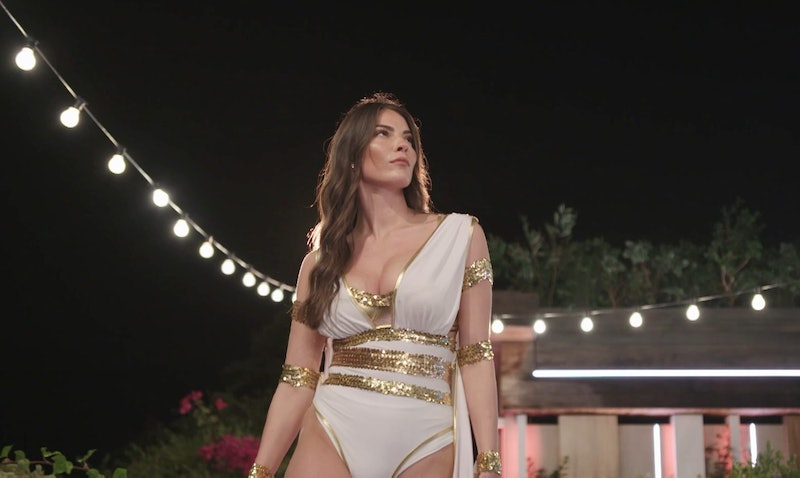 Love Island has done it again. I'm not talking about the show causing "controversy" or becoming the most-discussed series in your office, but the fact it has sparked yet another important conversation. This time, about birth control. When new addition Rebecca entered the villa, some viewers noticed a square-shaped plaster on her thigh. And while it could well be a nicotine patch, chances are the 21-year-old is wearing a contraceptive patch.

Almost immediately, Twitter kicked off. Unfortunately, some users "shamed" the Love Island contestant for daring to show off contraception. Several women, however, were shocked they'd never heard of the patch. "Mad I've had to learn this through Love Island, rather than in school or the GP," one person tweeted. Another wanted to know if anyone had ever been offered the patch by their doctor.

If you've never heard of the sticky wonder or are looking to find an alternative form of birth control, here's everything you need to know about the contraceptive patch.

Per the NHS, there is only one patch brand in the UK, and it goes by the name of Evra. Resembling a plaster, the patch measures around 5 x 5 cm, states Family Planning Association (FPA). This contraceptive is similar to the combined pill in that it contains the same hormones — oestrogen and progestogen. But instead of being administered orally, the hormones enter the bloodstream through the skin.

The patch works to prevent pregnancy in three ways, states the NHS:

The patch can be applied anywhere, as long as skin is dry and clean and doesn't have a lot of hair. However, you should avoid sticking it to breasts, any irritated patches of skin, or areas that come into contact with tight clothing (hence why Rebecca's likely not wearing it under swimwear.) It's also best to avoid putting creams or lotions over the patch as this can cause it to fall off, states sexual health charity Brook.

Each patch is worn for seven days before being changed. After three weeks, you have a week off and, in this patch-free week, you may experience a withdrawal bleed.

When first prescribed with the patch, you'll be given a three-month supply. According to the NHS, it immediately protects from pregnancy if first used between the first and fifth day of your period. If first used after this, use additional contraception, such as condoms, for seven days.

Who can use it?

Most people can safely use the contraceptive patch up until the age of 50, says FPA. But, as with most forms of contraception, it's not suitable for all. Pregnant people cannot use the patch. Neither can those who are breastfeeding a baby younger than six weeks, those aged 35 and over who smoke, or those over 35 who only stopped smoking less than a year ago.

Taking certain medications, including some antibiotics, can also make you unsuitable for the patch. If you've ever had blood clots in veins or arteries, heart problems, high blood pressure, or diabetes, you should also avoid the patch. This, too, applies to people with history of lupus, breast cancer, or migraine with aura. (A doctor will advise on all of the above.)

The patch has an obvious advantage: unlike the pill, you don't have to worry about it every single day. But the patch comes with a bunch of other benefits too. When used perfectly, it's more than 99% effective at preventing pregnancy, states the NHS. (Per FPA, typical use reduces its effectiveness to 91%).

It's even effective in situations where the pill isn't, such as if you vomit or have diarrhoea, and can help with heavy or painful periods, acne, and problems linked to polycystic ovary syndrome (PCOS).

Although the patch is pretty hardy, it may fall off on occasion. And you do need to remember to change it each week. If it does fall off, and has been off for less than 48 hours, put the original one back on or apply a new one. (If you've had it on for six days or less, use extra contraception for a week, advises the NHS.) But if it's been off for 48 hours or more, you'll need to apply a new one, start a new patch week, and use additional contraception for seven days.

If you forget to change your patch, the same rules apply. Forgetting for less than 48 hours means you can put a new one on and use as normal. But if it's been left for more than 48 hours, put on a fresh one and use extra contraception for the next week.

Some people may experience mild side effects on the patch, including headaches, nausea, and mood changes. However, these usually only last for a few months, notes the NHS. More serious side effects do exist including blood clots, heart attacks and strokes, but these are rare.

More like this
The Week 'Love Island' Turned Into 'Disrespect Island'
By Victoria Sanusi
Everything We Know About Gemma & Jacques’ Relationship – & Break-Up
By Frances Stewart
Twitter Has *Many* Thoughts On Amber & Ikenna’s Dumping From ‘Love Island’
By Frances Stewart
Yes, Luca Bish Really Doesn’t Drink Alcohol
By Shahed Ezaydi and Sophie McEvoy
Get The Very Best Of Bustle/UK