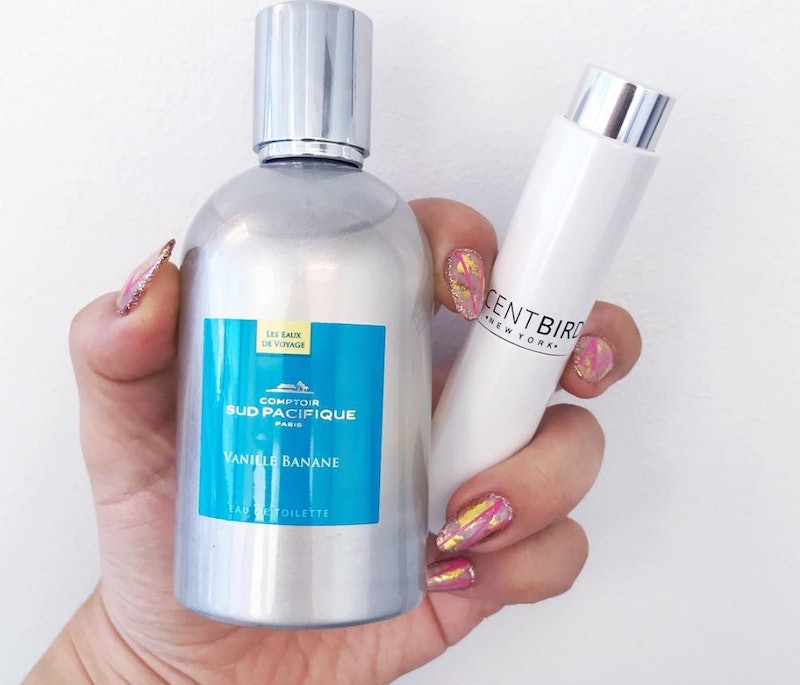 When it comes to perfume, you usually focus on the intermingling of notes, how the fragrance smells when it dries down, how it interacts with your body chemistry, and what it reminds you of. That's because scent is so closely linked to memories. Did you ever stop and wonder why some are fragrances are called "Eau de Toilette" while others are tagged as "Eau de Parfum?"

The terms are not arbitrary — they actually mean something very specific and scientific. Fragrance expert and Scentbird CEO Mariya Nurislamova has decoded these perfume labels exclusively for Bustle.

What's the major difference eau de toilette, eau de parfum, parfum, and absolu? It has to do with the concentration — and ultimately a scent's strength.

"When you buy alcohol, the label on the bottle will tell you exactly how much alcohol by volume is included in your purchase," Nurislamova tells Bustle. "The same rule applies to perfume — only it's written in French. Designations like 'eau de toilette' and 'eau de parfum' on a perfume label are actually indicators of how strong a perfume is."

Here's a further breakdown of the definitions and labels.

An eau de cologne is 3 to 5 percent perfume oil. These fragrances are "mostly light, bouncy, throw-and-go men's citrusy scents," according to Nurislamova.

The eau de toilette is 5 to 10 percent perfume oil. It's also "the most common form of perfume on the market," Nurislamova states. "This style usually lasts between three to six hours on the skin."

The eau de parfum is 11 to 20 percent perfume oil. Nurislamova explains that, as a result, these scents "are stronger and more complex than an eau de toilette and last longer as well." Generally speaking, a quality EdP should last for around five hours on skin. It should even go the distance and linger for a good eight hours — basically as long as your work day.

Lastly, a parfum/extrait/absolu is the highest concentration of perfume oil by volume. It's usually 20 percent and higher. That makes them intense!

"These are monster scents with tremendous range and volume to be worn lightly," says Narislamova. "Expect a scent this powerful to greet you in the morning to still [be] going strong."

While the above-referenced percentages are a "general range that most perfumes fall within," Narislamova does "note" that some perfume houses will go rogue and up the ante with their formulations.

She says, "Occasionally, you will find a perfume house that will tip the scales in their designations — an eau de toilette can come in at 20 percent in some lines."

Next time you are shopping for a new signature scent, you will be armed with knowledge and can sniff more effectively. If you are seeking something impactful but not too strong, you'll like want an eau de toilette. If you want a power perfume that stays all day, you'll seek out an eau de parfum.

And that concludes our fragrance lesson for the day!