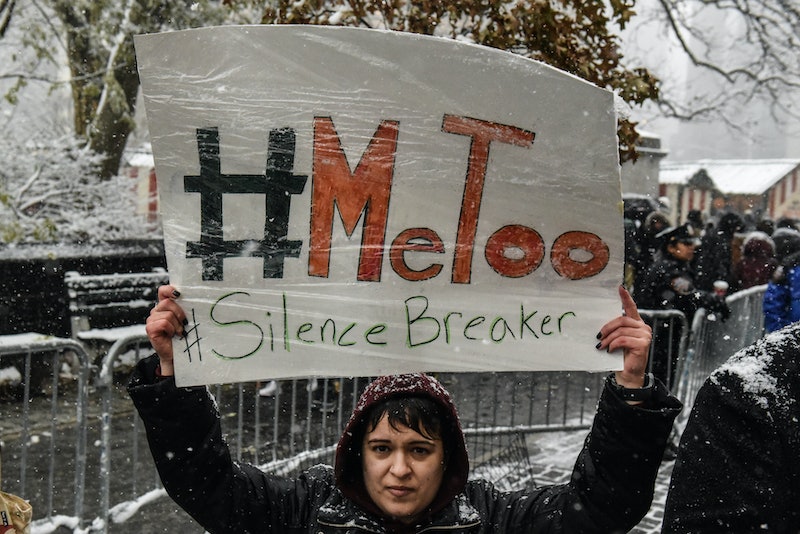 Proposed legislation designed for the #MeToo era has made it to Congress. Members of the House plan to introduce the bipartisan EMPOWER Act on Wednesday, aimed at combatting workplace harassment and making it less dangerous for employees to come forward about inappropriate behavior.

"The Me Too movement has exposed the pervasive issue of sexual harassment that cuts across all industries, depriving workers of dignified work environments and the ability to support their families," Rep. Lois Frankel (D-FL), one of the bill's sponsors, says in a statement to Bustle. "By lifting the veil of secrecy and increasing transparency and accountability, the EMPOWER Act will create more respectful and equitable workplaces.”

After Sens. Kamala Harris (D-CA) and Lisa Murkowski (R-AK) introduced a version of the proposed law last month, Frankel and other members of the House will introduce a sister bill this week. The EMPOWER Act, which stands for Ending the Monopoly of Power Over Workplace harassment through Education and Reporting, has been endorsed by at least 21 advocacy organizations, including the National Women’s Law Center and the Human Rights Campaign.

The bill's main goals are to outlaw non-disparagement and non-disclosure agreements in employee contracts, require public companies to disclose settlements, establish a confidential tip-line for reporting, and reform the tax code to ensure survivors aren’t penalized.

"Harassment and discrimination persist because employers have virtually unlimited control to silence employees who complain when they face illegal treatment on the job," Terry O’Neill, executive director of the National Employment Lawyers Association, said in a statement. "This bill would stop employers from imposing their one-sided terms on victims of workplace abuse, and ends the tax penalty on those who succeed in holding their employers accountable."

The current tax penalty occurs when an employee wins a harassment suit, and the bill aims to protect plaintiffs’ awards and settlements as nontaxable income. If passed, the proposed law would also prohibit companies from receiving tax deductions for expenses and attorneys’ fees related to harassment cases, as well as the money paid in court-ordered compensation to survivors.

As for non-disparagement and non-disclosure agreements, the bill would make it illegal for employers to include clauses covering workplace harassment. Non-disparagement clauses are common in standard employment contracts in many industries, but especially in Silicon Valley, according to a 2017 New York Times report.

Employees increasingly “have to give up their constitutional right to speak freely about their experiences if they want to be part of the work force,” Nancy E. Smith, a partner at the law firm Smith Mullin, told The Times last year. “The silence sends a message: Men’s jobs are more important than women’s lives.”

The EEOC would also create a confidential tip-line under the proposed law that would supplement the agency's formal complaint system. The data would be shared with state-based Fair Employment Practice Agencies, which would then decide whether or not to take action against an employer.

The bill's summary cites the Bill O'Reilly case, in which the Fox News host was fired last year after The Times reported that he settled multiple harassment claims, as proof that "disclosures thus have a demonstrable effect on companies." In order to create more transparency, the bill would require public companies to disclose harassment settlements to the U.S. Securities and Exchange Commission.

"Ultimately, there is a monopoly of power in workplace harassment — those who control a paycheck, or a reputation, or a promotion have the power to perpetrate harassment, to protect harassers, and to silence victims," an official summary of the bill reads. "This moment calls for action. Workplace harassment is illegal, but still ubiquitous. We must address gaps in the law that make it so."