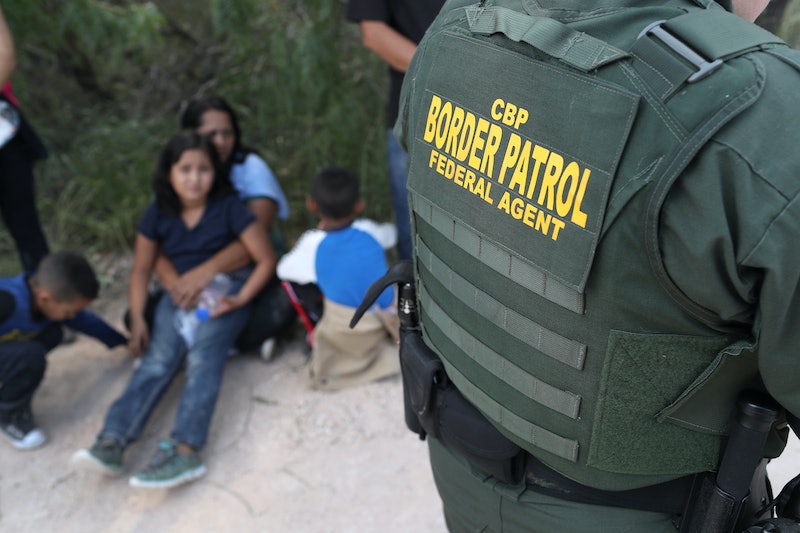 One of the buzzwords surrounding the legality of the migrant family separations that the Trump administration announced last month is from a court case in the 1990s. Flores v. Reno, or the "Flores settlement," placed limits on how and how long the government could detain child migrants. Now, Trump's executive order to end family separations is likely at odds with it, and what the Flores Settlement Agreement says could shape what happens to families at the border.

The Flores Settlement Agreement was reached following the case of Jenny Lisette Flores, a 15-year-old girl from El Salvador who fled the country's civil war and made her way to the United States to meet her mother, who was already living in California. Immigration and Naturalization Service was in charge at the time of apprehending people who crossed without papers, and they put Flores in detention for two months.

The conditions of that detention were inappropriate for a child. She was housed with adults of both sexes and subject to regular strip searches. Kids were held at an old motel which was fenced in with barbed wire and had no school, no possibility for exercise (the pool was drained), and didn't even offer contact with parents.

As a result, the Center for Human Rights and Constitutional Law sued with four plaintiffs including Flores, with Carlos Holguín as the general counsel. He told NBC News:

The basic thing we were trying to accomplish was first to do away with indefinite detention (of children) or the children being used as bait to arrest the parents. Second was to improve the conditions where they were being held.

The case worked its way through the courts for more than a decade until it was finally agreed upon what would happen in the Flores Settlement Agreement. It "sets out nationwide policy for the detention, release, and treatment of minors in the custody" of the government's immigration and border control agencies.

The main part that is important to the current discussions is that children must be released "without unnecessary delay" to (in order) a parent, a legal guardian; an adult relative (brother, sister, aunt, uncle, or grandparent). A licensed program came after.

Therefore, it is illegal to detain a child even if they are with their parents. That is what the courts found when they were asked to clarify the matter for the Obama administration, which tried to detain whole families in 2015 as border crossings increased. But a judge ordered that those women and children be released.

Elora Mukherjee, a law professor at Columbia University who represented some of the affected women, at the time said that the courts' "decision confirms that the mass detention of refugee children and their mothers violates U.S. law.

Now, the Trump administration would like the courts to reverse that decision. Department of Justice lawyers have asked the courts to modify the Flores Settlement to allow for families to be detained together. "We ask for immediate interim relief from this Court that would permit family detention during immigration proceedings," the filing reads.

The DOJ wants: "a limited exemption from its construction of the Flores Settlement Agreement’s release provisions so that ICE may detain alien minors who have arrived with their parent or legal guardian together in ICE family residential facilities."

DOJ writes that this is needed due to "the ongoing and worsening influx of families unlawfully entering the United States at the southwest border." It's also the only way that Trump's executive order can hold. He's ordered for the construction of new and reallocation of existing facilities that can be used to detain entire families.

But that will only work if the courts agree that doing so does not contradict Flores.