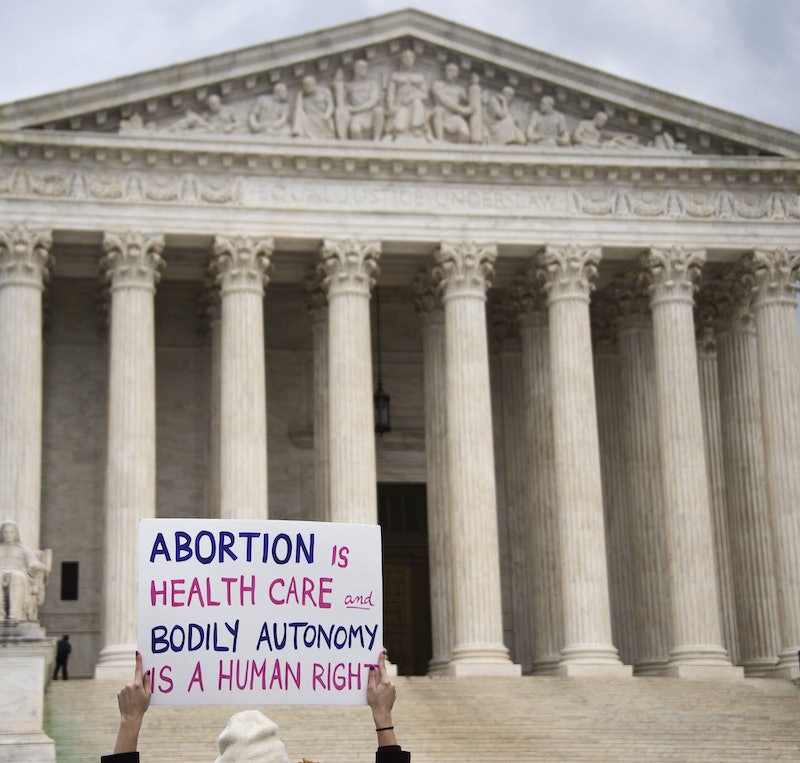 The House of Representatives passed a bill Tuesday that would permanently end federal funding of abortions via Medicare and possibly limit your ability to use private insurance to pay for one too if you use an Obamacare plan. Despite the millions who marched for women's rights on Saturday, President Donald Trump and the House Republicans seem intent on attacking reproductive rights in any way they can. But this fight did not just begin Tuesday, or with Trump's election. In fact HR 7 makes the Hyde Amendment, an already existing rule, permanent.

Not familiar with it? That's not surprising because it has existed for 40 years and is named after the Illinois representative Henry Hyde who first introduced it in the 1970s, shortly after Roe v. Wade made abortion legal across the country. Since then, the rule has been added to appropriations bills each and every year, restricting federal funds for abortion services — essentially making it illegal for federal Medicaid dollars to pay for abortions for poor and low-income women. Since 1994 there have been exceptions for cases of rape, incest, or when the woman's life is in danger.

Until very recently it was considered a third rail in abortion politics — neither side was willing to touch it. That fight reignited first in 2015, when Republicans tried to expand the Hyde Amendment to a bill that was meant to help victims of sex trafficking. Then repealing it altogether became a focus of Democrats in 2016; supporting repeal was even added to the party platform and Hillary Clinton ran with repeal as part of her proposed policies, bringing it up at campaign rallies since at least January 2016.

And now the Republicans, with a majority in both houses and Trump in the White House have decided to go after it too in the form of HR 7. Passed Tuesday with a vote of 238 to 183, the bill would make the Hyde Amendment permanent law. In other words, it wouldn't have to be passed again every single year within an appropriations bill in order to be enforced.

HR 7's full title, No Taxpayer Funding for Abortion and Abortion Insurance Full Disclosure Act of 2017, implies that the whole thing is new, but most of it has existed since the '70s. The most troubling new part is the restriction of abortion on multi-state insurance plans in the Obamacare exchanges, which could affect millions more women. HR 7 will also limit abortion access for federal employees, military women, and Peace Corps participants.

The Hyde Amendment has been unjust for 40 years and making it a permanent law is not the answer. According to the Guttmacher Institute, 75 percent of women who have abortions are poor or low-income, and by limiting their insurance means they have to pay for healthcare out of pocket. In 2014, an abortion averaged at about $575 if you paid out of pocket. That's an exorbitant amount of money for some people, as much as one third or more of their monthly pay.

As Clinton said on the campaign trail, "We need to protect access to safe and legal abortion, not just in principle, but in practice. Any right that requires you to take extraordinary measures to access it is no right at all ... not as long as we have laws on the books like the Hyde Amendment, making it harder for low-income women to exercise their full rights." HR7 is an even scarier version and it must be defeated.

This is probably not the last bit of anti-abortion legislation that will pass the House. So be prepared to take that energy from Saturday and use it to fight these next four years. Call your representative and senators today.