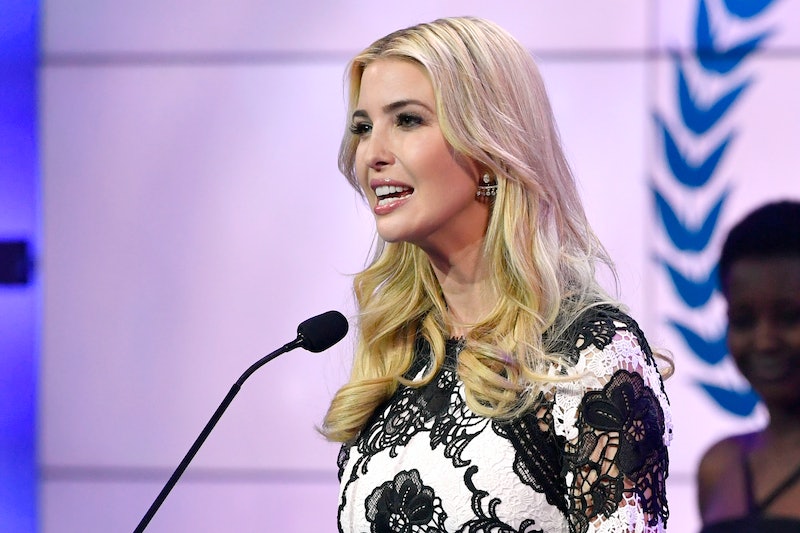 If you're an advocate for more women around the world getting involved in business, then you might already know what the "Ivanka Fund" is. But if you don't, you might find it somewhat surprising, given the overall direction of the Trump administration.

Since entering office, President Donald Trump has advocated for less spending on international causes, as his budget proposal last year included deep cuts to foreign aid. But as The Atlantic detailed on Wednesday morning, the president's daughter, Ivanka Trump, was instrumental in the formation of the Women Entrepreneurs Finance Initiative in the World Bank, also known as We-Fi.

The ostensible purpose of the fund — which the publication refers to as the Ivanka Fund — is pretty straightforward: to increase the number of women who own nascent businesses and enterprises around the world.

As it stands now, as detailed by The Atlantic's Annie Lowrey, the number of women-owned businesses around the world is pretty anemic, and We-Fi's objective is to address that situation. According to the fund's website, women own just 30 percent of the formal small and medium-sized enterprises throughout the world. The fund was first announced at the G-20 summit in July of last year.

It was announced in August 2017 that Ivanka, despite helping with the initial formation and raising of the fund, would not have any official role in it going forward, likely owing to the potential issues raised by her being a member of the American government. Rather, the fund is officially run by the World Bank. Bustle has reached out to the White House for comment.

That said, even having only been involved in the early days of the fund, the We-Fi likely represents the most fully realized policy effort of Ivanka's entire time in the White House ― although, again, it's a program being run by the World Bank, not the administration itself.

It's an especially significant achievement for Ivanka as compared to some other areas where she reportedly disagrees with her father ― like climate change and the Paris climate accords ― that have long since gone by the wayside.

The first round of funding allocations were announced on April 19, 2018, and will include, according to the fund's website, money for women's entrepreneurial initiatives in countries like Mali, Nigeria, Yemen, and Sri Lanka.

There's a distinct reason that it sticks out for Ivanka to have played a role in the creation of this fund, in a way that it probably wouldn't if the current president were more traditionally respectful towards foreign countries. Back in January, for example, Trump reportedly derided a number of nations in Central America and Africa as "sh*thole countries," mere weeks after he reportedly claimed that some 15,000 Haitians traveling to the U.S. "all have AIDS." Trump and the White House denied both remarks were actually made.

As the piece in The Atlantic noted, the fund was also met with immediate controversy and scrutiny, thanks both to some of its donors, and the potential ethical issues it presented back when Ivanka was more integrally involved.

In the first place, it was already a breach of longstanding norms against nepotism that Ivanka and her husband Jared Kushner took on jobs in the administration to begin with. And, given the potential for foreign and non-governmental officials alike to seek influence with Trump, if his daughter were actively running such a multi-billion dollar fund, it would greatly increase the potential for accusations of pay-to-play.

These sorts of accusations were highly relevant during the 2016 presidential election, when then-candidate Trump regularly attacked Democratic presidential nominee Hillary Clinton over her role with the Clinton Foundation.

Once again, however, Ivanka is no longer involved in the fund's management, although she has continued to publicly advocate for it. In Oct. 2017, she touted it as a means to "support women entrepreneurs around the globe."

With the first round of funding having been announced just last month, it's still a little too early to judge whether it'll be a success or not. But from the perspective of a presidential administration that's proposed cutting funding for foreign aid rather than increasing it, Ivanka's founding role in the effort is definitely noteworthy.