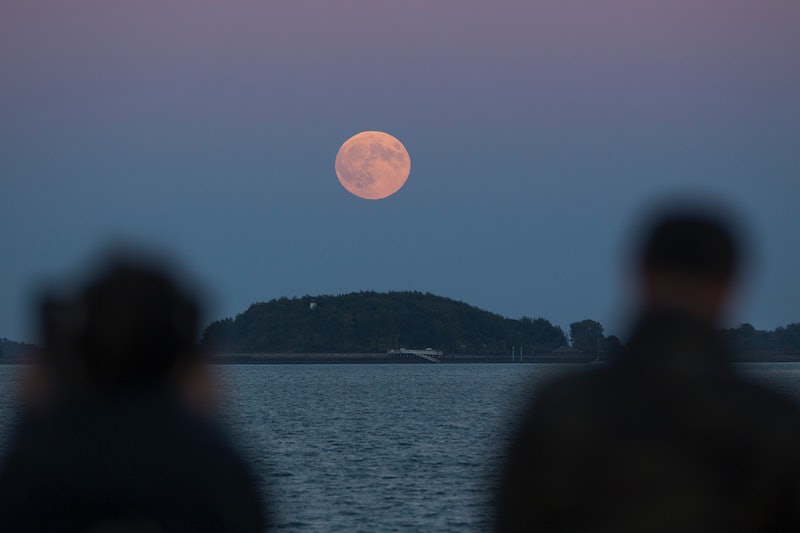 If you needed more reason to be optimistic about January 2018, good news: The month will host a celestial event that hasn't occurred in 152 years. Talk about starting the new year in a special way! Specifically, there will be two full moons throughout January 2018: The full wolf moon on Jan. 1, and the super blue blood moon on Jan. 31. I know, I know — you're 100 percent wondering what the January super blue blood moon is, because... well, look at that name. It's intense. How can a moon be super, blue, and also a blood moon? Apparently, in space, anything is possible. And, as the cherry on top, it's also going to be an astronomically rare happening that's definitely worth braving the cold to observe.

OK, so, here are the deets. January's second full moon will occur on Jan. 31 and in addition to being a supermoon (which means it'll look pretty big in the sky), will be called a "blue moon." This doesn't mean it'll be blue, though — it's just rare, and called a blue moon because it's the second full moon in a month. Additionally, it'll also be a blood moon, which means it'll sport a red hue as it hangs low in the sky. This is because it'll coincide with a lunar eclipse — as the super blue blood moon rises and lines up perfectly with Earth and the Sun in Jan. 31, it will reflect sunsets and sunrises, because our planet will be blocking out the sunlight that typically reflects off the moon. The result is a red hue.

I know, I know. This is a lot. To fully understand all of the components of this month's lunar attributes, let's break them down individually. That way, you can help people out when their tongues get tied and their brains get fried while they try to comprehend January's moon situation.

A super moon is a full moon that occurs during the moon's closest proximity to Earth, in its orbit. They make the moon look brighter and closer than normal, which can make them appear larger. While it sounds very exciting and grand, many super moons are totally undetectable to the naked eye. The difference in size and brightness is so slight that most super moons look like regular full moons, even if they are super.

The origins of the blue moon name are vast and varied. While some people think the name came from the French term "la deux lune," which spoken quickly might sound like "blue" or "bleu" moon, many others attribute the astrological name to the literary phrase "once in a blue moon" because it's a somewhat rare event happening only every two and a half years. Regardless of where the name came from, the second full moon of the month of January is certainly not blue. According to astronomers, the blue moon has two definitions: The first is that it's the third full moon in an astronomical season that hosts four full moons. The second being that it's the second full moon in a month with two full moons. In Jan. 2018, the latter will be true.

The blood moon is actually a component of the lunar eclipse. The moon will turn a warm, dusty red color during the totality portion of a lunar eclipse. The reason it turns this color is because the moon will be in the Earth's shadow, blocking the normal illumination from the Sun during the eclipse. However, some light will still pass through the Earth's atmosphere and bounce forward to the moon's surface. According to NASA scientists, the color red is the most durable color for travel and can more easily make its way to the moon's surface, whereas other colors will be scattered and dispersed in the Earth's atmosphere. Additionally, the presence of dust and particles in the atmosphere can also create and orange and red tint to the moon's appearance.

In the morning hours of Jan. 31, a full lunar eclipse will occur — though for the eastern parts of the United States, it might be hard to see, due to the moon's low height in the sky during the fullest phase of the eclipse. This event occurs when the moon passes through the Earth's shadow. When this happens, the light from the Sun that's normally reflected on the moon's surface is blocked. Instead of going completely dark, the moon will turn to a dusty shade of red, giving it an eerie and exciting glow.