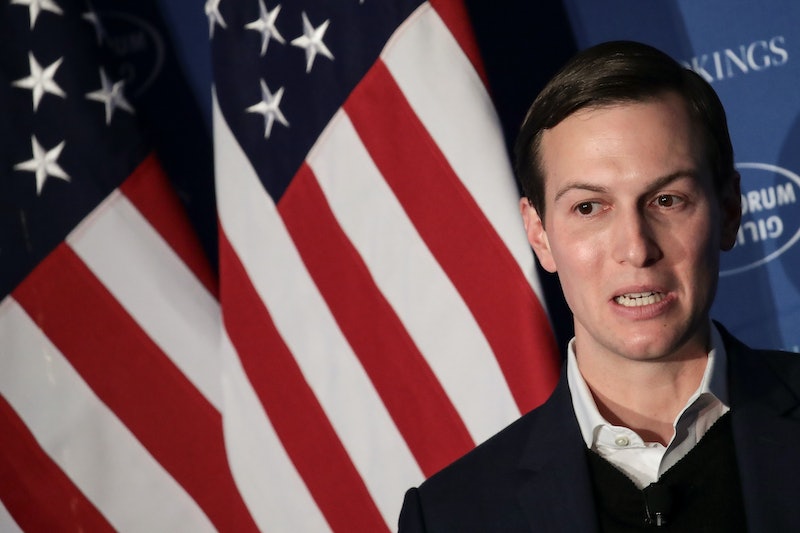 On Friday, a lawmaker in Maryland introduced the "Jared Kushner Act," a piece of legislation that would limit the circumstances in which renters can be arrested for not paying their rent. The bill is named, of course, after President Trump's son-in-law, whose real estate firm often seeks arrest warrants for tenants who fall behind in their rent payments. A spokesperson for the firm said in a statement that the bill is "politically motivated."

When landlords take tenants to court for not paying rent, they have the option of asking the judge to issue an arrest warrant (technically a "body attachment") for the tenant in question. When this happens, tenants who can't afford their bond can end up in jail. The Jared Kushner Act, introduced by state delegate Bilal Ali, would make it illegal for judges to issue such warrants in cases where a tenant owes less than $5,000 in rent.

A spokesperson for Kushner Companies criticized the legislation, and said that the lawmakers who sponsored it were being "petty."

"It is clear that this proposed bill with its proposed name is politically motivated,” the spokesperson, Christine Taylor, said, according to The Hill. “For a couple of local politicians to sponsor a bill called the Jared Kushner Act when neither Kushner Companies nor Jared Kushner, when he worked at Kushner Companies, had anything to do with these issues is petty."

But Kushner Companies does appear to have something to do with these issues. The Baltimore Sun reported in August that the firm — which Kushner still owns but hasn't worked for since joining the White House — has sought the civil arrest of more delinquent tenants than any other landlord in the state since 2013. According to the Sun, 20 former tenants of the firm's various properties have been detained for failing to pay rent, and in total, Kushner Companies has collected $5.4 million since 2013 in judgments that were filed against tenants who owed, on average, $4,400 in rent.

“Government has always developed policies to financially protect wealthy institutions such as the Bank Bailout of 2008,” Ali told the Sun. “On the flip side, regressive policies that hurt and even incarcerate the poor have historically been the norm. This bill prohibits policies that were developed to hurt poor communities and jail poor residents.”

Taylor, however, told the Sun that Kushner Companies only sought body attachments for tenants who, in addition to falling behind in rent payments, had also failed to abide by at least two previous court orders related to their tenancy. She added that the company's legal counsel in Maryland "handled these matters consistent with other attorneys in similar situations there and in accordance with Maryland law."

Kushner Companies, and specifically the firm's Maryland properties, have been under increased scrutiny in recent months. CNN reported in October that the firm is being investigated by Maryland's Attorney General over its debt collection practices (although it's unclear if this investigation is specifically related to body attachments), and in February, a federal judge ordered the company to reveal the identities of its business partners as part of an unrelated lawsuit.

Tenants rights advocates have criticized Kushner Companies for seeking body attachments with such vigor. "As a multimillionaire who is the son-in-law of the president, it begs the question whether they should be spending all this time and money to pursue people who have fallen behind," Marceline White, executive director of the Maryland Consumer Rights Coalition, told Architectural Digest. "Obviously, people should be paying their bills, but arresting someone years after seems fairly extreme."

Ali represents Baltimore in the Maryland House of Delegates, the lower house of the state's legislative branch. Prior to serving in his current capacity, Ali was a community liaison in the Baltimore state attorney's office.

The Kushner Act, which is co-sponsored by four of Ali's Democratic colleagues, will take effect in October if passed. It hasn't yet been scheduled for a vote.