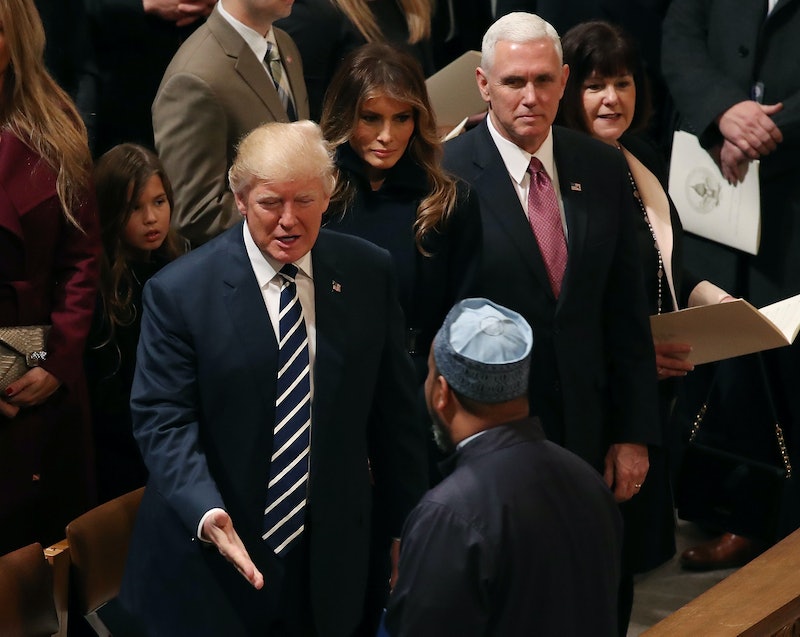 At the National Prayer Breakfast on Thursday, President Trump pledged to make it legal for churches and church leaders to engage in explicitly political speech and activity. Under current law, nonprofits and religious organizations with tax-exempt status are barred from public endorsement or criticism of political figures. As Trump is not exactly a paragon of religious zeal, to understand his plan for repealing the Johnson Amendment — "get rid of and totally destroy," as he put it — you have to assume that potential political gain is a major driving factor.

But removing the restrictions on political activities for tax-exempt churches may prove as much a windfall for his opponents as it is his own party. That is, if such a change can pass the inevitable constitutional challenges.

The Johnson Amendment is named for President Lyndon B. Johnson. While still a senator, he successfully pushed the legislation through Congress, and President Eisenhower signed it into law in 1954. The amendment bars nonprofits and religious organizations from engaging in explicitly political speech and/or action. For example, a pastor cannot encourage church-goers to vote for a specific candidate or ballot measure. Opponents have long claimed that this is an infringement on their freedom of speech.

On the same day Trump made his National Prayer Breakfast comments, Rep. Jody Hice and House Majority Whip Steve Scalise put forth a bill to help the president follow through on his promise. They introduced legislation that will essentially negate the Johnson Amendment, and seems to allow for churches to be as political as they want to be, provided the activity occurs during regular hours. Hice made a statement that referenced his experience as a Southern Baptist pastor. "I know just how important it is to ensure that our churches and nonprofit organizations are allowed the same fundamental rights as every citizen of this great nation," he said.

The Johnson Amendment does seem to pit two fundamental pillars of America against each other: the separation of church and state, and the freedom of speech guaranteed to all citizens. However, a closer look at the amendment's particulars erases this false simplicity. As Jason Hines points out at Liberty magazine, churches can already be as politically active as they want. They will simply forfeit the tax-exempt status afforded to religious organizations, should they so choose. At its most basic level, the Johnson Amendment is a detail of the Internal Revenue Service (IRS) tax code.

Another question facing religious leaders is whether or not church is a place for partisan politics. Churches are already clear to publish information on specific policies, and even put voter guides together. The Johnson Amendment simply bars them from voicing support for a particular candidate or party. Should this change, attorney Michael Peabody points out, "Large churches could bankroll entire political campaigns and receive favorable treatment from those who support them. Politicians could visit with church pastors and lobby them for their campaign support. The lines of mutual respect between church and state could be erased."

For Trump supporters like Jerry Falwell, Jr., president of Liberty University, that might sound almost too good to be true. Liberty has long hosted politicians, mostly of the conservative bent, with Sen. Ted Cruz even choosing to announce his 2016 campaign there. Falwell made no attempt to hide his love of Trump during the campaign, and has since been asked by the president to lead a task force on reforming higher education. Other ambitious church leaders may take note of the perks afforded those who turn the pulpit into a political megaphone.

However, gung-ho conservatives who see repealing the Johnson Amendment as a way to reap the benefits of church-goer votes might consider a study done earlier this year by the Pew Research Center. Black protestants were more likely to hear political messages at church than their white counterparts, and those messages were almost unanimously in favor of Secretary Clinton, and explicitly against Donald Trump. There are plenty of churches and church leaders who would probably welcome the chance to campaign hard for the Democratic Party.

Which circles back to the underlying question: Should churches be places of explicit politics? It is a tangentially legal question, but at its root, this is something religious leaders of all stripes must answer. Does their church exist to provide spiritual guidance and community for its members? Or should trying to exert its view of how the world should be via political means be the primary goal? Considering the diversity of thought in most churches, it seems impossible to do both.

Trump has made clear where he stands. It will be illuminating to see what other elected politicians agree to go along with his plans to repeal the Johnson Amendment.