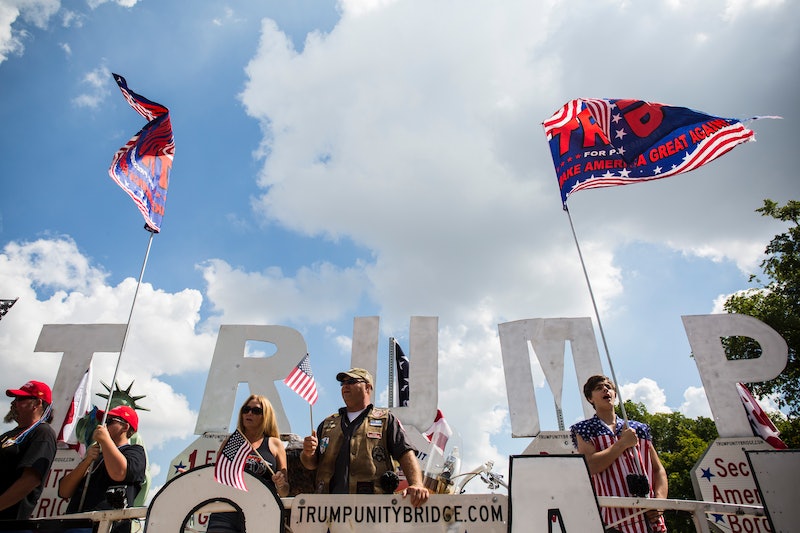 It's 2017, and American politics has took a bizarre turn. There was a little while where there were basically two political parties, and most political allegiances could be summarized along the lines of "liberal" or "conservative" and somewhere along the spectrum between the two. Of course, in the age of the internet, the insurgent political movement of Donald Trump, the politically independent streak among many young people, and whatever it is just making everything so strange, there are much more out-there political groupings than fit on a simple left-right political spectrum. So now, in addition to Republican and Democrat and whatever else, there is Kekistan, with its very own flag.

Kekistan is mostly a joke. Sort of. It grew out of the deep parts of internet culture, on 4chan's /pol/ message board. /pol/ is a haven for internet trolls, based initially on ideas of performative transgression — saying the most provocative and taboo thing possible — and eventually morphing into a new breed of white nationalism associated with the alt-right. 4chan has a large overlap with the gamer community, so the term "kek," a peccadillo coming out of World of Warcraft's chat system, infiltrated into the vernacular of the internet message board, used as a replacement for "LOL."

The term "kek" spent some time as a sort of signifier of those united by this strange part of internet culture, as opposed to "normies." At some point, this moved from implicit to explicit, with the idea of Kekistan, a fictional country that would be populated by the denizens of this internet subculture. They also at one point found out about the ancient Egyptian god Kek, which was sometimes depicted with the head of a frog. With 4chan trolls already having embraced Pepe the Frog, once a mostly innocent cartoon character who was deliberately turned into a white nationalist symbol, this quickly led to "Kek" turning into a diety, and by extension, a semi-ironic religion.

In January of 2017, alt-lite (the less explicitly racist version of the alt-right that shares its internet culture but differentiates itself by its response to the "Jewish Question") YouTube personality Sargon of Akkad proposed the idea of "sh*tposters" registering themselves on the UK census as a religion, and the community organized itself officially around the idea of an imaginary Kekistan and its ancient culture.

The community modeled their flag on a Nazi war flag from the 1930s, turning it green and replacing the swastika with their symbol derived from the word Kek.

Kekistan's following enjoy treating their make-believe country as completely serious. They've developed extensive lore about the imaginary history of Kekistan, and have set up websites that treat the country as a sovereign nation. They often mimic the affect of official news reports and government communications when they refer to the country, or the language of religious texts when they refer to its beliefs.

Over the course of 2017, the Kekistan flag has moved off of the internet, and strangely enough, into the real world. People have showed up brandishing it at numerous pro-Trump and far-right rallies. At Saturday's pro-Trump "Mother of All Rallies" in Washington, D.C., the flag made an appearance as well.

As with many things about internet culture, especially the meme and troll-based far right elements, it's hard to tell quite how much of Kekistan's professed beliefs are taken seriously by its adherents. Members of Kekistan often make a point of differentiating themselves from some of the more unsavory parts of the alt-right — they do not explicitly identify as Nazis, though they enjoy playing around with Nazi iconography.

More than any sort of specific belief, the flag has become a signifier of camaraderie between people in real life who can recognize each other, outside of the anonymous message board Kekistan sprouted out of.