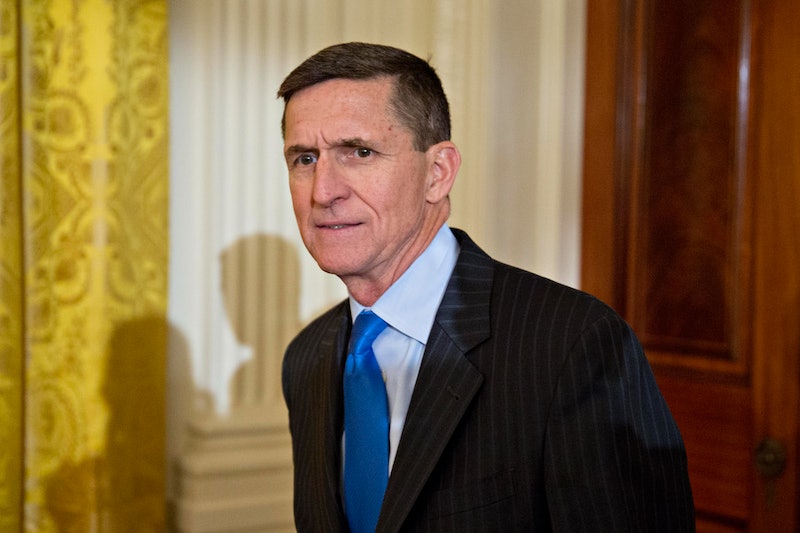 There was big news at the White House Monday night when National Security Adviser Michael Flynn, one of President Donald Trump's most loyal aides, had stepped down from his position. Flynn's resignation came after a Washington Post report last week that he had discussed President Obama's sanctions on Russia with the country's ambassador in December. One concern raised from this news is whether Flynn did something illegal and specifically did he violate the Logan Act. But what is the Logan Act? The law that Flynn may have broken.

The purpose of the Logan Act is to keep people outside of government from undermining the country's interests. Passed in 1797, the law states:

According to the White House, Flynn has not broken any laws. By the Trump administration's account, Flynn resigned due to "eroding trust in this situation," as Press Secretary Sean Spicer stated. He also said the White House counsel Donald McGahn said Flynn's conversations were "not a legal issue but a trust issue."

Let's go back to the text in the Logan Act. If President Obama was imposing sanctions to punish Russia for its role in the U.S. election, Flynn undermining them could be construed to "defeat the measures of the United States." According to the New York Times, the FBI told the Obama Administration back around the time the call happened that there had been no deal made on the phone call, so a prosecution would prove difficult. Also, no person has ever been prosecuted under the Logan Act in its more than 200 years of existence, and there is pretty much no case law on it.

Of course, just because Flynn is unlikely to face criminal charges doesn't fix the problems. By Flynn's own account, he told Vice President Mike Pence and other officials that he had not discussed sanctions when he, in fact, had.

What may be the most troubling part of the whole thing, though, is not the Logan Act, but rather that Trump knew about Flynn's conversations and that he misled people in the White House for weeks, according to officials. Trump's decision not to immediately take action when he learned about Flynn's dishonesty may be even more disconcerting than Flynn's actions.