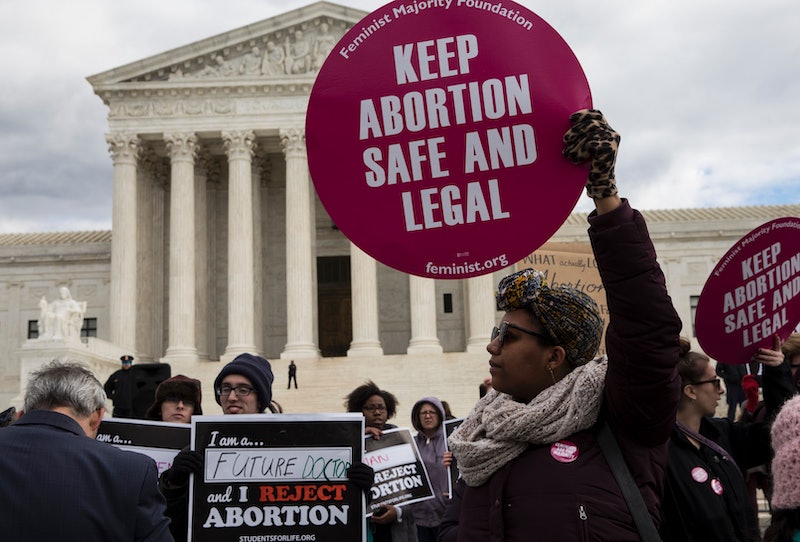 Just days after their Senate counterparts failed to push a health care bill that would severely limit women's reproductive rights, House Republicans are now proposing legislation that would make access to abortion even harder for women across the country. Slated for a vote on Oct. 3, the Pain-Capable Unborn Child Protection Act would ban abortion after 20 weeks, except in cases of rape, incest, or danger to the mother's life.

The bill, which was introduced on Tuesday by House Majority Leader Kevin McCarthy, would make it a crime to perform or attempt to perform an abortion after 20 weeks of pregnancy. Individuals who do so could face a fine and up to a five-year prison sentence. Women who attempt to have the procedure after 20 weeks, however, would not be punished.

According to McCarthy, the bill is intended to "protect those children who science has proven can feel pain, and give them a chance to grow and live full and happy lives," he said in a statement. "We have an obligation to speak and defend for those who can’t speak for themselves."

As the name of the bill suggests, McCarthy, and other anti-choice supporters of the legislation, argue that fetuses can begin to feel pain at 20 weeks; however, the science on this subject is murky. No scientific consensus on the topic has yet been reached, and some researchers have suggested that 20-week-old fetuses have not yet developed the neurological wiring that is necessary to feel pain. One 2005 study even suggests that fetuses can't feel pain until around the third trimester.

This hasn't stopped the GOP from introducing similar legislation in the past. A bill that would ban abortion at 20 weeks passed the House of Representatives in 2013, but failed to gain the support needed to pass the Senate. Ultimately, this could be the same fate of the new iteration of the bill.

While the 2017 Pain-Capable Unborn Child Protection Act has the support of most House Republicans, and has already been endorsed by President Trump, it faces major opposition in the Senate. The bill would require 60 votes to pass; however, Senate Republican only control 52 seats, and an overwhelming majority of Democrats oppose the bill.

Still, the legislation will move forward through the House over the next few days, and it will be brought to the House floor for a vote on Tuesday.

Currently, 20-week abortion bans exist in a number of states across the country, including in Texas, Kansas, North Carolina, and Oklahoma. However, given that some representatives are seeking to expand these restrictions nationwide, these laws can have serious implications for women and their reproductive rights.

According to a 2009 study by the Centers for Disease Control, less than 2 percent of abortions are performed after 20 weeks of gestation nationwide. But laws that prohibit them, according to some legal analysts, undermine key provisions of Roe v. Wade, which state that a fetus isn't "viable," or capable of living on its own outside the womb, until after 24 weeks.

Additionally, late-term abortions that occur after 20 weeks are often rare because they only occur in complex circumstances. Typically, they only occur when severe fetal abnormalities are detected, or when the mother's health is being compromised. According to Planned Parenthood, criminalizing doctors who attempt to perform an abortion in one of these complicated scenarios makes it nearly impossible for women to get the best health care possible, and this can often have serious and life-threatening implications.

While the Pain-Capable Unborn Child Protection Act doesn't seem to have a very good shot at becoming a law, the legislation does serve as a reminder of what House Republicans are prioritizing as we move toward midterm elections, and a reminder of the very real possibility that similar laws that threaten access to safe and affordable women's health care may emerge in the near future.