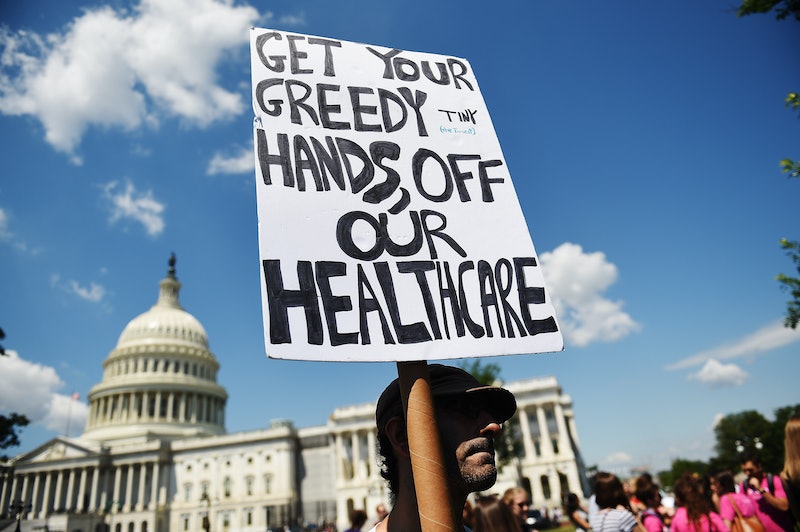 Politicians and activists came together on Tuesday to form the "People's Filibuster" and protest the GOP's health care bill on Capitol Hill. Later in the day, the group had a brief (if temporary) victory following announcements from Senate majority leader Mitch McConnell that the Senate's vote on the bill would be delayed. But that doesn't mean the People's Filibuster rally is finished just yet.

The D.C. gathering of protestors was the first in a week-long series of anti-Trumpcare events organized by progressive advocacy groups including MoveOn.org, Planned Parenthood, and the Center for American Progress. With actions and rally locations set for each afternoon (including a human chain on Wednesday), the end-goal of the People's Filibuster is to put pressure on Republican politicians to vote against the Senate health care bill that has been estimated to leave 22 million Americans without health insurance over the next decade.

From the start, People's Filibuster organizers clearly saw the event as yet another step in a long, difficult fight, regardless of whether or not the Senate vote was delayed. Prior to the event, MoveOn's Washington Director Ben Wikler tweeted that there would be "continuous protests at the Capitol from [Tuesday afternoon] until the bill dies or becomes law."

While the initial reaction to word of the delay (called "preliminary good news" prior to the event) was one of cautious relief, organizers had no delusions that their work was done. In a statement from MoveOn, Wikler emphasized that the fight wasn't over, adding that it was time to "hit the gas" to defend the Affordable Care Act:

The delay of the Senate vote shows that the resistance movement is working, and it’s time to hit the gas. If not for the uprising of millions of Americans, Trumpcare would have been signed into law five months ago. Now, thanks to the voices of grassroots activists fighting for their lives, its end could be within reach. The GOP bill is an unfixable abomination that would take health care from tens of millions of Americans and drive up costs for tens of millions more to benefit the richest Americans. Republican Senators should know that their constituents will double and redouble the pressure until they commit to doing the right thing and bury this immoral and deadly legislation no matter how many times Republican leadership tries to bring it back.

For the protestors and speakers who turned out — including longtime activists, representatives from the organizing groups, people personally touched by Obamacare, and high-profile politicians like Sens. Chuck Schumer, Cory Booker, Kirsten Gillibrand, and Bernie Sanders — the event was an opportunity to reaffirm the spirit of resistance and the momentum around the controversial health care debate.

But, most of all, there was a clear desire to make sure that the Republican senators (who had been fairly cloak and dagger about the whole drafting process) continue to see and humanize the people their bill might harm before they cast their votes.