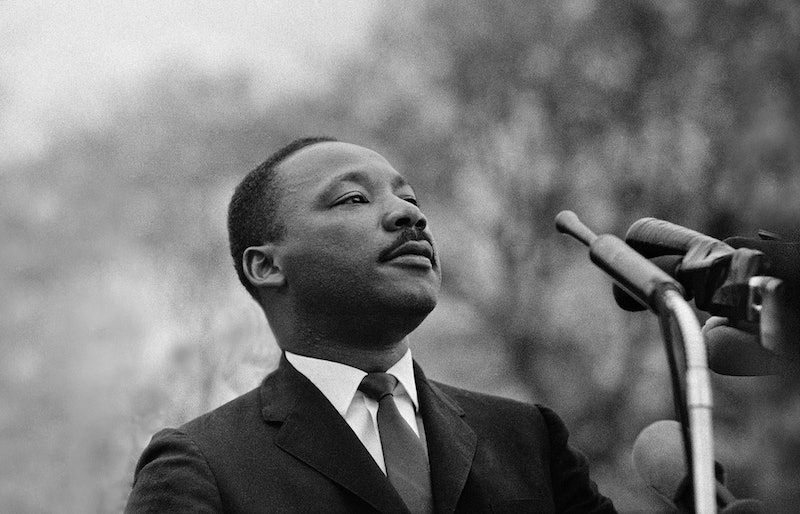 In the late 1960s, King had plans for thousands to descend on Washington, D.C., and meet with government officials to demand jobs, unemployment insurance, and a fair minimum wage for poor adults. That initiative was ultimately cut short by King's assassination. Today, the new Poor People's Campaign aims to "transform the moral narrative" in America, focusing specifically on poverty and systematic racism.

The campaign is being co-chaired by Reverend William Barber II, the former head of the North Carolina chapter of the National Association for the Advancement of Colored People, and Reverend Dr. Liz Theoharis, a theologian and founder of the Poverty Initiative. At a press conference announcing the official launch of the campaign, Barber and Theoharis outlined the vision for the group.

Beginning on Mother’s Day (May 13), the Poor People's campaign will launch "six weeks of direct action and civil disobedience across at least 25 states and the District of Columbia, leading up to a mass mobilization at the U.S. Capitol June 21," according to a press release sent out on Monday. The first week will focus on child poverty and each following week will highlight a different injustice, to include "specific policy goals and a voter education program to advance a moral agenda at the state and federal levels."

During Monday's press conference, Barber called the tax bill — which was recently passed by Senate Republicans in the dead of night — "racist" and "immoral." In the letter, signed by representatives from at least 23 human rights and advocacy organizations, the group says that the tax legislation "would amount to one of the most immoral laws in our nation’s history."

The group added that the bill was especially problematic given the senator's Christian faith. "Your actions are stripping people of the healthcare they need to survive. You are working to pass legislation that is antithetical to the more than 2,000 verses that call on all of us to care for the poor and the sick."

According to its Twitter account, the group was asked to leave the Capitol shortly after it began chanting there.

The group has also aligned itself with other organizations like Fight for $15, which calls for a higher minimum wage — though the Poor People's Campaign says it wants to go even further. "This movement is saying we want more than $15," Barber said during Monday's press conference. "We are talking about guaranteed income. Be ready now. We got to change the narrative. We are doing this for all."

The movement believes that what King called the "evils of racism, economic exploitation, and militarism” remain present in American society — all of which the modern Poor People's Campaign aim to combat.

The Poor People's Campaign is non-partisan, with no elected officials or candidates allowed to serve on the group's State Organizing Committee. It does, however, include a host of ministers and other religious leaders, and says on its website it hopes to "shift the distorted moral narrative often promoted by religious extremists in the nation," moving that narrative away from "personal issues" like abortion, sexuality, and prayer in school and toward "systemic injustices" like how society treats the poor, women, children, immigrants, and the sick.

The group wants everyone to work toward "equality and representation under the law; and the desire for peace, love and harmony within and among nations."