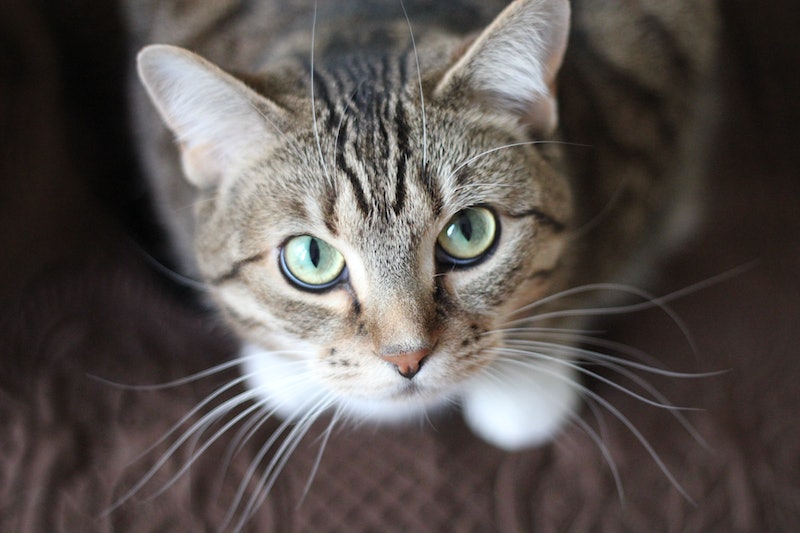 The Women’s March on Washington is set to take place on Jan. 21, and while it’s estimated that thousands will be hitting the streets of D.C., don’t be surprised if there are quite a few pops of defiant pink in the crowd courtesy of The Pussyhat Project. The empowering knitting project, which launched the weekend of Thanksgiving, hooks up marchers with handmade wooly cat-eared caps. These symbolic chapeaus are intended to make a strong visual statement at the protest (as well as provide warmth to the wearer!), and give those unable to attend a crafty way to get involved. (Bustle has reached out to the Pussyhat Project for comment.)

The creative venture was conceived by two California-based friends, screenwriter Krista Suh and architect Jayna Zweiman, who have long shared a love of knitting. Crushed by the results of the 2016 election (Suh campaigned for Democratic nominee Hillary Clinton in Ohio), and seeking out ways to productively get involved, it didn't take long for the creative duo to channel their frustrations into a feminist movement.

With the help of their knitting teacher and local yarn shop owner Kat Coyle, the design for the "pussy power hat" was born. "Pink, cat ears, and made of materials anyone in the U.S. could get, with a super simple pattern," are what defined the hat, co-creator Krista Suh told Hello Giggles.

Setting up a website and spreading the word with a bit of social media promotion was all it took to get women from across the country (and now the world) involved. Suh envisions an instant connection forming between hat-wearers of all walks of life on the day of the march — and if all goes well, a sea of pink flooding the Washington Mall, too. “Wearing pink together is a powerful statement that we are unapologetically feminine and we unapologetically stand for women’s rights.” states the Pussyhat Project manifesto.

The name of the project is both a barbed reference to Donald Trump's shocking "grab them by the p*ssy" comment, as well as a way to shine a healing light on the word. "We love the clever wordplay of 'pussyhat' and 'pussycat,' but yes, 'p*ssy' is also a derogatory term for female genitalia," the manifesto reads. "We chose this loaded word for our project because we want to reclaim the term as a means of empowerment."

The co-founders encourage everyone to participate in hat making, no matter their skill level. Whether you knit, crochet, or sew, there's a pattern available on the Pussyhat project website that will suit your needs. Once the hat is complete, upload the details of your creation to the official Pussyhat registry. If you do not plan on marching, hats are being collected by mail to be distribute to marchers at drop points in D.C. which are yet to be determined. With over 150,000 people planning to attend the march based on it's Facebook page, there is a lot of demand for hats.