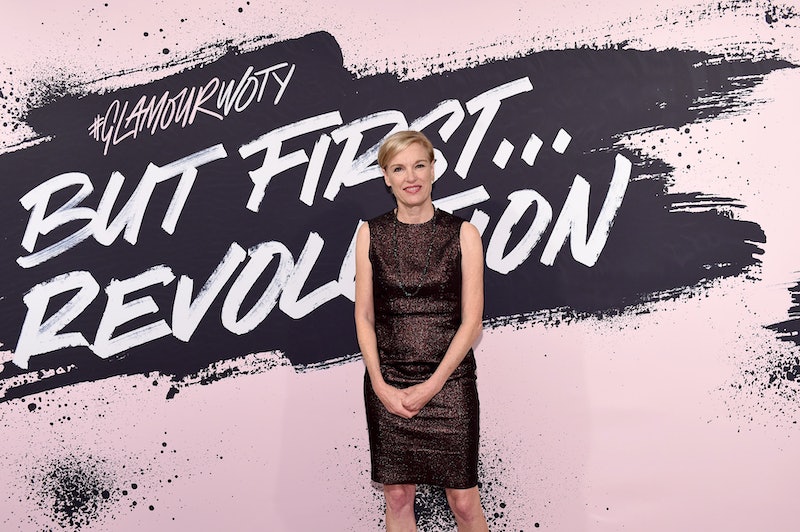 While President Trump addresses the nation Tuesday night from Capitol Hill, women activists will hold the State of OUR Union. Described as "a new vision for women coming together to change the balance of power," the alternative event is scheduled to begin streaming an hour before the White House's own SOTU stream goes live. Big names including Planned Parenthood president Cecile Richards and Tarana Burke, the founder of the #MeToo movement, will be in attendance, as well as at least two female members of Congress who are boycotting Trump's speech.

Trump's first official State of the Union address generated backlash before it even began. A dozen Democrats refused to attend the speech, which is intended to allow the president to address Congress in its entirety. Four responses were scheduled to immediately follow the SOTU, and celebs organized the People's State Of The Union to celebrate the efforts of the resistance. Adding to that swell of anti-Trump demonstrations taking place Tuesday night, women activists established the State of OUR Union.

Free tickets were available online to attend the event in person in Washington, D.C., but the gathering will also be streamed live on TheStateOfOurUnion.org at 8 p.m. ET. On top of speeches from Reps. Pramila Jayapal (D-WA) and Barbara Lee (D-CA), a performance by musician Ledisi will liven up the room. "During the State of Our Union," the event's Facebook page reads, "we will understand the state of our nation through the eyes and experiences of women, and chart a path together, towards real solutions in the culture, policies and politics that shape our lives."

The event was put together by organizations including Color Of Change, the National Domestic Workers Alliance, Girls For Gender Equity, and Planned Parenthood. A "statement on unity" on the website explains that the alternative SOTU will show that "we, the women of the United States, are united." It reads: "We have formed a union bound by courage, by strength and by our firm knowledge that we have the power to change the State of the Union — the union of these United States."

The women behind the State of OUR Union pledge to vote for candidates who listen to and represent women, fight abuses of power, love one another, and unite against hate, misogyny, and violence in all of its forms. The website also encourages others to take the same pledge by signing an online petition and writing what you will do "to better the state of our union in 2018."

"Each and every person has a role to play in creating a future where everyone in the United States can thrive," the site says. "We commit to staying powerfully connected to move us toward freedom and justice, where we can all live and work with safety and dignity. Respecting our differences, we come together on this common ground."

The event is similar to the People's State of the Union that took place in New York City Monday night, when celebs including Mark Ruffalo, Rosie Perez, and Whoopi Goldberg gathered to raise awareness about how the resistance is fighting back. While both SOTU alternatives focused on activists challenging the Trump administration, the State of OUR Union was planned by and for women.

"The Trump Administration and many of our elected officials are trying to divide us — by race, by gender, by religion, by class, and by immigration status," the State of OUR Union website reads. "They are also trying to divide us from our sisters around the world, who are also harmed by their policies." It adds, "We, as women, see and experience the truth every single day and this is the state of our union."