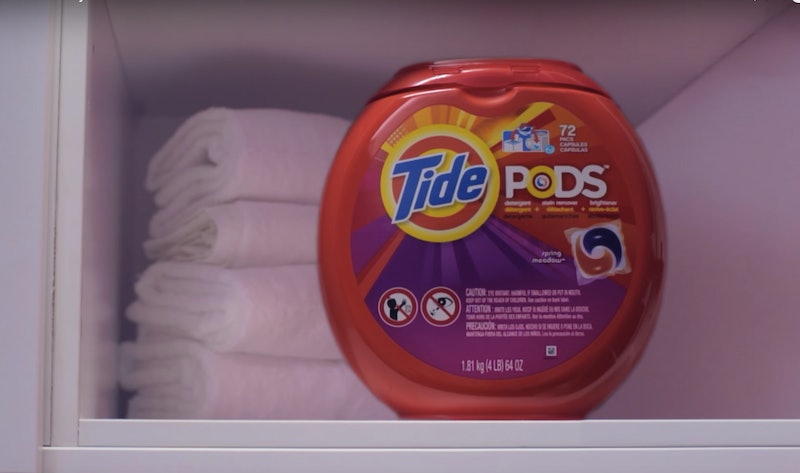 Teens, fans of fun activities like snorting chocolate, rubbing Burt's Bees in their eyes, and attacking me on Twitter for making jokes about Taylor Swift, have reportedly hopped onto a new bizarre and rather dangerous trend: eating laundry detergent for the "Tide Pod challenge." This, unsurprisingly, is not a super great idea, and consumer product officials are not happy.

As reported by CBS News, teens and Internet celebrities have been putting up viral videos of themselves sticking the toxic pods in their mouths, popping them, and pretending they're food. This sounds really stupid for a lot of reasons, not the least of which is that laundry detergent contains chemicals like ethanol, hydrogen peroxide and polymers, and it is incredibly unsafe to eat. Swallowing detergent could cause diarrhea and vomiting, according to USA Today, and it's even possible detergent that made its way into the lungs could cause serious breathing problems. You can also suffer burns to your skin, eyes, and esophagus and respiratory tract, all of which can lead to even more health problems later on.

Procter & Gamble, which makes the Tide Pods, released the following statement regarding the fad:

The Tide Pod challenge did, in fact, start out as a joke. Last year, detergent pods became a bit of a meme thanks to their colorful, candy-like packaging, with people posting photos of Tide Pods arranged on dinner plates on social media. That was funny(ish), but in March, College Humor put up a video titled, "Don't Eat the Laundry Pods," which joked about eating the pods:

Though the video ends with the pod-eater getting a carted away by an ambulance, which should be sign enough that you should stay away from the pods, like every other incredibly dumb thing on the Internet it caught on.

The Consumer Product Safety Commission has long been concerned about laundry pods and other colorful detergent pods, warning that toddlers, young children, and seniors with dementia may mistake them for edible food thanks to the packaging. Between the years of 2013 and 2014, over 62,000 children under the age of six were exposed to detergent pods, prompting the commission to recommend companies tone down the packet to make them less attractive.

Now, the officials say it's teens who need to be aware of the dangers of eating the pods, and not just parents with small children. "This is what started out as a joke on the internet and now it's just gone too far," Ann Marie Buerkle, acting chairman of the Consumer Product Safety Commission, told CBS News.

Of course, as with any trend, the Tide Pod situation has spawned an even weirder response from the Internet. Someone on Tumblr published a recipe for edible Tide Pods, so folks who really must put the pods in their mouths could do so without, you know, potentially dying. Sadly, that post has since been deleted, but it still exists on Twitter:

Then, a Redditor dreamed up a sushi version of a Tide Pod, which Tide Pod enthusiasts would be pleased to know has more or less the same "squish" as real Tide Pods, which apparently the teens are real jazzed about.

Each day I am more grateful I did not come of age in the viral era. High school fads were stupid enough without having to impress the world and my classmates, plus we had fun YouTube videos, like Salad Fingers. Ah, Salad Fingers.