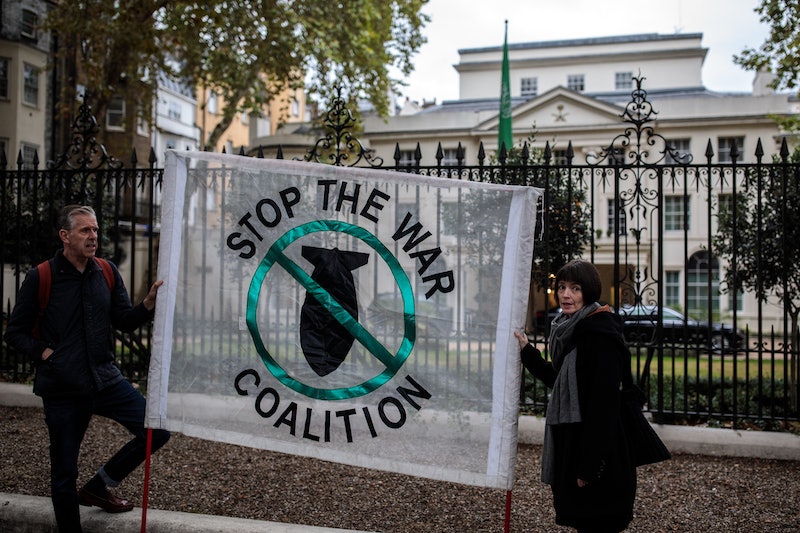 Amid the coronavirus pandemic, you may have come across social media posts about the crisis unfolding in Yemen. Described as the "largest humanitarian crisis in the world" by UNICEF, the ongoing civil war has been raging since 2015 following the 2011-12 revolution against former President Ali Abdullah Saleh. With seemingly no end in sight, citizens continue to face major displacement, famine, lack of sanitation and basic medical equipment. Though you may not realise it, the UK has contributed to the Yemen crisis.

As the world's second largest arms exporter, the UK "has licensed the sale of £6.2bn worth" of weapons, jets, and missiles to the Saudi-led coalition who have been attacking Yemen since 2015, per the Independent. This figure also highlights sales to other middle-eastern nations involved in the coalition, including the United Arab Emirates, Egypt, Bahrain, Kuwait, and Quatar.

As research by think tank the Stockholm International Peace Research Institute shows, Britain is one of three major countries exporting arms to Saudi Arabia, which include the United States and France, BBC News reports.

How Is The UK Involved?

Supplying weapons and other defence technology is the UK's main export, but the country also "provides the personnel and expertise required to keep the war going," the Guardian writes. Deployed by the British government, RAF troops work as engineers to train pilots of the coalition.

Around 6,300 British contractors "are stationed at forward operating bases in Saudi Arabia," where they also "supervise Saudi soldiers to load bombs to planes and set their fuses for their intended targets."

Additional RAF "liaison officers" work at the command-and-control centre, "from where targets in Yemen are selected." However, the UK government says that while they may arm the coalition, they don't pick the targets in Yemen.

Who Provides These Weapons?

Multinational defence, security and aerospace company BAE Systems was subcontracted by the government to provide arms, which have 50 sites across the UK. As one of the biggest defence manufacturers in the world, BAE produce "a wide range of weaponry systems, including Eurofighter-Typhoon jets and Trident nuclear missile submarines," per the Guardian.

Per the Guardian, BAE Systems has been a principal supplier of Eurofighter Typhoon and Tornado jets to the Royal Saudi Air Force. This branch of Saudi Arabia's military "has conducted a string of deadly strikes on Yemen, as [has] the UK arm of Raytheon, which manufactures Paveway IV guided missiles in the conflict."

"The Saudi bosses absolutely depend on BAE Systems," John Deverell, a former MoD mandarin and defence attached to Saudi Arabia and Yemen, told the Guardian. "They couldn't do it without us."

As the Guardian writes, under British law "it is illegal to license arms exports if they might be used deliberately or recklessly against civilians — or in legal terms, to violate international humanitarian law." In June 2019, the Court of Appeal in London ruled that the UK's sales of arms to Saudi Arabia were unlawful, following a campaign by the non-profit organisation Campaign Against Arms Trade (CAAT)."

A 2019 UN report also found the "legality of arms transfers by France, the United Kingdom, the United States and other States" questionable.

"No matter what atrocities it has inflicted, the Saudi regime has been able to count on the uncritical political and military support of the UK," CAAT spokesman Andrew Smith told BBC News. "The bombing has created the worst humanitarian crisis in the world."

For more information on charities, fundraisers, and resources on the Yemen crisis, you can visit this site put together by activist @wipbee on Instagram.

More like this
Boris Johnson’s Leadership Is In Question – Again
By Bustle UK
Windrush Victims Are Still Waiting For Compensation
By Sam Ramsden
What Is Happening With Sheku Bayoh’s Case?
By Sophie McEvoy
Mollie King & Stuart Broad Have The Most Relatable Wedding Plans
By Sophie McEvoy
Get The Very Best Of Bustle/UK