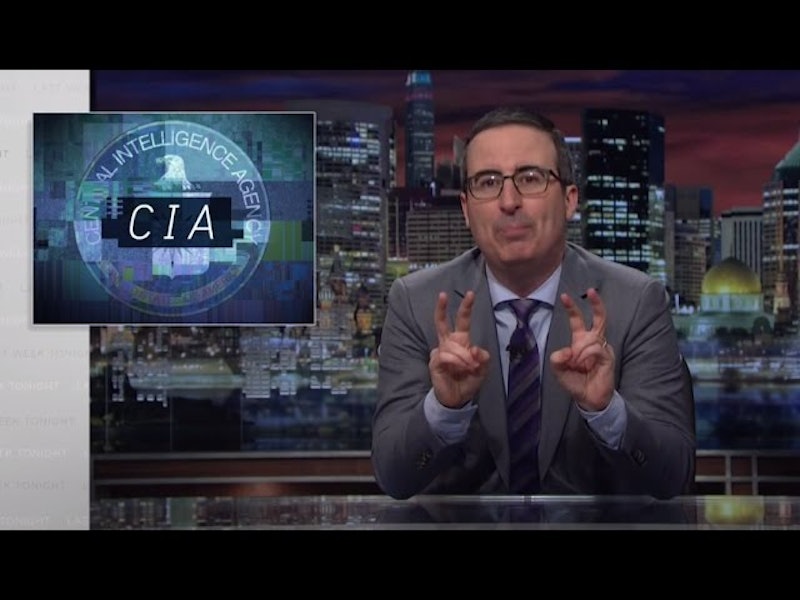 Weeping Angel is the code name for a CIA surveillance program that was revealed in the nearly 9,000 pages of confidential CIA documents about surveillance that were uploaded to Wikileaks on March 7. Coincidentally (or not) "Weeping Angels" are also villains on the television show, Doctor Who. According to the technology website Recode, Weeping Angel is a CIA program that supposedly targets "smart TVs by placing the internet-connected appliance in a 'Fake Off' mode that makes the television appear to be turned off while it covertly sends audio recordings from the room to the CIA."

According to Oliver, following the uploading of the CIA documents to Wikileaks, the media was seemingly abuzz with reports about CIA surveillance programs and capabilities, particularly focusing on the "Weeping Angel" program and warning audiences that their smart TVs could be "spying" on them.

However, says Oliver, the revelations in the leaked CIA documents were seemingly "less alarming than early [media] coverage suggested." Indeed, Oliver asserted that the Weeping Angel program's capabilities were far more limited than what was being portrayed in the media, indicating the program could only be used on TVs from 2012 and 2013 and that, in order to record information, the CIA has to install TV malware by USB, not remotely. Thus, Oliver indicated that in order to have surveillance malware installed on one's smart TV, a CIA operative would have to actually physically place a USB into the television set of someone whom they desired to surveil. Moreover, Oliver revealed that there are easy ways to avoid this surveillance — one can simply remove the USB or unplug the television.

A March 7 article in Wired confirmed and expounded upon Oliver's assertions. The article indicated that the Weeping Angel "exploit almost certainly impacts relatively few people," due to the limited televisions on which it can be effective, and that "the CIA probably created this hack to target specific individuals... So unless you’re a known operative, it’s unlikely the government compromised your TV." Thus, it is seemingly highly unlikely that the Weeping Angel program affects a significant amount of people.

Of course, Oliver did acknowledge that the fact that the CIA documents were even acquired by Wikileaks at all is certainly significant, as it indicates that a large security leak does exist. However, Oliver seemingly wanted to make sure audiences were able to fully contextualize the nature of the newly-revealed leaks, particularly the Weeping Angel program, and not necessarily buy into the initial media hype suggesting that everyday Americans could be easy targets of government surveillance via their smart TVs.

More like this
'Waterloo Road' Is Back, With More Than A Few Familiar Faces
By Sam Ramsden and Vivian Iroanya
Angel Number 808 Is A Symbol Of Your Potential
By Nina Kahn
'Bridgerton' & 'Succession' Casts Join Forces For A New Dickens Adaptation
By Darshita Goyal
Hailey Bieber Has A "Painful" Ovarian Cyst "The Size Of An Apple"
By Radhika Menon
Get Even More From Bustle — Sign Up For The Newsletter