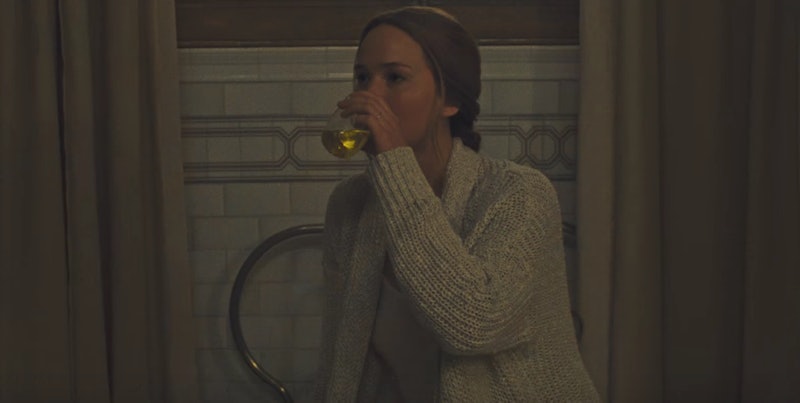 There's something not quite right with Mother, Jennifer Lawrence's title character in the new psychological thriller Mother!. She's anxious, prone to panic attack-like states that cause her to hallucinate — or perhaps see the creepy details behind the walls of her home. To treat her episodes, she fixes herself a glass of a mysterious yellow drink, which seems to quiet the attacks, at least for a little while. Mother's self-medication is never explicitly revealed, and the audience never finds out what the yellow powder Lawrence drinks in Mother! is. However, there are some guesses as to what that substance might be, and why it's used so predominantly in the new film.

Small spoilers ahead! In Mother!, Lawrence's character creates her special yellow drink by mixing some unmarked yellow powder into a glass of water. Immediately, her hallucinations cease and the insufferable ringing in her ears quiets. It's her magic potion, and it seems to work, for the most part. Later in the film, when Mother feels happier and more relaxed, she even flushes her entire vial of yellow powder down the drain. Of course, that's when things in the house start getting weird, or weirder than they were already. How the yellow powder ties into the weirdness of Mother's circumstances is unclear. Is the lack of yellow powder causing Mother to hallucinate? Was the yellow powder some sort of drug her controlling husband gave her to keep her docile or work her up into insanity? Was it just a tea to keep her calm? Let's explore some options.

Mother keeps the powder in an unmarked vial, suggesting that whatever the yellow powder is, it isn't doctor-prescribed anti-anxiety medication. That said, it could be some kind of natural supplement. (This would also fit with the idea that Mother is really Mother Nature.) One option of what it might be: Kava, a tea with known psychoactive effects. Kava has been known to reduce anxiety, and, in concentrated quantities, essentially get you high. The Kava root is frequently ground down to a powder and added to water, not unlike Mother's yellow powder. Granted, Kava is known for its brown color, but, less concentrated Kava tea can have a yellow tint.

It seems likely that the yellow powder is meant to be a Kava-like drug or root. Something natural, yet potent, with unexpected and unexplained side-effects that could cause Mother to become paranoid throughout the film. However, it's also likely that the yellow powder isn't so much an actual substance as a symbol of something else, which brings us to option number two.

Mother! has already garnered a lot of comparisons to "The Yellow Wallpaper," Charlotte Perkins Gilman's classic 1892 short story about postpartum depression and a woman gone mad thanks to her oppressive husband and a culture that doesn't take her seriously. It's a similar narrative to that of Mother!, touching on themes of marriage, gender dynamics, motherhood, and mental health. Like Mother, the protagonist in "The Yellow Wallpaper" has a deep connection to her house (or room, as it were), feeling as if it was alive. The yellow powder in Mother! could just be a nod to the story, representing a connection to other women suffering from mental illness, controlling husbands, and stifling gender norms.

The yellow powder might mean all of these things or none of them. It's kept a mystery for a reason, and audiences walking out of Mother! will have to decide for themselves what the yellow powder is. Drug or symbolic insanity? You decide.