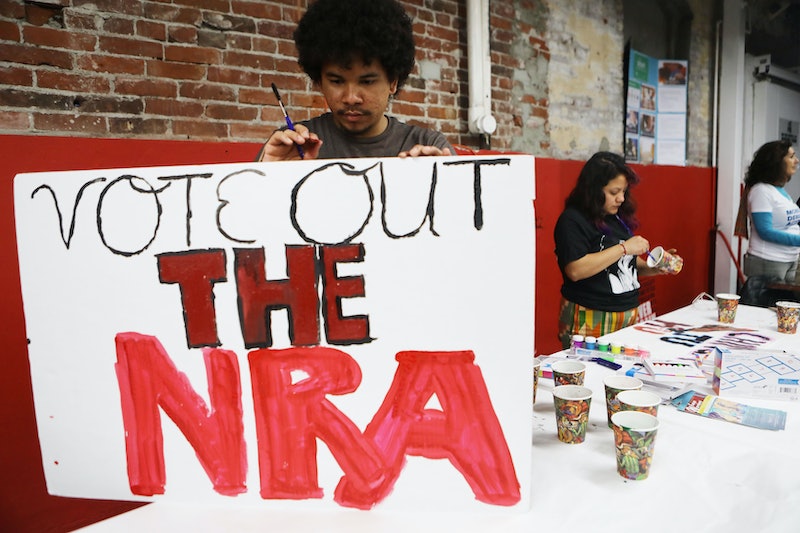 Young people across the country are marching for their lives on Saturday, but that is not the only action that the Never Again movement has up its sleeve to convince D.C. and state governments to act on gun control. Voting was a key message in the remarks given by student activists at the march, and the March for Our Lives organizers already have a second action ready, Vote for Our Lives, which will work to register young people to vote.

The idea is that voting will put the ultimate pressure on elected officials who are otherwise hesitant to pass gun control legislation. Many of the Never Again MSD organizers like Emma González, David Hogg, and Cameron Kasky have been vocal in the media and on social media about the need to vote since the get-go.

Gonzalez ended her first, viral speech in February with that message. "They say no laws could have prevented the hundreds of senseless tragedies that have occurred," Gonzalez said at a gun control rally days after 17 people at Marjory Stoneman Douglas High School were killed. "We call BS. That us kids don't know what we're talking about, that we're too young to understand how the government works. We call BS. If you agree, register to vote."

They've kept it up. Kasky wrote several tweets on the topic early March, "Hi my name is REGISTER TO VOTE," he posted. It was retweeted almost 9,000 times. A day earlier, he wrote in more detail. "It’s very inspiring to think about the upcoming generation of voters," Kasky posted. "All of us are nearing the voting age and it’s important to encourage each other to register. The recent tragedies and the response from the government has made people realize their vote counts."

The March for Our Lives website already has a landing page where you can register yourself. You put in your email address and zip code, and the online guide, run by Rock the Vote, helps you find the easiest way to register. Some states let you do so online; others make you mail something in or go in person. It will take just two minutes on average, the website points out.

In addition to that, the March for Our Lives lets you request a DIY voter registration tool-kit. If you promise that your registration won't endorse one party or candidate, they will send you a guide that will help you register eligible voters in your community. Increasing the youth vote could be key to influencing politicians to pass gun control, and they want to empower everyone to hold their very own drive.

The call from survivors to vote continued on stage in D.C. on Saturday. Kasky addressed voting in his remarks at the march. He noted that "the people demand" gun control laws like universal background checks and an assault weapons ban. "Stand for us or beware that the voters are coming," Kasky warned politicians. "The march is not the climax. It is the beginning."

He was followed by Delaney Tarr who promised, "We will vote." She said that this generation is "here for real change." She added, "When they give us that inch, that bump stock ban, we will take a mile.”

Historically opponents of gun control have been more vocal than those in favor. Vote for Our Lives could change that as young people turn 18 and start voting. The NRA has an estimated at least 5 million members. Young people between the age of 15 and 19 — all of whom will be able to vote in 2020 — number 21 million.

If Saturday's march is a preview of things to come, the future of gun control could very likely change.