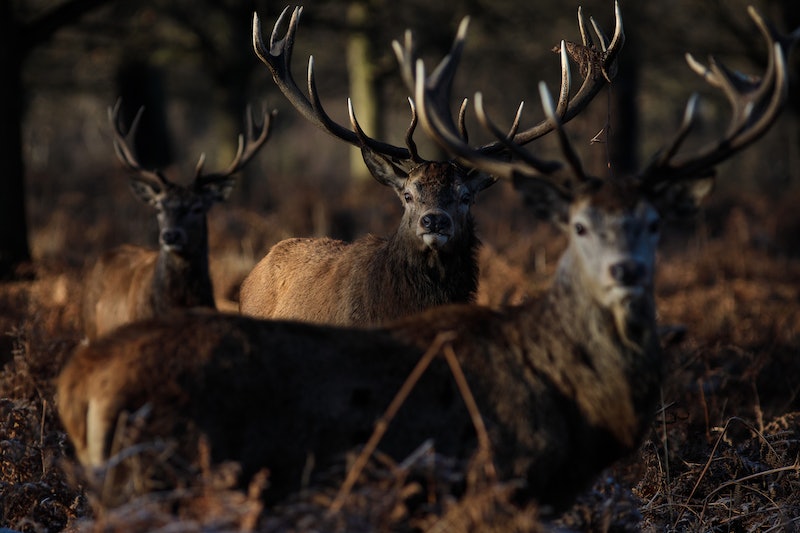 I know it sounds like the premise of a low-budget horror film, but unfortunately, this is a description of a real life threat in the news today. Apparently, species of deer around the country are contracting some sort of condition being called "Zombie Deer Disease" by various media outlets, which causes them to behave sort of like zombies — and now the Center for Disease Control and Prevention is warning that humans could technically be susceptible to the disease too. So, it's worth asking: What is zombie deer disease?

If you've seen Bambi, you probably love deer as much as I do — and this news is probably super disconcerting. What business do deer and zombies have even sharing a news headline? According to the Center for Disease Control and Prevention, as of January 2018, at least 22 states and two Canadian provinces have confirmed reports of Chronic Wasting Disease, which is being colloquially referred to as the Zombie Deer Disease. The illness is classified as a Prion Disease, meaning it falls under a rare family of progressive neurodegenerative disorders (aka, a disorder that causes damage or death to the brain) that affect both humans and animals. In the case of Zombie Deer Disease, white-tailed deer, black-tailed deer, silka deer, elk, mule deer and moose are being affected so far, but the CDC isn't ruling out the possibility of it spreading to humans — because other prion diseases have affected humans before.

Prion diseases are characterized by long incubation periods, changes associated with neuronal loss, and a defunct inflammatory response. Prions are contagious, abnormal proteins that cause other proteins in the brain to become abnormal as well. Quite literally, it reduces the brain structure to that of a sponge.

Once the disease is active, (which typically takes a year from the contamination period) the victim exhibits behaviors not dissimilar to that exhibited by zombies in horror movies: severe weight loss, strange posture, a lack of energy, unsteady balance, a loss of coordination, extreme thirst, excessive urination, drooling, low-hanging ears, and aggressive behavior.

Even worse, these obvious symptoms only become apparent during the terminal stage of the disease. In the year prior to the symptoms emerging, these animals can shed infectious protein prions, contaminating any other deer that come into contact directly with their saliva, blood, feces, urine — or indirectly, with an infected environment.

As humans, the latter is a condition that we have to worry about. Because, while the CDC has not yet found any evidence to suggest that Zombie Deer Disease can spread to humans, the infected prions are able to adapt easily — and in the past, there have been cases of other strands of infected prions that have successfully transferred between different species.

For instance, in the early 2000s, Mad Cow Disease came to the U.S., but many scientists believe that it was originally introduced to the larger ecosystem by sheep infected with Scrapie (a transmissible spongiform encephalopathies), which was transferred to cattle through feed that had infected sheep carcass, which then transferred the disease to people through infected beef. So if the history of similar diseases were to be considered a rule of thumb, it would be wise to abstain from consuming deer meat. For hunters and harvesters of deer, the Canadian government has released a warning against consumption, and also includes imperative safety procedures to follow regarding the disposal and removal of deer carcasses.

Though surely this disease is shocking, gruesome and upsetting to read about, there are a variety of species that fall victim to zombie-like diseases, so it's not that crazy in the animal kingdom. On a smaller scale, many different species of bugs are susceptible to parasites that literally take over their body, use it to their advantage and then ultimately cause death to their host. For instance, Ophiocordyceps unilateralis is a fungus that prays on certain types of ants. Once the ant is infected with a spore, the fungus will gradually take over the ant, until all that's left is its exoskeleton filled with maturing spores. Aka, if you see a dead ant that has a mushroom growing out of it, it fell victim to this disease. Pill bugs, cockroaches, spiders, and crabs are also common victims of zombie diseases.

But before you cut ties with your affection for Bambi or start squashing bugs, remember that the CDC does not currently find these diseases active threats to humans. If you want to take precautions, skip the venison medallions at dinner, and go for something plant-based. Help to secure the health of the planet, and avoid becoming a character in a horror film that's actually your real life.

More like this
This Psychological Effect Might Be Keeping You From Hitting Your Goals
By Lexi Inks
I Tried The Ice Barrel's Cold Therapy Tool & Now I Like Ice Baths
By Allie Flinn
Got Brain Fog? Here Are The Best Supplements For Memory & Cognition
By Carolyn Steber
Here's Why Your Knee Hurts When You Bend It
By Carolyn Steber
Get Even More From Bustle — Sign Up For The Newsletter