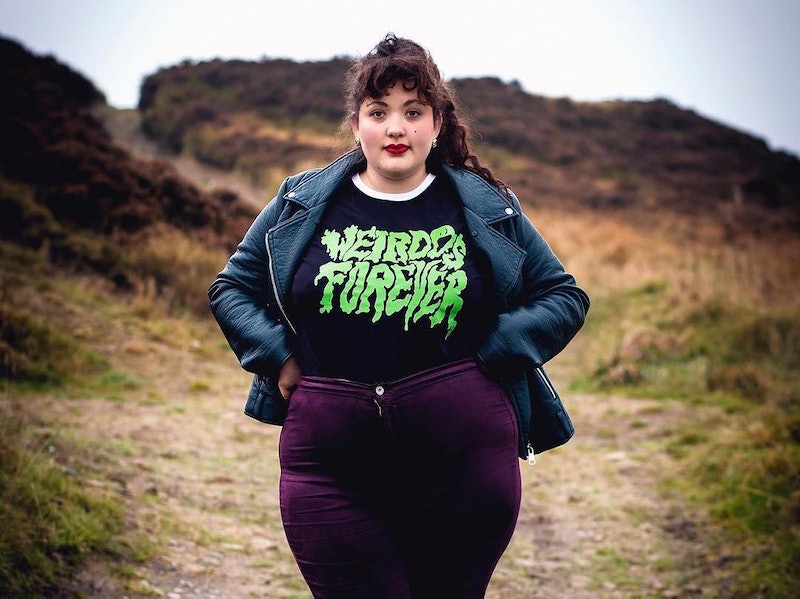 “Excuse me, but where did you find that outfit?” The question was one I’d admittedly been asked on social media many times before, whenever I’d shared a new fashion post for friends, followers, and fellow bloggers. In real life, however, it felt entirely out-of-place. I looked down at my body for a few seconds, trying to remember where each piece decorating it had come from. Check trousers in a racing-green hue rested atop a pink velvet bodysuit in a V-neck cut. A silky gold trench completed the look. This was one of my first nights out since moving to northern England in late 2016, and one of the first times I realised that being plus size in the U.K. was perhaps going to be different than being plus size in the States, where I grew up.

As I started running through a list of the plus-size retailers I’d hit up in order to acquire this particular ensemble, the young woman in front of me — I imagined she was in her mid-to-late 20s like myself — took out her iPhone. “You’ve inspired me,” she said quickly. “We have similar body types, but I never thought I could pull off something so eye-catching. Maybe I can.”

Another woman or femme may come up to me out of the blue and say how wonderful it is to see a plus-size woman dressing in ways we’ve been told for so long are off limits to us.

Although I never saw her after that one smiley exchange, I’ve had many similar interactions in my year and a half on this side of the pond. Half the time, it’s me who’ll see a striking fat babe at a coffee shop, in a nightclub, or on Northern Rail (there are so many striking fat babes!). Her look will radiate confidence, quirk, or intrigue, and I’ll just have to find a way to start a conversation. Despite being an introvert by nature, this is something I’ll usually feel comfortable doing in the U.K. — in America, I’d usually be held back.

The other half of the time, it’s the other way around. I’ll be approached at a Tesco, in a pub, or on the tube. A teen might tell me I look “cool.” A cutie might ask me out on a date, romantic or otherwise, based purely on initial attraction. Best of all, another woman or femme may come up to me out of the blue and say how wonderful it is to see a plus-size woman dressing in ways we’ve been told for so long are off limits to us.

It’s true that I live in an especially progressive bubble of England: Hebden Bridge, otherwise known as the lesbian and hippie capital of the country. With a strong LGBTQ scene has come a strong counterculture, or otherwise “alt” scene, meaning differences are typically applauded here rather than condemned. It’s a rural area surrounding by green hills, livestock, and moorlands. Even so, I feel like I can visit the local Co-Op in a size 26 purple sequin dress, Hawaiian print co-ord set, or rainbow bootie shorts, and escape more or less judgment-free.

'Fat slag' commentary also seems to follow my fellow plus-size friends and me whenever we dare to wear anything that might be considered revealing.

In truth, I’ve gotten similar vibes off Manchester, only a 30-minute train ride away, and other Northern hubs, like York and Leeds. I’ve gotten similar vibes when traveling around Scotland, Wales, and the Midlands. Even in London, a city that radiates ambition and trends (much like NYC where I lived before coming over), I’ve never felt like an instant target, like a walking joke meant to be pointed at and belittled.

This isn’t to say that fatphobia is not a part of British culture. It certainly is, and the harassment that accompanies that is ever-present. It’ll slap me in the wobbly gut when I hear someone shout “fat c*nt” from their car window as they drive past my 55-inch bottom. It makes my stomach turn when a doctor has to take my blood pressure three times, just to be sure I’m actually all right and that the machine isn’t glitching out. When I had my daughter a year and a half ago, I detested that I was considered a “high risk” patient on the basis of BMI alone. “Fat slag” commentary also seems to follow my fellow plus-size friends and me whenever we dare to wear anything that might be considered revealing.

The difference between living here and living in the U.S. (at least in the areas of the U.S that I experienced, which included most states on the East Coast, and much of the South and Midwest) is that for every cringing, uncomfortable exchange in the U.K., there has almost always been a redeemable one around the corner.

Unless I was specifically surrounded by feminist, fat-positive people in America, no one ever stopped me in my tracks to ask about something I was wearing. Few people showed romantic interest in me, unless they were being dared to. I cannot think of a single stranger on the street telling me that my sartorial boldness had inspired them, or casually striking up a conversation about the injustices of a fashion industry that has thrived regardless of excluding so many people from it on the basis of body size alone.

As a visibly fat person, however, it’s rare to find spaces where I can let my guard down.

It’s not just about attention, though. Days, weeks, and months can fly by without an empowering exchange. I don’t believe that being validated by others should be essential to feeling worthy of our own personhood, and I’d like to think that I wouldn’t waver in my self-respect even if no one ever complimented me again.

As a visibly fat person, however, it’s rare to find spaces where I can let my guard down. Where I can just exist, without contemplating what fat jokes or other forms of abuse lie just around the corner. Where I can eat either a salad or a cheeseburger in public, sans wondering if a waiter or fellow diner is going to make some crude remark about my diet.

In Hebden Bridge, however, I let my guard down. I eat burritos or chips in curry sauce in the town centre without shame. I go to the shops in my loudest, most beloved outfits, and my anxiety remains absent. I simply let myself be, in the way that I can let myself be through so much of the country. In the way that I never fully realised was missing from my life before.

More like this
Gen Z Are Twice As Likely To Identify As Queer, According To New Data
By Sam Ramsden
Rita Ora Joined The Cut-Out Trend With These Bejewelled Butterfly Trousers
By El Hunt
Kate Middleton Wore The Ultimate '90s Power Suit
By Sam Ramsden
The Internet Can’t Get Enough Of Viktor & Rolf's Upside Down Dresses
By El Hunt
Get The Very Best Of Bustle/UK
Sign up for Bustle UK's twice-weekly newsletter, featuring the latest must-watch TV, moving personal stories, and expert advice on the hottest viral buys.