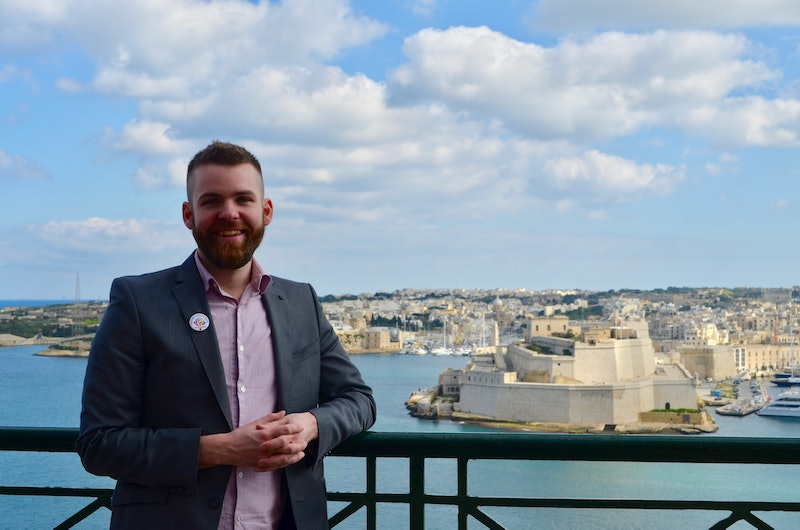 Of course, it wasn't altogether shocking when I read that the Trump administration had rescinded the policy protecting transgender students. But when I woke up to the news Thursday, the backward step was all the more frustrating because I was in Malta for a conference on mainstreaming LGBTQ rights in the European Union. And, you know, it would have been nice to focus on that instead of Trump's regressive policy agenda.

At the conference center, the Maltese Minister for Social Dialogue, Consumer Affairs, and Civil Liberties Helena Dalli spoke about how governments can shape public opinion on LGBTQ issues — not follow it. Meanwhile I read a New York Times article on my phone about Trump moving backward on trans rights, arguably against public opinion. Did Betsy DeVos really push to keep the policy? "Go Betsy!" I almost tweeted. Who would have thought I'd be a huge DeVos fan all of a sudden? Ridiculous, I know. But either way, that shouldn't be how I spent the morning.

I should have been focused on the successes and challenges in implementing the "List of Actions to Advance LGBTI Equality" — the current framework to secure LGBTQ rights in Europe — which was the focus of the conference. The policy paper was published in 2015, and so it was time to see what progress has been made and bring together civil society and ministers of education, healthcare, and public safety to plan next steps.

Instead, I was focused on what was happening back at home in the United States.

In another time, the American government's policy on LGBTQ rights, particularly trans rights, would have been more progressive than nearly any country in Europe. While the Obama administration made it easier for transgender citizens to change their documents, like passports, many European nations still force their trans citizens be sterilized before they can register the gender change with the government.

Forced sterilization. And that's in more than 20 European nations. It sure makes the United States look great in comparison — something I've been proud of as an American living in Europe. We should be and have been an example for other countries on trans issues, using the full resources of our State Department to influence governments around the world to move on this issue. That's something that happened under the Obama administration (and began under the leadership of Hillary Clinton).

But maybe we won't be an example for long. Who's to say that won't be the next rollback under Trump? He has kept on the main LGBTQ advocate at the State Department, and yet there's lingering fear that trans-focused programming could end after the Trump transition team made inquiries about who was working on gender equality. In essence the country's leadership around the world on these issues is a big question mark. And that's not helping anybody.

All of this is what makes being an activist overseas so difficult right now. It's mentally, emotionally, and physically easier to advocate on behalf of others when you know everything is safe back at home. Now I spend my evenings longing to join in protests in D.C. and New York, instead of focusing my energies on planning actions and conferences here. Twitter and Facebook are cathartic, but not empowering like being with fellow Americans protesting in front of the White House to demand Trump change his mind.

So, there I was Thursday, volunteering with a European LGBTQ advocacy organization but totally distracted — and that's not the way it should be. We should have a strong foundation of legal rights in the United States to encourage others around the world to join us. We should be leading by example. Unfortunately, under Trump, that's impossible.

Luckily, the Maltese government has made LGBTQ rights a big priority. That's great for Malta, and for the next six months, it's also great for the entire European Union. Basically with the way the EU works, Malta gets to run things until June because they have the presidency of the Council of the European Union. Hopefully their leadership can push both the EU bureaucracy and member countries forward.

LGBTQ NGOs around the world may depend more and more on Europe as D.C. institutions move backward. So for now, looking to Europe means looking to this island country in the Mediterranean. For here, where Catholicism predominates and divorce was illegal until 2011, the transgender legislation is second-to-none. The country scored the highest in Europe for LGBTQ rights in 2016. Its voice will never be as loud as the United States can be, but it matters, too.

There is hope, and there will be progress. But I wish that my country were still doing its part — because it can and should do better. It would make engaging on these issues outside of our borders easier and more effective, and then I wouldn't feel the need to jump on a plane every time there's a protest.