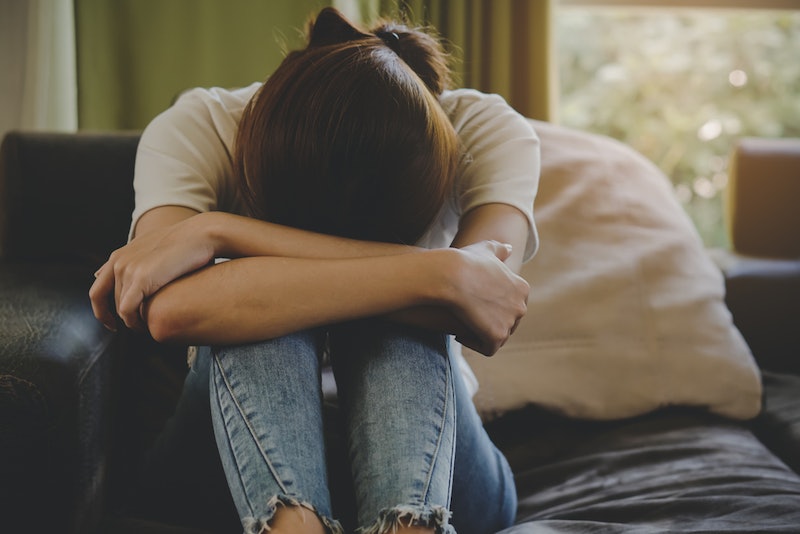 Imagine being stuck in a cycle of abuse and trauma, with seemingly no way to break free of what you were going through. Then, imagine that when you finally do seek help, being met with stigma and disgust surrounding the nightmare you were stuck in.

This is often what it can feel like to be an incest survivor. Whether you're being bombarded with anger from family members who want you to be silent, or supposed "allies" nonchalantly making incest jokes on the internet, navigating the world as an incest survivor can be painful. The #MeToo movement has given marginalized people a platform to speak out about sexual assault, but some incest survivors feel our current conversations about sexual silence have failed to be inclusive of them, their experiences, and the unique discrimination they face.

Though incest is routinely overlooked when addressing sexual assault awareness and prevention, it is pervasive in the U.S. and internationally. The Rape, Abuse, And Incest National Network (RAINN) estimates that at least 34 percent of the perpetrators in cases of child sex abuse are a family member of the victim. While fathers are reported to be the most common perpetrators of incest, according to a study published in 2014, any family members, including siblings, mothers, cousins, uncles, aunts, and other close relatives, can be a perpetrator, just as any person, of any gender, can be a victim.

Incest is a truly insidious form of sexual violence. Most children inherently trust their close family members, and when incest occurs, it can be profoundly shocking, confusing, and shameful for the survivor.

“I was eight years old [when my father started molesting me]. Like a lot of little girls, my father was my idol. Nothing was bigger than him. He was my best friend. He was someone I trusted and loved,” Julia, an incest survivor, tells Bustle. “It’s natural to feel like, ‘Oh my god, did I provoke this?’ when a person uses power to abuse — you don’t have a say in what’s happening.”

Moreover, victims are are often silenced by the people who they should be able to rely on the most: other family members.

Anne* says she was assaulted on multiple occasions. She tells Bustle, “I didn’t tell my mother about [the abuse] until years later, and then she basically blamed me for ‘putting myself in that position.’ And she still keeps contact with my cousin who assaulted me, despite me telling her how much it hurts me that she does.”

For Summer* the abuse started after she immigrated from the Caribbean to the U.S. to live with her father and stepmother when she was 16 years old. "The sexual abuse stopped when I started my first year of college. The emotional and physical abuse continued," she says. "The healing process was not an easy journey."

When she told her relatives about the abuse, she was discouraged from reporting it. "They were all afraid of him. He has just spent his life terrorizing everyone came he across," she tells Bustle. "By speaking about it, you’re basically dismantling some sort of legacy that they’ve conned themselves into thinking exists."

Dr. Patti Feuereisen, a psychologist, author of Invisible Girls: The Truth about Sexual Abuse, and founder of GirlThrive, tells Bustle it can be impossible for incest survivors to get away from their abusers. A majority of children on depend on their family members for guidance, as well as financial and emotional support. While every form of sexual assault is terrible and should be condemned, incest victims rarely have a safe place to escape, and they're most vulnerable when they're at home.

Sexual abuse in childhood can have devastating consequences for both the mental and physical health of survivors. In 2007, child psychiatrists said post-traumatic stress disorder didn't fully cover the extent of the symptoms they saw in young patients who had faced trauma. They proposed adding "developmental trauma disorder" to the Diagnostic and Statistical Manual of Mental Disorders, according to the American Psychological Association, to recognize "exposure to multiple, chronic traumas" at a young age.

Experts are still debating whether developmental trauma disorder should be added to the psychiatric manual, but the consequences that result from experiencing trauma at a young age are impossible to ignore. Julia says she experienced suicidal ideation at 12 years old. "I couldn’t go to anybody [for help], because how could I?" she says. "I thought, 'I’m dying tomorrow.'" She didn't attempt suicide only because her father started to leave her alone.

As research has shown, incest survivors may engage in cutting, eating disorders, substance use, and other self-injurious behaviors to cope with their trauma — until they are in a safe, supportive place away from their abuse, and able to seek trauma-informed mental health treatment. Other severe mental health disorders, such as borderline personality disorder, depression, and body dysmorphic disorder also have a high correlation with childhood sexual abuse.

Furthermore, Dr. Feuereisen explains that it's not uncommon for some childhood survivors to develop hypersexuality in response to the abuse, while others may experience a complete aversion to sex and sexuality. However, she says that, "Both are reactive [responses to trauma], and not forever."

Given how traumatizing incest is to the victim, and to our communities and families, it remains under-addressed in our society — despite the push to empower sexual assault survivors with the #MeToo Movement and Time’s Up campaign. Author Mia Fontaine offered up an explanation for this in a 2013 article for The Atlantic:

Given the prevalence of incest, and that the family is the basic unit upon which society rests, imagine what would happen if every kid currently being abused — and every adult who was abused but stayed silent — came out of the woodwork, insisted on justice, and saw that justice meted out. The very fabric of society would be torn.

This sentiment still rings true; incest is an uncomfortable topic that many of us, even those of us who have lived through incest, don’t want to address. Many incest survivors may feel responsible for keeping their families intact, despite the abuse that has occurred (or that’s still occurring). Other survivors may not remember the abuse. For all these reasons and more, incest is underreported, according to the journal Social Work Today, though there aren't exact estimates as to by how much.

“In my experience, incest, even once revealed, is something to cover up. There is no justice because it’s family,” Anne says. “Despite me telling multiple relatives about what has happened, they still insist on keeping up appearances and being friends with my abuser. They tell me to keep quiet about it, and blame me for it happening in the first place. There is no cutting off ties. Just shame and guilt for me, the victim."

The path to recovery and healing can become less challenging for incest survivors when we address the stigmas and myths associated with this kind of sex abuse that tend to be ignored.

"I wish that people who haven’t experienced incest knew that just because someone is family, it doesn’t make them a good person — whether that be the abuser themselves, or the people who continue to support the abuser. Sexual assault is never OK,” Anne says. “Sexual assault can happen anywhere, even at home, a place normally associated with safety and security, and with people you should trust to love and protect you.”

"We tend to sit in silence and fear and shame and guilt that really doesn’t belong to us," Summer says. "We know that once we start standing in our truth, we’re going to upset a lot of people. It’s about time that we as incest survivors get to a place where we realize it’s OK to just piss people off."

"It's crucial to talk about sexual abuse, particularly incest, when you are young — as a teenager, or in your twenties," Dr. Feuereisen tells Bustle. "We have to trust and believe any [person] who comes forward. We have to understand they couldn’t get out."

Julia tells Bustle she believes talking about trauma is the only way to process it, and she hopes children who are being abused will realize they aren't alone. "I’ve decided to really use my story as a means of healing," she says. Julia wants survivors to know they shouldn't blame themselves. "You were taken advantage of," she says.

Summer says she also internalized a lot of harmful rhetoric about her abuse. "Be willing to challenge your story," she says. "We have told ourselves so much bullsh*t."

However, the message is not only that we need to be more willing to openly talk about incest as a community, but that survivors can ultimately heal, feel healthy, and lead fulfilling lives. Research is showing us more and more every day that, with the help of mental health professionals, our brains can actually be rewired after trauma.

Dr. Feuereisen says that a practice she often uses with the incest survivors is called remapping. In remapping, similar to exposure therapy, a survivor will mentally revisit the space or situation in which the trauma occurred to retrain their brain to cope with those triggers. "You are taking that fear and remapping it when you take over your trauma and put it in a positive light. By remapping your experience over and over again, you make the trauma smaller," Dr. Feuereisen says.

"I want it to be clear that sexual abuse and incest is not a death sentence in any way," says Dr. Feuereisen. "You are not damaged goods. You can get better."

Hope for healing for incest survivors is not some fleeting dream — substantial evidence has proved that healing after sexual abuse is completely possible, and talking about it, without shame, is a key aspect of recovery. As our cultural discussions about how our society can eliminate sexual violence keep growing, incest survivors deserve to have a voice in the #MeToo conversation, policy, advocacy, and beyond.