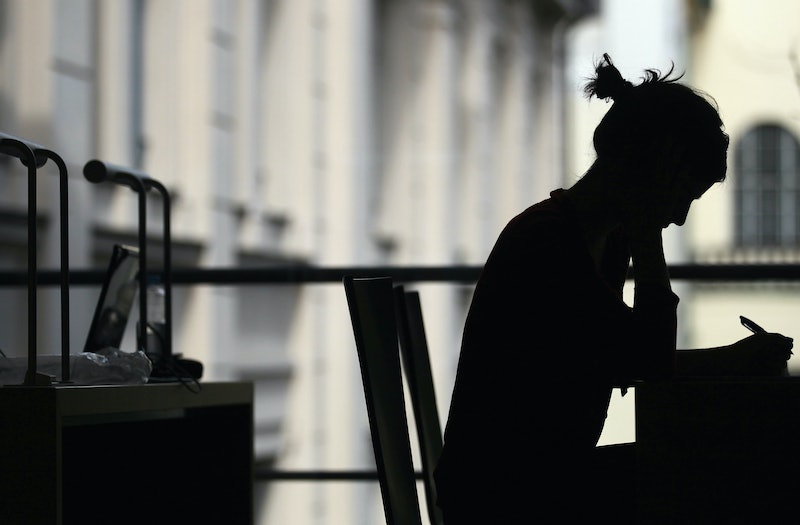 While Hollywood never seems to tire of sensationalizing dissociative identity disorder (DID), formerly known as multiple personality disorder, real-life symptoms can be much more subtle — and much more common than you'd think. According to the National Institute of Mental Health (NAMI), up to 2 percent of people in the United States live with dissociative disorders, which include dissociative amnesia, depersonalization disorder, and DID, and women are more likely to be diagnosed with this spectrum of disorders than men are. But living with dissociative identity disorder, according to someone managing the diagnosis, can be a highly complex experience.

Mental health advocate Amelia Joubert has been in the mental health system since age six. After experiencing profound trauma throughout early childhood, Amelia was diagnosed with DID at age 15.

“For a long time growing up I didn’t realize that not everyone lost time or heard whispers,” Joubert tells Bustle. “I just honestly thought it was something no one talked about because the whispers said not to. It wasn’t until 8th grade when I talked to someone else about what I was experiencing did I realize most people don’t live life like this. Finally, one of the people in my head started to actually talk to me and said they were just there to keep us safe. I didn’t know what what going on, I thought maybe I was haunted. I know it sounds wild, but I honestly didn’t have a better answer.”

Many clinicians consider DID a response to extreme childhood trauma, and symptoms can include amnesia that might span days, weeks, or years, and emotional numbness. People with DID can also experience depression and anxiety, and suicidal thoughts and behaviors, according to NAMI. People with DID often experience their sense of self as an internal "system" of identities, alters, or parts, and may use the pronouns we, us, and our when referring to that system.

A year after eighth grade, Joubert was diagnosed with DID, “and things finally made some kind of sense.”

“The immediate feeling was relief, but panic following very shortly after. Accepting the DID meant accepting the trauma — and that’s what my brain had spent so much time trying to keep me from. I was in denial for quite a bit after the diagnosis, but when I finally came out of it I was able to get to know my system and begin healing.”

Joubert says that navigating the healing process in a culture that continues to stigmatize DID has been challenging. “We had a lot of experiences with people who just didn't understand DID. After a suicide attempt, a psych doctor came into the room and said ‘I see you are diagnosed with DID, is that when you forget who you are or when you pretend to be other people?’ He was dismissive and made us feel worse in a time where we were already struggling a lot. We had similar experiences in the medical community and in everyday life. We are also tired of the 'evil alter' trope that is portrayed time and time again in media.”

I fully believe I would not be here today if it wasn't for my system.

The desire to counter pervasive misconceptions and tropes about DID sparked Joubert’s mental health advocacy. “I would say one very popular misconception is that people with DID don’t know they have it or don’t know anything about their alters. For some people, especially people who have not yet been diagnosed or started therapy, this is true,” Joubert says. “However, many people with DID are very aware they have it and know their alters, some even consider them family. Getting to know alters and working to be co-conscious, so we know what happens when alters are out, is a huge part of treating DID.”

Joubert encourages newly diagnosed people to seek support from trauma- and DID-informed helpers. “The average person with DID spends seven years in the mental health system before receiving a diagnosis. That is seven years they could have been in treatment, and one of our goals is to get that number down by educating both the general public and health professionals on what DID truly is," Joubert says. "We are inspired to do the work we do by the people in the DID community and our own experiences. DID is so stigmatized and [this] effects people with DID in big ways — [stigma] can impede healing,” by acting as a barrier to getting treatment, Joubert says.

If you are diagnosed with DID and seeking treatment, working with trauma-informed providers is essential, Joubert says. “Above all your therapist should be someone who respects you and your whole system. Therapists who refuse to acknowledge alters or say their names, [and who] push you to remember trauma or integrate when you aren't ready, may do more damage than good. Also, you can always decide they aren't a good match for you. If a therapist makes you uncomfortable or raises red flags for you, you don't have to see them. People seem to forget this sometimes.”

Despite the profound challenges that both trauma and DID have given Joubert, she also says that her system’s adaptation to trauma has been nothing short of lifesaving. “DID saved our life. I fully believe I would not be here today if it wasn't for my system. Because parts of me held the majority of our trauma, other parts got to enjoy childhood and function through school. My alters all hold different roles, but they are all very important. Some alters are very talented at certain things, and I am not sure that our system would still have so many different talents if we were integrated.”

“It’s not easy, but overall, who we are is who we are, and it’s how we survived. I’m very grateful for that.”