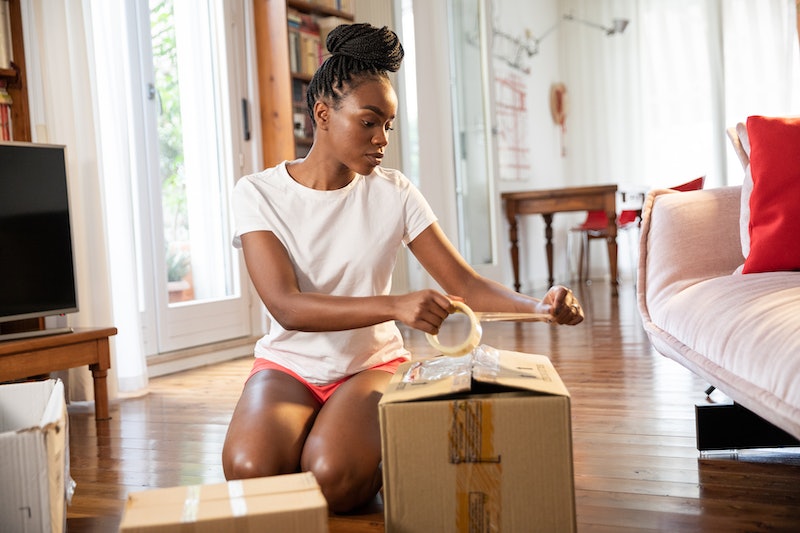 In March, I considered leaving my cozy apartment in a lively Brooklyn neighborhood for a cheaper, larger place, but with a longer commute to work. The apartment with the lower rent won out, but at the time, it was a hard choice — "I'm deciding between two equally great options," I told friends. Fast forward to June, over three months after New York state ordered citizens to shelter-in-place, and it feels quaint that I considered passing up a bigger, more affordable place to be near bars and restaurants.

Many others had their housing priorities completely upended because of coronavirus. According to The New York Times, an estimated 5% of residents left New York City between March 1 and May 1. Similar trends have been seen in other populated cities. Some young people are moving back home to their parents or relocating to new cities. Others found new apartments in their current area while trying to keep a six-foot distance from movers.

Moving Back Home In Quarantine

Home sale and rental platform Zillow has seen a 33% increase in short-term lease offerings and an almost 50% increase in furnished listings, says Joshua Clarke, Zillow’s economist. “[One] possible explanation is people subletting their units as they move back home with family” he tells Bustle. Zillow’s analysis found that 2.7 million adults moved back home to their parents during March and April, a 9.7% increase from last year.

Mia, 25, moved to Brooklyn in October 2019, but went to her family home in Vermont when COVID-19 cases in New York rose, thinking she’d only be there a few weeks. Then, she lost her job. "Our building management wasn't very forgiving in giving us payment options," she tells Bustle. "At the end of April, my roommate and I decided to break our lease and move out. Thankfully we both had backup housing options available," she says, referring to her family home.

Pre-coronavirus, Taryn L., 30, planned to travel for a few months. She had a flight booked on March 17 from New York to Austin, Texas, to kick off her trip, but changed it last-minute to go to her parents in Arizona. "Luckily, I had already been in the process of packing up my life and putting things in storage, but to not know when I'd return was, and still is, upsetting," she says. “The last time I moved out, I told my mom to never let me back in with more than a suitcase," she says. "I have constantly reminded myself that it's temporary [...] and I had to make responsible, safe choices for myself.”

Gwenn, 26, decided to move back to her small hometown in the Netherlands, 160 miles north of where she’s finishing her master’s degree, when grocery stores nearby began to run low on necessities. While she's glad she made the choice, especially because her grandmother unexpectedly passed away a few weeks later, the transition hasn’t been easy. "It was very difficult adjusting to living at home again after living on my own for the last four years. I had to get used to how my mum runs the household and expects things to be done."

Moving To A New City During The Pandemic

Victoria, 27, traveled back to the United States from the UK in mid-March. "I was in a building where the median age is around 70. I felt like I was putting our community at risk by staying here when there was a ventilator shortage” she explains, noting that a coworker of hers had been exposed to COVID-19.

Heather*, 32, is planning to move across the country to be closer to her family in California. "I've been quarantining alone the whole time. That's been lonely in and of itself, but the amount of effort it takes to get home just seems so insane now. And if we have another outbreak the thought of being isolated again is really hard to stomach."

Cassie is taking this opportunity to leave Chicago. "I just booked a shared room in Denver on Airbnb for June," she tells Bustle. "Making the decision to move for the time being hasn't scared me. I am fortunate enough that I can work remote, and if it doesn't work out then it doesn't work out".

How Do You Find A New Place To Live In A Pandemic?

As if moving wasn't stressful enough, people are relocating at a time when home-hunting is nearly all online. “Landlords are now relying on agents to get a lot more information about applicants to screen them,” says Joan Kagan, a licensed real estate associate broker for Triplemint. “They are being very strict about who they are letting in and showing their spaces to.” While certain states, like New York, are allowing in-person showings at landlords’ discretion as lockdowns lift, Kagan says virtual viewings are likely to stick around.

Deepika, 24, opted to move to a New York City apartment she hadn't seen because it was managed by the same company as her current place. Hanna, 24, who is moving with her partner, has found the experience pretty anxiety-inducing. "I never thought I'd consider moving into a new place without having seen it in person yet (wide-angle lenses can be deceptive!), but I also feel fortunate that it's even a choice I'm able to make right now."

To compensate for the limitations of virtual viewings, Kagan now schedules screen-share meetings with clients, where they watch videos and 3D tours together, and shows clients the surrounding streets on Google street view. "There's now more of a push for a more pleasant environment — pleasant views and interiors — over location,” she says, adding that "it's still kind of a clunky experience," and that sensory factors like smell and sound are impossible to gauge virtually.

For many, moving has come with lifestyle changes they hadn't planned for. Taryn A., 29, relocated from San Francisco to L.A. to live with her girlfriend in May, but wishes she'd been able to have a goodbye party. "I'm a big community person, so missing out on a drink/game night with all of my best SF friends is really, really hard. [...] It was sad knowing I couldn't hug them."

Steph, 28, moved to New York City to pursue a new career, but is already planning her exit. “What makes [NYC] so great are the recreational, social, career events, and opportunities which just won't happen or won't be the same for a long time,” she says. The process has made her reflect on more than just where she and her boyfriend want to live next. "It's hard to have bitten the bullet to quit and move [to NYC] with no real plan and then have that opportunity sort of taken because of this pandemic," she says. "It definitely urges me to act faster when I want to do something because you never know what the future holds, and what it will give and take from you."

More like this
20 Genius Kitchen Storage Solutions For Decluttering Your Space
By Emma Garza
Is The Insta-Famous Always Pan Actually Worth It?
By Jessica Goodman
The Cabincore Home Decor Trend, Explained
By Jessica Goodman
The Most Powerful Photos From The Weekend’s Abortion Rights Protests
By Melanie Mignucci
Get Even More From Bustle — Sign Up For The Newsletter