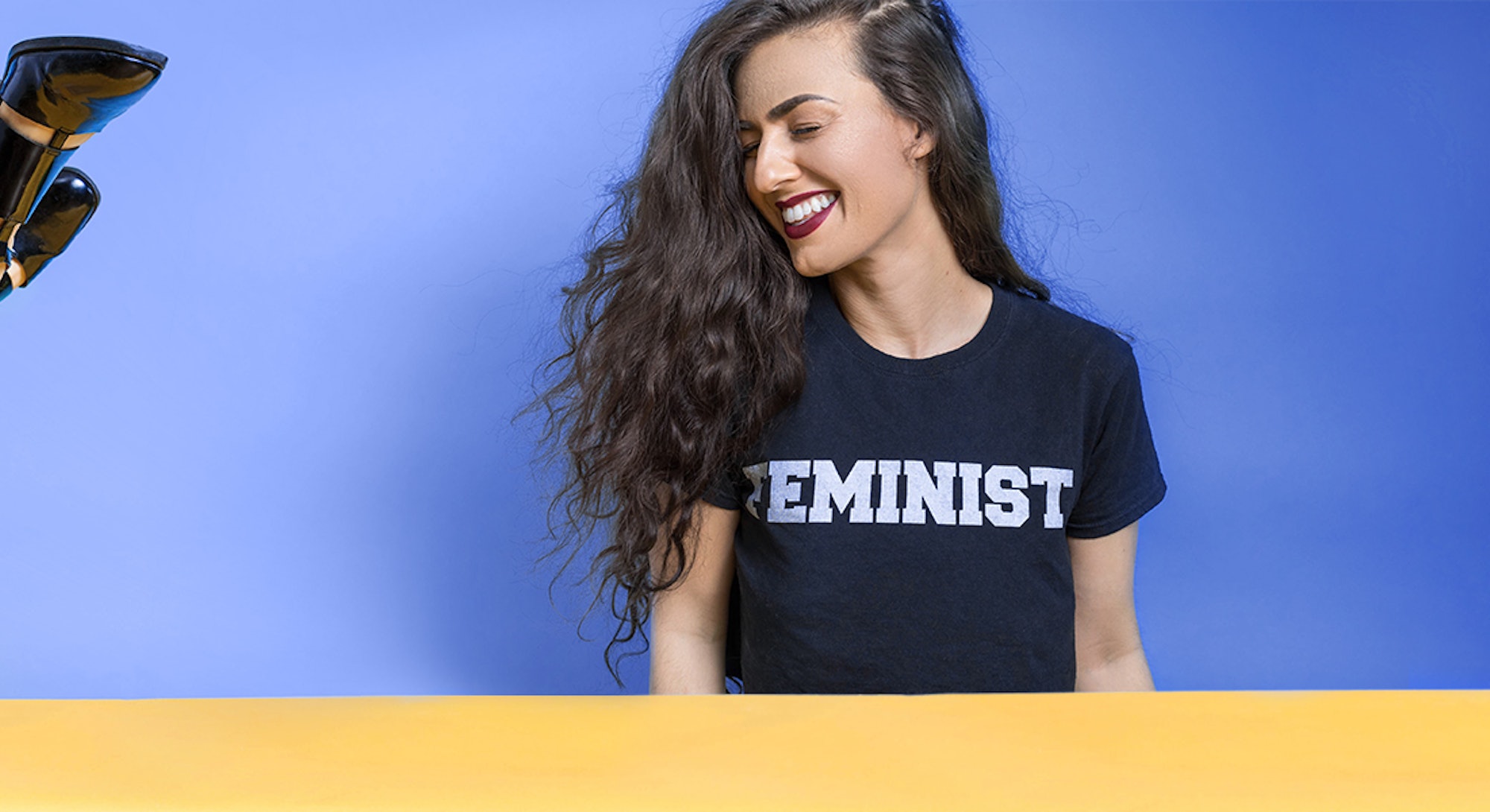 Dana Suchow started shaving her legs and underarms in the 6th grade. Like many of us, Suchow had grown up watching older women remove their body hair. She had never seen a woman with bushy armpits or thick, untrimmed leg hair. She watched her mom use an epilator and, eventually, she would use one, too. And while Suchow tells me she wasn't particularly concerned with managing her body hair growing up — not as much as other things like acne, anyway — looking back, she can see a specific relationship between her self image and her body hair. Without even consciously disliking her body hair, she — like most women — had decided her body hair had to be gone. That it had to disappear. Suchow would go on to have her armpit and nipple hair removed by lasers. And, later, she would go on to do something she never expected to do at all — stop shaving her body hair entirely.

Dana started a fashion blog called Do The Hotpants in 2012. When she realized that the fashion industry's often unattainable beauty standards were fueling her eating disorder, Suchow shifted gears and refocused the site. She made it "her mission to use her own life experiences to educate, empower, and uplift anyone struggling with body image." With a 33k+ following on Instagram, Suchow was (and still is) starting and fueling serious conversations about feminism, body image, and the intersection of it all. She began creating and leading workshops and feminist events. And in January 2017, Suchow specifically found herself thinking about her body hair differently. So, without giving it much initial thought, she stopped shaving altogether, and started dealing with something she had spent 20 years trying to make invisible.

I talked to Suchow about what's it like to suddenly stop following a beauty norm you've adhered to since age 12, and she told me that it's not always easy, or fun. And while Suchow emphasizes that not shaving certainly doesn't make her more or less of a feminist, for her, it's an important way to challenge both traditional beauty standards and how she views herself.

"I stopped shaving everything right after New Years. I was single. It was winter. There was no reason for me to shave every Friday night like I had been doing for years," Suchow tells me. "I still continued to remove my face hair and pluck my eyebrows, but shaving made no sense because literally no one was seeing this body without clothes at that time."

"When I stopped shaving, I didn't think anything of it. I didn't see a hairy woman and get inspired," she says. In fact, she had been so busy with her work life that she mostly just appreciated getting back the hour (and the money for razors) each week that she had previously spent shaving to instead spend focusing on her career. "I just thought I'd shave when the time came. But over the weeks, as my body hair began to grow, I kind of got mesmerized by it. It was empowering to rub my furry and soft legs and begin to reclaim my body as my own. It was cool to see my body in its natural state."

"I know I still fit into society's beauty standards. So for me to not shave is less radical than say, someone fighting daily to be properly gendered, or a woman dealing with PCOS," Suchow tells me. But the recognition of privilege doesn't mean Suchow doesn't have any hang-ups when it comes to herself or her hair — far from it.

"I still have my own struggles and insecurities surrounding my own body hair. I am only one woman and I am trying my best to challenge the unattainable body image ideals that exist for women in this country."

As far as her romantic life goes, becoming a woman who doesn't fit a particular beauty ideal has been tricky. "It's interesting. While I'm scared to show my hairy body to a man, I have zero problem sharing pics of it to thousands of people on Instagram."

Suchow tells me that she's not sure if she feels comfortable sharing the photos because of the "woman friendly" space she's created with her Instagram and blog, or because she separates her real life from her social media. Either way, though, Suchow realizes that the photos are very different than showing her body hair to a date in real life.

"A thousand comments from strangers is still less scary than one comment from a man in the bedroom," Suchow says.

"I'm the furriest I've ever been," Suchow says. "Even before I started shaving in middle school my hair wasn't this...loud? mature? dark? I have a hard time describing my hair without using the word 'manly.' But I refuse to use this word to describe body hair. Women can have body hair. Men can have body hair. And everyone in between can have it too. It's not something that should be tied to the masculine or feminine. Language can have more power than we give it credit for. "

And it's not only romantic partners or strangers who struggle with the concept of a woman with body hair. Suchow herself struggles with it. "Sometimes I look at my leg hair and get disgusted. I feel unclean or unattractive. But instead of running and shaving, I've been trying to sit with those feelings. Unpack them. Learn where they're coming from. Where that voice originated. I'm hyper aware of anti-hair messaging now. Every one is hairless in media and advertising. It really is a political act for a woman to grow her body hair, however small of a political act that is, it's important to try and take back our narrative."

"That there's a huge community of women who don't want to shave but are ashamed not to," Suchow says, noting that she gets messages from women every day sharing photos of their body hair or notes about how she's inspired them to stop shaving, too.

"One woman's boyfriend actually didn't like it and she said I empowered her to break up with him. People just want representation and to feel less alone. They want the same things I want," Suchow says. "I want to feel like I'm not the only person in the world with hairy legs because that's terrifying. They want that too. And together, every day, we fight the feelings that we're not good enough or pretty enough to simply exist in our body's natural state."

As for what the future holds, Suchow doesn't know if she will ever return to shaving, but if she does, it will be purely her choice rather than a move made to fulfill a societal construct. "A lot of people have told me that if I feel uncomfortable I can go back to shaving my legs and it doesn't mean I'm less of a feminist. And I agree," she says. "But I have decided I will not go back to shaving until I am comfortable with my unshaven body. I have to be comfortable being intimate with another person. And I have to be comfortable wearing shorts in the summer."

"And that way, if I choose to shave again, I will know it's 100 percent for myself and not because I'm scared of being viewed as less attractive. I don't want society to dictate the level of hair I'm allowed to have. I want that control back."