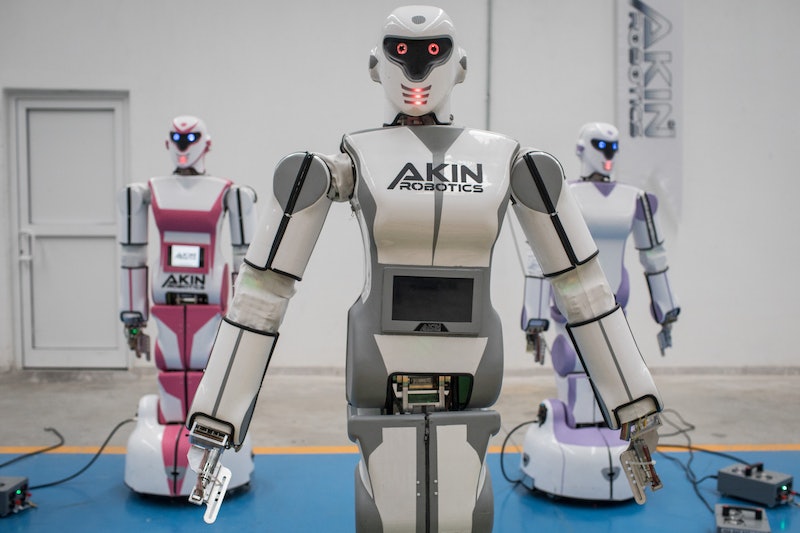 The world is gradually becoming more automated. Self-checkouts and AI assistants on our phones are the least of it; robotics are gradually becoming involved in industries across the board, from the auto industry, which, according to 2017 data, uses the most robots in the world, to electronics and plastic manufacturers. And for some people, that may mean job automation, and thus, endangerment. But the way this process will play out has some interesting implications for the gender gap, according to a new report.

Robotics and their threat to jobs can be over-hyped by the media, in part because we don't distinguish between automation and artificial intelligence. Kriti Sharma, VP of Artificial Intelligence at SAGE, tells Bustle that Google queries reveal a lot of worry about robots and the job market. "When people search for 'AI' or 'robots'," she says, "they ask questions like 'are robots stealing jobs'. But when they search for terms like 'machine learning', which is a subset of technology within AI, it’s more like 'what is machine learning?', 'how do I learn machine learning?', or 'how can it help my company/business/life?'" The ways in which robotics are involved in human industry are complex, she says, and media oversimplification can risk distortion: "We need to start to understand what these words mean. We’re just scared by the buzz."

Looking at the data from the new report from Website Builder Expert reveals that countries at the forefront of technological innovation — in industries like electronics — are the most vulnerable when it comes to job automation. And in 80 percent of the 33 countries studied, men were at higher risk of having their jobs automated or replaced by a robot than women. Analysis of the data reveals that part of the gender divide here is down to who does what kinds of jobs. Skilled manual labor industries, like building and plumbing, are dominated in many countries by men, because it's been historically gendered that way. The problem is that these jobs may be the next big stop for automation.

However, 'nurturing' jobs that have traditionally been seen as the province of women, such as teaching or nursing, are seen as less vulnerable to automation. But women's jobs may be automated in other ways. The service economy, including jobs like cabin crew and waiting tables, is a big candidate for automation, and a study in 2017 revealed that it accounts for over 50 percent of women's jobs worldwide. But there's another way in which women's jobs can be automated, and it's actually tied to their getting cooler, better jobs. Germany's women are at risk of job automation because their most popular jobs include technician and medical officer — so they've moved up the job ladder enough to put themselves in danger.

What's interesting, though, is that the countries who top the list of least-vulnerable countries tend to have more gender equality. Luxembourg, which comes in first, was ninth in Europe for gender equality in an EU study in 2015. The remainder of the top eight include Norway, Sweden, the U.S., the UK, Iceland, and Israel. And women in those countries are much more likely to have jobs that involve intellectual skills and higher learning. Result: less chance of automation.

Here's a really important caveat. All of these warnings are based on predictions about automation, AIs, and robots that might not come true. Have an interaction with a legal chatbot or an AI voice-recognition system, and you'll discover the limits of its powers pretty quickly. We can't even figure out self-driving cars yet. And, as Sharma tells Bustle, AIs in particular don't need to take away jobs. "We are living in a society where machines are here to help us, not become human themselves," she says. Automation may not be the full story; it's more likely that some people will job-share with machines, as in call centers where recorded voices direct you to a human operator.

So, don't get too excited or upset about some forthcoming "robot revolution." It may turn out to be far more complex and intriguing than media hype makes it out to be — especially for women.