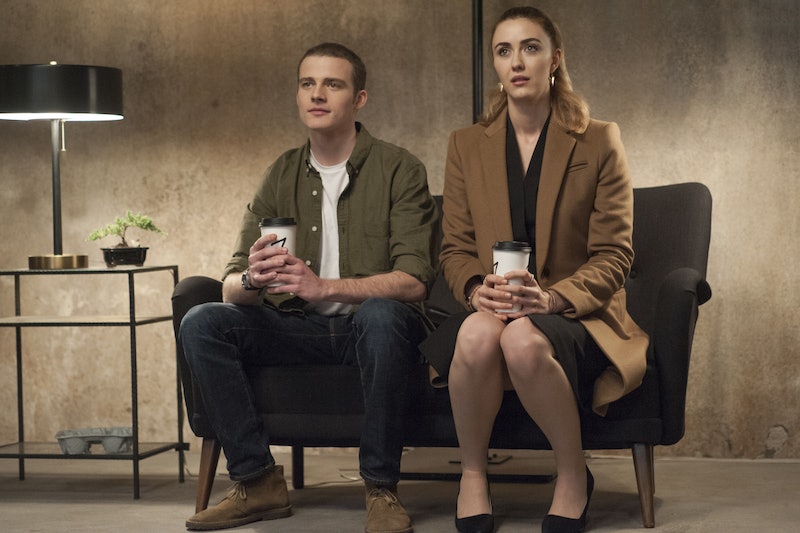 Suzanne Tenner/Showtime
By Allie Gemmill
May 22, 2017

Poor Tracy. Such a sweet girl, such an untimely demise. It was barely halfway through the Twin Peaks premiere when something killed Tracy, making her and her boyfriend the first victims of the new Twin Peaks. The brief time spent with Tracy might actually be indicative of something more ominous happening. What is the creature that attacks her? Why does it appear out of nowhere in that strange glass box and yet somehow seems to break through the glass to kill them?

One of the biggest plots in the first two parts of the Twin Peaks revival is the mysterious glass box in New York City, which has multiple cameras trained on it. A young man is tasked with watching the box and switching out the SD cards when they get full so that the cameras can keep running smoothly. There's only one hiccup in the easy yet apparently top-secret plan: Tracy.

Tracy, the love interest in this plot line, apparently regularly brings lattes to her mystery man in the hopes of wooing him into letting her into the top secret room. One night, she shows up and there appears to be nobody on the premises (where did that security guard go, though?) except this young man. She manages to charm her way into the secret room, where she remarks how weird the setup is. Things only get weirder when, just as these two twenty-somethings start hooking up, a black mist and what appears to be a white, creepy figure appears in the box.

The guy notices it first and tells Tracy to stop doing what she's doing. Eventually, both of them are staring at the crazy black box. The white figure gets closer and closer to the glass and it's screeching. Yes, screeching. It manages to break through the glass and rush towards the ill-fated lovers. As Tracy and her beau scream out, this figure appears to claw them to death.

Dale Cooper shows up in the glass box later on in Part 2 of the Twin Peaks revival, that seems to be a time jump because Tracy and the young man are still alive. What's interesting is the implication that the glass box is somehow connected to The Black Lodge and its inhabitants. Will there be another glass box to pull in strange creatures? Who exactly is in charge of these observations?

This creature and the glass box definitely have some supernatural properties and connections to The Black Lodge in Twin Peaks. Time will tell just what that connection may be.