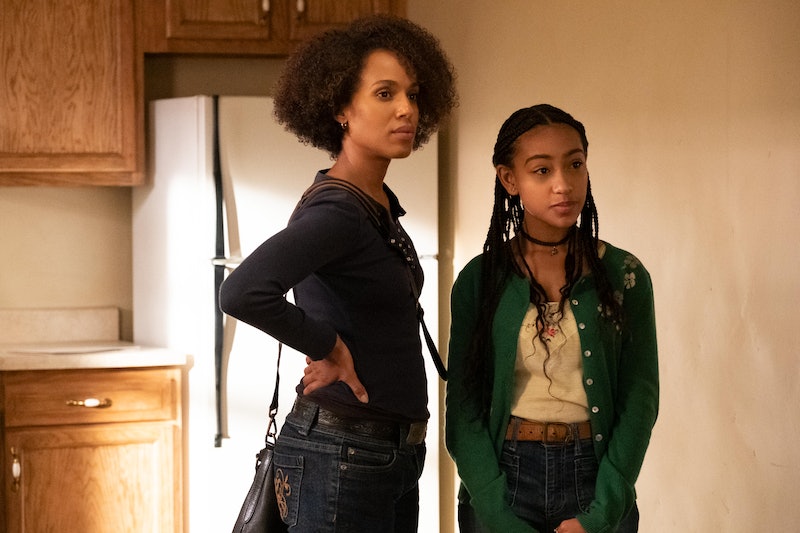 Lexi Underwood is no stranger to transience. Before making her Broadway debut in The Lion King at 11, she weathered the grueling schedule of the show’s touring production, living out of hotels and traveling around the country. The 16-year-old actor knows her childhood was far from normal — it’s something that she and Pearl, her character in Hulu’s adaptation of Celeste Ng’s novel Little Fires Everywhere, have in common.

The show follows Mia Warren (Kerry Washington) and her daughter Pearl (Underwood) as they move to the suburban idyll of Shaker Heights, Ohio. Their lives have been spent moving from place to place, as artist Mia gets her inspiration from her surroundings. They rent a townhouse from Elena Richardson (Reese Witherspoon) and the two families become increasingly entangled while the local community reels from a complicated child custody case. The more time Pearl spends with the Richardsons, the more she begins to scrutinize the details of her own upbringing.

“When Pearl first gets to Shaker there is a moment [where she realizes], ‘Maybe the way my mom has been raising me isn't normal after all,’’' Underwood says. “Mia is all that Pearl has ever known, Pearl sees Mia as her hero, and I think it is a bit heartbreaking for her to start questioning everything.”

Underwood's performance as Pearl is particularly raw when she and Mia fight. Though their relationship has a palpable intimacy, the Richardsons manage to enchant Pearl with their big house and warm smiles. Slowly, she begins to turn to them instead of her mother in moments of crisis. “Pearl has always craved this stability, this perfect life," Underwood adds.

At first glance, the Richardsons appear to have reached a state of domestic nirvana: attentive mother, lawyer father, four uniquely brilliant children. Pearl, on the other hand, is an only child of mysterious parentage who has had to move schools, fend for herself, and learn how to cook and clean and withstand constant change. That contrast is the linchpin of the show.

As the story unfolds, Pearl is often at the center, sometimes unknowingly. Moody (Gavin Lewis) adores her to a fault, Lexie (Jade Pettyjohn) uses her for her own selfish gain, and Elena manipulates her. “Everyone thinks Pearl is just a shy girl who is just her mother's follower, but I think she is so much more than that,” Underwood says. “Pearl is strong. Pearl knows what she wants, even if she doesn't convey it.”

I see the same quiet determination in Underwood when we meet on the Little Fires Everywhere set. With a production company to her name (aptly named Ultimate Dreamer Productions), she hopes to one day move on to directing and producing her own projects as well. She points to Witherspoon and Washington as role models for how to conduct a set and handle sensitive projects with care; she saw firsthand through them the kind of actor, boss, and creative she wants to one day become.

Since wrapping filming on Season 1, Underwood has found it difficult to leave Pearl behind. She still wears a pearl inlaid bracelet that Washington gave her on their first day of filming as a reminder of their bond. “She said it was a pearl for her Pearl," she says. "In that moment, I just started crying."

More like this
The Plane Crash In 'Dear Edward' Is Based On A 2010 Tragedy
By Grace Wehniainen
Netflix Shut Down 'Bridgerton' S3 Rumours About A “Very Dark” Storyline
By Bustle
Here’s What Happens To Bill & Frank In 'The Last Of Us' Video Game
By Brad Witter
Meghan Trainor & Daryl Sabara Are Expecting Their Second Baby
By Jake Viswanath
Get Even More From Bustle — Sign Up For The Newsletter
From hair trends to relationship advice, our daily newsletter has everything you need to sound like a person who’s on TikTok, even if you aren’t.