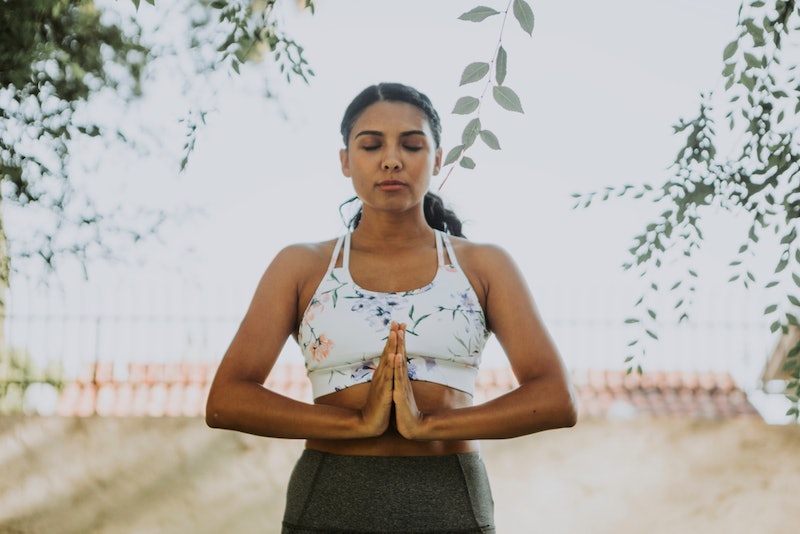 You sit down, focus on your breathing, and attempt to get rid of all the stress of the day through a few minutes of meditation — but what really happens in your brain when you're meditating? The answer, experts tell Bustle, is more complex than it might seem. The neuroscience of meditation is a broad and complicated area of research, and scientists are often more interested in the impact of your meditation practice on your brain over the long term.

"If meditation just produces changes when you're meditating, it's like a drug, and it would wear off — and what would be the point of that?" Dr. Richard Davidson, PhD, the William James and Vilas Professor of Psychology and Psychiatry at the University of Wisconsin–Madison and founder of the Center for Healthy Minds, tells Bustle. However, the changes that occur in your brain while you're meditating build up over time to produce remarkable shifts in cognition and brain structure. The meditating brain is a very cool thing.

Your brain on meditation looks very different depending on how long you've been meditating — and, importantly, what kind you're practicing. "When one meditates, these brain changes relate to the stages of practice, and the meditation technique one uses," Dr. Yi-Yuan Tang, PhD, endowed chair in Neuroscience at Texas Tech University, tells Bustle. According to his research published in Nature in 2015, brain activity changes depending on whether you're a full novice, a relatively experienced meditator, or a pro. If you're in the early stage, Dr. Tang says, "the early stage recruits more brain activity because the meditator puts more effort to control their mind." During the middle stage, brain activity is "mixed", but when you become seriously experienced, brain activity drops.

"The advanced stage often involves less activity given that the meditator is skillful and practices with less effort," Dr. Tang says. He notes that blood flow in the brain tends to show the same story: there's more of it when you're still early in your meditation practice, but less as you learn to meditate skillfully.

When you look at a meditating brain, neuroscientists tell Bustle, one of the major things that may stand out to an expert eye is its brain waves. Dr. Michael Posner, PhD, professor emeritus at the Department of Psychology at the University of Oregon, tells Bustle that one of his most novel research findings involves the white matter of the brain. In people who meditate, white matter, which makes up the nerve cells of the brain, alters noticeably in various brain regions, particularly the anterior cingulate cortex, which helps process emotions. "In 2010 we compared two weeks of meditation with a control, and found that these particular pathways were altered," Posner says. The reason, he's now discovered, is down to a particular kind of brainwave: the theta rhythm.

"Meditation training increases a rhythm of the frontal lobe called the theta rhythm. It's about four to eight cycles per second or herz," Dr. Posner tells Bustle. Studies have shown that when you meditate, your frontal lobe produces theta waves of electrical activity, which are associated with relaxed forms of attention. It's these theta waves, Dr. Posner says, that are responsible for building up white matter over time. In the posterior part of the brain, meanwhile, your brain is producing alpha waves, which may help block out distracting stimuli and new information. Interestingly, though, in seasoned meditators, theta brain waves are more common — and not just when they're practicing. "Even when you're not instructed to meditate, we still see increased theta following meditation training," says Dr. Posner.

Neuroscience shows that brain activity alters depending on what kind of meditation you're actually practicing. A lot of scientific studies, Dr. Davidson tells Bustle, have focused on mindfulness meditation, but that's not the only choice — and other kinds can change the brain in different ways. One of the possibilities, he says, is a kind of meditation known as "constructive." In those kinds of meditation, "there is an active process of literally generating a quality in the brain." If you choose to practice a constructive form of meditation like loving kindness meditation, which is about producing benevolent feelings towards yourself and others, your brain will show different activity to other kinds of meditation, he says: "Mindfulness strengthens circuits important for attention, whereas loving kindness meditation strengthens circuits important for positive emotion and empathy."

Even if you're doing plain mindfulness training, your brain can still show up different activity depending on where you choose to focus. “Meditation has been noted to make electrical rhythms in the brain faster and excite different parts of the brain depending on what you are focusing on during meditation," Dr. Clifford Segil, D.O., a neurologist at Providence Saint John's Health Center, tells Bustle. "Meditations with guided imagery activate the visual cortex, for example." If you're just thinking about your breath, however, the visual cortex will remain quiet. During mindfulness meditation, research has shown that the thalamus tends to become more active during meditation, reducing incoming information that could provide a distraction.

However, a lot of questions remain about what happens in the brain while you're in the process of meditation. While we know about the changes that meditation can create — for instance, the amygdala, which helps with emotions, has been shown to be affected by just eight weeks of mindfulness meditation — it's less clear what it does while you're sitting down in a meditative state. And when it comes to the "complicated neurochemical changes in the brain" while you meditate, Dr. Tang tells Bustle, "we still know little about it."

There are many aspects of the meditating brain that remain a bit of a mystery right now, and the answers will likely depend on what kind of meditation you're doing, how long you've been doing it, and many other factors. When you're sitting down to meditate, you're taking part in a pretty phenomenal neurological event — though it's likely best to forget that, and just immerse yourself in your practice.