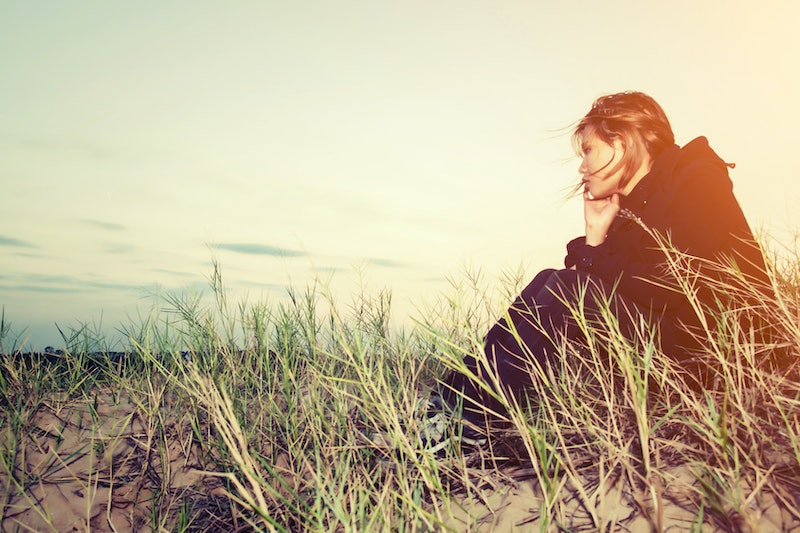 Great news: on Dec. 22, the last Mercury retrograde of 2017 officially ended and put a stop to the madness it may have created in our lives. Not-so-great news: Don't celebrate just yet. Immediately afterward, Mercury retroshade — a "shadow period" that extends Mercury retrograde's effects for about two weeks as the planet turns direct — began. Retroshade goes on for two weeks before and after a retrograde cycle, and it will have its own special side effects on us. This means that Mercury retrograde's effects may still be alive and well through at least Jan. 10, 2018. I know. Will we ever be free?! What are we supposed to do now?! Should we all panic?! We can start to figure out what we should expect by finding out what Mercury retroshade means for all of us, according to our signs.

First, though, everyone take a deep breath, because Mercury retroshade is not going to be quite as hectic and confusing as retrograde was. This is actually a time to reflect, and it's much more calm. It's a good time to think about our past and try to learn from it. In fact, you might find the two weeks of retroshade to be really helpful, especially if you're trying to move forward with resolutions in a new year.

According to Astrostyle, "The second Mercury retrograde shadow is all about integration and processing. Sure, Mercury retrograde might have thrown our lives into a total tailspin, but what are the golden lessons to be gleaned? What necessary losses and changes did Mercury retrograde prompt? Utilize the time Mercury turns direct to the end of its shadow to make those big bold changes."

Mercury retroshade will end on Jan, 10, 2018, so you have a few weeks to bask in the glory of reflection. It's not all good, though — astrologers say the feelings of confusion and uncertainty from retrograde will definitely still linger. You can find out what this means to you on a more personal level by taking a look at your zodiac sign.

Were you planning on booking a spontaneous trip right after the New Year? You might want to hold off. Mercury retrograde brings about a lot of traveling complications and mishaps, especially for you, and retroshade isn't looking too different. Plus, spontaneity is not exactly encouraged for this shadow period. If you want things to run smoothly, your best bet is to wait until after Jan. 10 to travel or book a trip.

It's important to note that while restroshade is a good time for reflection, it's also similar to retrograde in the sense that it negatively affects making big decisions. Cafe Astrology notes that this past retrograde period meant a Taurus should avoid all big financial decisions, and this holds true during the shadow period. Reflect on past financial moves and try to learn from them during retroshade, rather than making any new ones.

Things are going to be tough for Geminis during this two-week shadow period. Jaye from Gifted Astrology tells Bustle that because Geminis are ruled by Mercury, they'll be feeling some strong effects through retroshade. Mercury means Geminis are all about communication and deep thoughts, which means retroshade will feel intense. Jaye's advice is to work on letting go of the past and being kinder to yourself.

According to Cafe Astrology, Mercury rules communication for Cancers, so you should continue to be extra careful about communicating through retroshade. Put off big confrontations and important conversations until after the shadow period, or if you can't, be extra, extra careful. This could be a tricky time for you!

Leos, you should use this shadow period to your advantage. You might find yourself facing some possible decisions about your personal relationships (both romantic and platonic), but don't make them just yet. Retroshade is a great time for reflection, so make it work for you by thinking long and hard about whatever is going on instead of reaching for quick solutions.

Sorry, Virgos — it looks like you're in the same boat as the Geminis. Virgos are also ruled by Mercury, and so the effects of retroshade will feel particularly intense for you. Try to get through this two-week period by learning how to let go of the past and forgiving yourself for any bad decisions you might have made. This is the time to focus on not being so hard on yourself and moving forward.

Retroshade might put an emphasis on thinking about the past, but for you, that might not be a fantastic thing. You might find that issues from your past, with family, friends, strangers, or significant others, are popping up and annoying you. You might experience a lot of confusion and miscommunication. Try to keep a low profile until the shadow period is over.

It looks like this shadow period is going to be especially difficult for anyone born a Scorpio. Astrologist Lisa Stardust tells Bustle that because Jupiter will be traveling through Scorpio during retroshade, it will make things tricky. Jupiter typically touches on tough issues, like ethics and morality, so Scorpios will be doing some deep, heavy thinking that might be super emotional. During retroshade, Scorpios might have to work through some difficult decisions and challenges, and they may be presented with some hard truths.

Retroshade may be a little tricky for anyone who is a Sagittarius. You might find that the people closest to you think you're coming off as distant, rude, and hard to reach. Use this time of reflection to think about how you come off to others and how you might want to change your behavior in the future. Don't make any big decisions or changes, but instead use these two weeks to do a lot of thinking about what you might want to adjust during 2018.

As a Capricorn, you may have found that Mercury retrograde left you feeling unsure about your intuition. This feeling will most likely linger through retroshade, leaving you feeling confused and a little unsure about any decision you might have to make. Put off those decisions and be careful about what you say to others. According to Cafe Astrology, you should put off travel plans as well.

There are two things you need to continue focusing on as retrograde ends and retroshade begins: your finances and the way you talk to your friends. The feeling of confusion when it comes to communicating with friends will linger through retroshade, so take extra caution and be really clear. Also, use this time to think about what you want from your friends. You should also continue to be careful about how you spend your money, avoiding any big financial decisions.

Pisces, you may have found that Mercury retrograde was negatively affecting your work life. Maybe you had trouble communicating with co-workers or moving forward on a project. Well, retroshade will continue to be tough for you. Be extra careful when communicating with those you work with. Use retroshade as a time to think about your past projects and learn how to move forward from what you discovered.