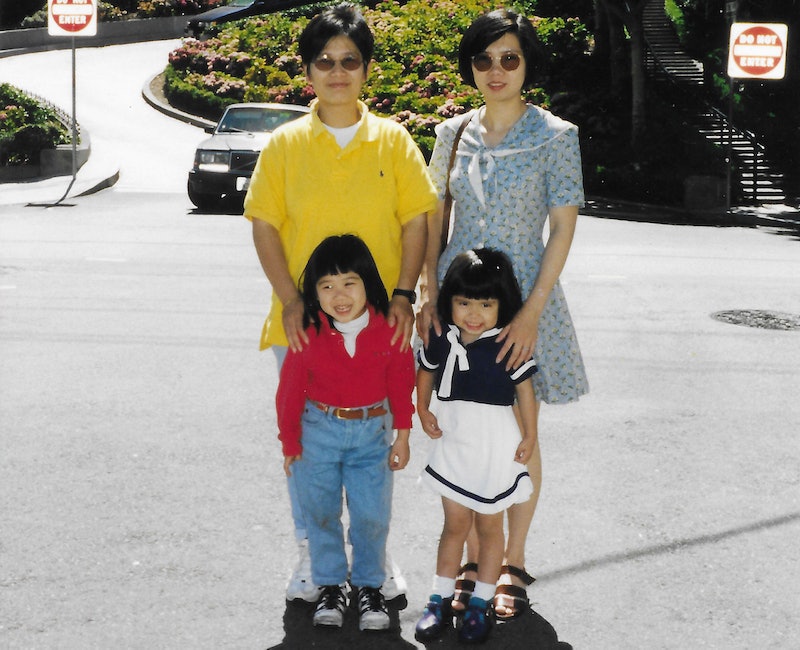 I can count on one hand the amount of times I’ve seen my mother in a dress.

Growing up, I mostly associated the phrase “tomboy” with my short-haired, sports-loving mother. For all my childhood, she wore what amounted to three outfits: pullover hoodies and straight-legged jeans, short-sleeved Ralph Lauren polo shirts and straight-legged jeans, and tee shirts and shorts if the weather ever reached above 85 degrees in foggy San Francisco. These outfits were paired with sensible sneakers or Timberland boots. Absorbing the way my mom presented herself to the world, especially juxtaposed next to the other moms who picked their kids up wearing rouge on their lips, sequined blouses or pearl earrings, a profoundly freeing precedent was set for me, one that I didn't appreciate or realize until I was living across the country.

My mom’s general pragmatic, low-maintenance, comfort first style bled into how she shopped for my siblings and I. The four of us would sometimes step out in corresponding pullover hoodies from Gap, purchased at a suburban outlet mall with multiple coupons — my mom was also the queen of the bargain hunters. Sometimes, my sister and I wore clothes sold in the boys’ section, simply because they were on sale. There were instances where I’d show up to school in the same hoodie and swishy athletic pants as boys in my class. They’d get shamed for wearing clothes that a girl wore while other girls ridiculed me for wearing outfits that didn’t “match.”

From adolescence onward, I shied away from dresses and skirts. My wardrobe was subconsciously influenced by my mother, and consisted of zip-up hoodies, band T-shirts, polo tees and colorful high-top Converse All Stars. It wasn't until my 20s when I started to experiment with high-femininity. As a teenager, I (somewhat embarrassingly) thrived in the emo and punk subcultures. Trips to Hot Topic and Spencer’s were frequent, my wardrobe consisted of blacks, dark blues and deep purples. There was something to those gender-bending aesthetics that felt like home to me.

For every beat-up pair of Converse, my mom would mention how she wore the same exact pairs as I did growing up. When I'd ask her more about it, she'd go mum — she's a woman of few words. What I do know about her androgynous style evolution: My mom grew up in Hong Kong, which meant that during her childhood, all schools required students to dress in uniforms, including collared shirts and skirts — female students were allowed to opt for pants as soon as they reached middle school. Because of these clothing rules, mom only had to face the comments about her tomboy aesthetic on the weekends. My grandmother, the type of prim and proper woman who still loves to wear Burberry bucket hats, often frowned at my mom’s resistance to dresses and feminine shoes. My aunt, who is my mom’s older sister by 13 months, is as traditionally feminine as they come.

No matter what anyone thought or said, my mother says nothing fazed her: She dressed how she wanted to, regardless. Even now, if my mom’s ever misgendered — and this happens occasionally — she doesn’t bat an eye, takes it with a smile, and carries on.

As a queer woman myself, I've often felt the need to offer a disclaimer: My mom is married to my father and has never expressed queer tendencies. That’s not to say one’s orientation strictly influences one’s fashion choices, though I admit mine does in the way that I yearn to present my queerness. My mom's rejection of traditional femininity had little to do with sexuality or gender. Rather, it was rooted in how much she valued her freedom of expression and how comfortable she was in her own skin. This concept of self expression transcending society's boxes of gender, sexuality and race was so vital to my path of self discovery. It allowed me to lean into my queerness with ease because my mom created a household where complex identities could thrive.

When I was 16, my aunt asked me if I thought if she or my mom was more womanly. I told her I thought she was, because of the way that she presented herself. She laughed and said I was wrong because my mom gave birth to three children while she only had the one. Whether or not my aunt truly measured her value as a woman this way, this was the moment I realized womanhood could mean a myriad of things to different people.

My mom never taught me to dress a certain way to impress a certain gender; she taught me to feel comfortable in my clothes and the right person will feel just as comfortable with that. I was allowed to shamelessly wear slouchy T-shirts under plaid button-downs and unisex boots without fear of judgement from others. And now in my adulthood, I feel confident with the agency to bounce along the sliding scale of gender, presenting as feminine or masculine or a combination of both as I please.