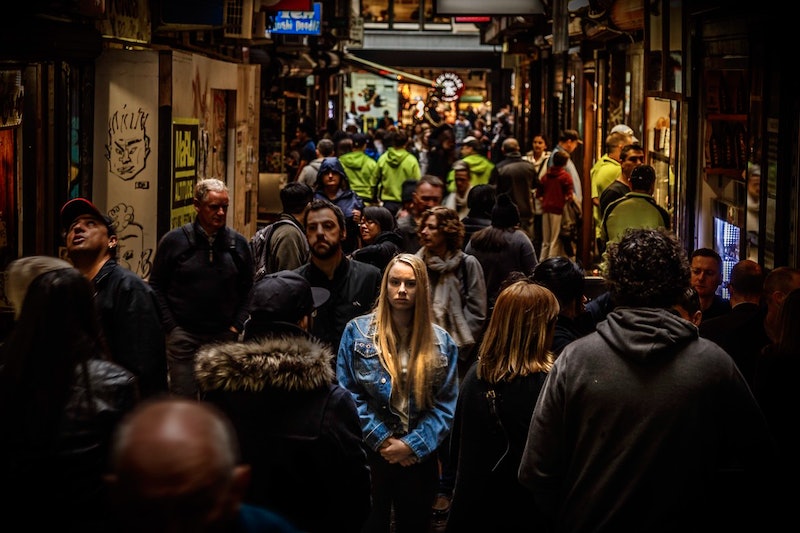 Greeting card holidays like Father's Day can be difficult for those who either don't have a father or who are estranged from their fathers. I have been both of these people at various times in my life, so I know firsthand that there a few things not to say to people who don't celebrate Father's Day. As I've gotten older, I don't get triggered as much any more, but I know from experience that these holidays can be a mine field for someone who is experiencing a difficult relationship with a parent, or who has lost a parent.

My parents got divorced when I was 3, and after that my dad's presence in my life was sporadic at best. During that time, there was no one to take me to father-daughter dances — to be honest I don't even remember this being a thing when I was growing up, but it's possible that I blocked it from my memory. Father's Day celebrations were often tied to my little brother's birthday party, which helped take the focus off the big absence in our lives on that particular day.

My dad and I reconciled when I was 21, and we eventually developed a pretty great relationship where I felt seen, heard, loved, and supported. But then, when he was only 59, my dad died, which opened up a fresh Father's Day wound. If you want to be an ally this Father's Day, here's what not to say to those who don't celebrate, and what you can say instead.

1. Do You Miss Your Dad Today?

Even if us fatherless kids don't necessarily miss our dads, we miss having a dad worthy of a celebration. Asking a friend if they miss their dad is like asking if they would miss having a hand or a foot. Instead, consider saying, "I know it's a tough day for you, and I'm here if you need to talk." Please only say this if you really mean it, because talking about this stuff is hard.

There are some gut-wrenching scenes I truly love from the TV show Parenthood, including one where Sarah Braverman, played by the always-amazing Lauren Graham, navigates being both a mother and a father to her children, Amber and Drew. In one scene in particular Drew runs away to try to go with live with his dad.

When his father rejects him Sarah goes to pick him up, which culminates in a scene of the two of them hugging fiercely in the rain while she basically tells Drew that she's sorry he has such a crappy dad, and he's just going to have to settle for her even though she knows that's not what he wants. I cried like a baby during that scene. Sometimes, just acknowledging that something is difficult and unfair is enough.

2. What Are You Doing To Celebrate Father's Day?

If you have a friend who isn't in touch with their father, or who has lost their father, please don't ask them how they plan to celebrate Father's Day. Instead, you can text your friend and say something like, "Thinking of you today." It's also nice to ask them if they want to get together for drinks, a hike, or brunch. If your friend would rather be alone, that's OK too.

One thing a friend did for me right around my dad's birthday was visit his grave. I live in California, and my dad is buried in Arizona; I have not been there in five years. My friend was traveling there for work, and she asked if I would like her to go put flowers on his grave. This simple gesture meant so much to me. If you are in a position to help someone in this way, it's always appreciated no matter what day it is, but only if you know the person had a good relationship with their father.

If you have an amazing father who made a little faux pas, Father's Day is not the time to bring it up to your fatherless bestie. While your friend might normally be willing to commiserate with you about your dad eating all of the cookies, or embarrassing you in front of your partner, they might not be as sympathetic on this particular day.

Keep in mind that your friend would likely love the opportunity to have dad who stuck around long enough to meet any of their significant others, or who is alive to eat cookies. Instead of complaining, take a few minutes to make a gratitude list.

4. Does Father's Day Still Bother You?

Even if we don't talk about it all of the time, us fatherless kids are still bothered by a day that celebrates what we don't have. Please don't ask your fatherless friends if Father's Day bothers them. The answer is yes. Anything that highlights a loss can cause pain, so please keep this in mind before asking an insensitive question.

If your fatherless friend brings up Father's Day, take the time to really listen to them. Having someone to talk to can make all of the difference.

5. Do You Think You Have Trouble In Relationships Because Of Your Dad?

Um, yes, I do. I don't know any fatherless daughters who don't have trouble in romantic relationships. While it might be true, please don't ask me about it — especially not on Father's Day.

Trusting someone, especially a man, in a relationship is hard for me because in my experience men leave, and in my father's case, get married six times and give someone else's kids the life I think I deserved. How could this not cause problems for the way I approach relationships? This is likely something I will be working through for my entire life, and if I want to talk to you about I will bring it up.

6. Your Dad Is Such A Blah, Blah, You Deserve Better

Unless you're my therapist, or my bestie with an equally bad dad, please don't say this to me or any of your friends with delinquent dads. Obviously they know they deserved better, but by putting down their dads, on Father's Day, you might make them unintentionally defensive. This could put your friend in a position to feel like they need to defend a person they really don't even want to talk about. Instead of bashing a friend's dad, create a safe space for them.

7. What Was It Like To Grow Up Without A Dad?

Growing up without a dad sucked. Period. If your fatherless friend wants you to know the details they will tell you. Kids who grow up without fathers miss out on a million little things that other people take for granted every day, whether their father left the family or passed away.

For my brother, the example he uses is "boy stuff." Things like how to put on a jock strap for football practice, when to start shaving, or how to know when a girl likes you. We both missed out on having a male role model in our lives, and I don't think either of us has ever felt truly safe or secure in a relationship. My mom did the best she could, and she gave up her whole life to raise us alone, but it was still difficult.

8. Why Doesn't Your Child Have A Dad?

Some families may not have a dad by design, and that's OK too. These situations were created purposefully versus a child suffering the loss of a father. And, what people don't want is judgment passed on the families they lovingly, and intentionally created, so please don't ask someone why their child doesn't have a dad.

Some same sex couples celebrate both Mother's and Father's days, and some use Father's Day to honor a father figure in the child's life. Some single moms never intended a father for their children, but that doesn't mean they don't provide male roles models for their kids to look up to who play active roles in the children's lives.

While Father's Day is definitely a time to celebrate fathers, it's important to keep in mind that the day is not a celebration for everyone. I'm so happy for those who have a wonderful and present father or father figure — it makes me feel like there is good in the world. And, it's still a hard day.