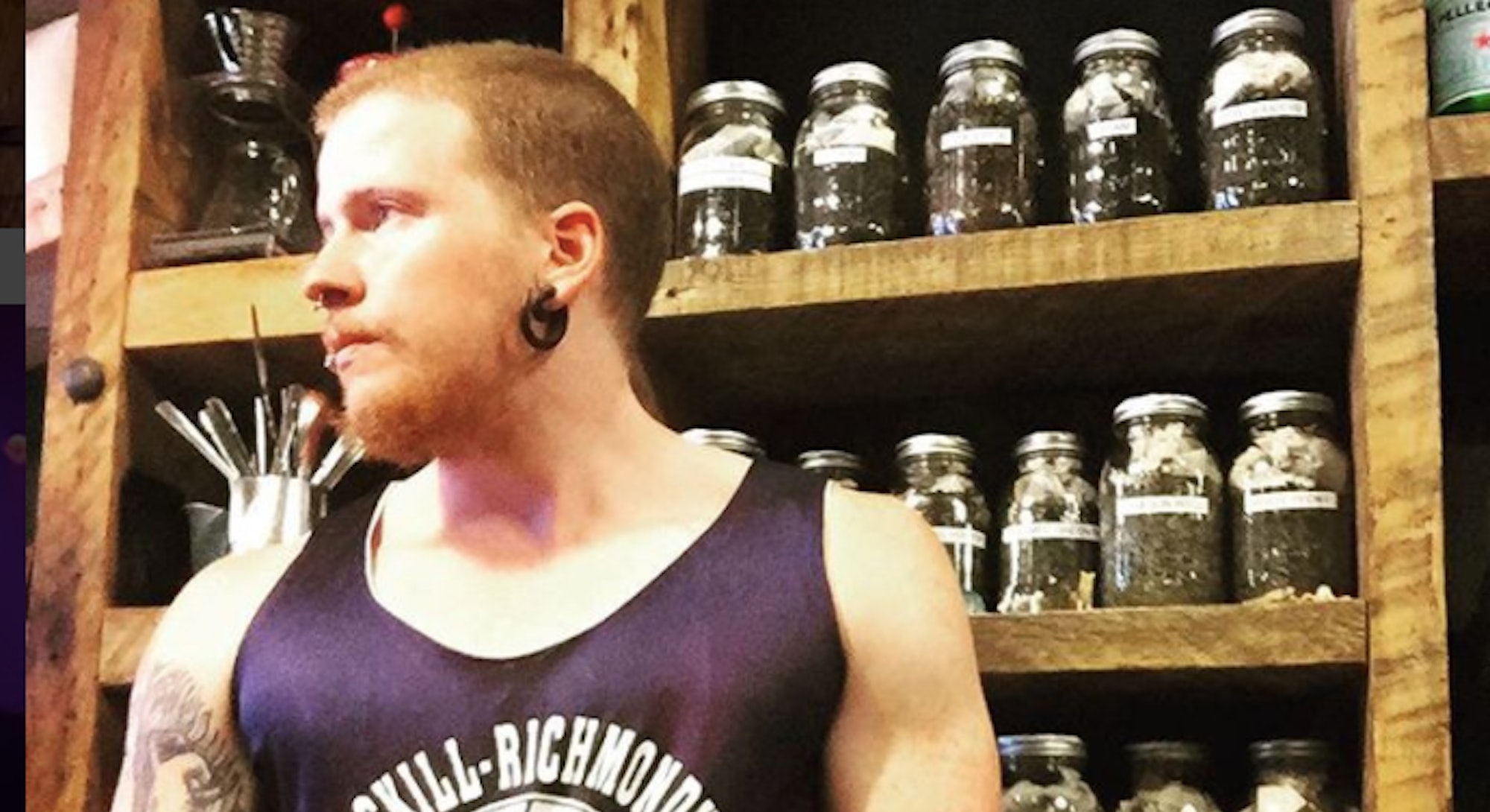 I didn't really think about my gender much as a kid. The word "tomboy" hung around me, categorizing my love of sports and my wardrobe of baggy tees and Umbro shorts into something that other people could tolerate. Mostly, I felt like a boyish, genderless blob who really disliked dresses and playing house.

There were certain reasons, I suppose, why I was allowed the freedom to dress and act as I chose without any real complication. We grant a certain permission to little girls, to delay the onset of femininity. And, growing big in a small, rural town, I was surrounded by women whose features and manner of dress would be considered by some to be on the masculine side of the spectrum: short haircuts, boots, baggy jeans. For a time, everyone around me seemed to let my appearance slide.

But good things never last. A shift in attitude began in sixth grade or so, in the form of nagging comments from parents or peers: Isn’t time to be a girl now Isn’t it time to grow out of this?

After a while, I realized that my value, or at least my social capital, relied on how traditionally pretty I looked. How I’d lived for the first 12 years of my life had apparently been a kind of free pass.

I folded under the pressure. In high school I began to make strict rules for my weekly wardrobe regimen. A skirt at least once a week. Hair down, not up. Mascara on daily. Baggy sweatshirts and T-shirts, no more than once a week. When it came to school and sports and extracurricular activities, I was obsessive about getting noticed and being the best. But, as far as my clothes, I wanted to blend in, to be ignored.

There was one small exception: a pair of silver sequined ballet flats I found at Delia's. They were a gaudy and garish accessory that peeked out from the flared bottom of my blue jeans. I loved those shoes and the way they didn't feel so discordant with my sense of self. I never had to force myself to wear them. I wanted them to be seen. Remembering them reminds me that while the enforced femininity of my adolescence often left me feeling sick, sad, and despondent, I found genuine aesthetic pleasures all the same.

High school was spent carefully crafting a livable womanhood for myself. There were days when getting dressed caused me to shake and feel nauseous and, at the time, I couldn’t pinpoint why. While plotting and planning my femininity so intentionally, I was repressing the boyish blob inside of me, relegating them to the world of impossibility. As a result, I was constantly plagued with the nagging feeling something was wrong, but without an explanation.

But, there was a left turn at some American Eagle that marked a seismic shift for me. It was my second year of study at my fancy women’s college, and it was a very deliberate choice: Today, I will buy a men’s sweater.

Things began to change. A burgeoning feminist consciousness told me that gender is mostly constructed and that transcending the one I was assigned was not only possible, but might just also be the key to feeling liberated. I started to bind, I changed my name. I settled comfortably into genderqueer, a label that fit snugly, just like that first sweater.

You’d think that the story might end here, but gender is fluid and evolving and even as we transcend we bang against the bounds of a binary imposed.

Although I felt freed by my aesthetic alterations, my more masculine dress had come with new expectations about my physical behaviors and appearance. Comments were made about how a certain pair of shoes seemed too feminine or how I spoke from the top of my voice and swished around my limp wrists. I liked who I had become, but just as outsiders' voices had once told me it was time for girlhood, a new chorus of peers and of other transmasculine people seemed to be saying “You have to grow up now. It’s time to be a man.”

Had I left the painful enforcement of one gender only to find myself in another trap?

I pushed forward, making the choice to pursue physical transition, hormones, and top surgery — even though I didn't know how my gender might look in a year, in five, in 10. But, as my body began to align with my sense of self, I felt myself growing bolder. Who knows you better than you? I realized that my self at my core, in spite of these corporeal alterations I needed to make, is a feminine creature.

I suppose for some this might be hard to understand; if you've spent a lifetime in a body and a gender that align by societal standards, the labyrinthine twists and turns that have marked my gender journey might seem excessive, unnecessary. I can't fully explain it myself. But, I knew that I needed to transition physically in order to continue moving through the world. That fact doesn't feel at odds with my femme gender expression and the way I present myself to the world.

Sex and gender and expression are like the separate gears in a clock and mine just happen to move together a little differently.

I began to set the essence free, to swish my hips, to screech at the highest range of my voice in moments of excitement, to gossip with the girls. I set up dalliances with my inner femme. I brought her out subtly with pink nails and long shirts that toed the line between blouse and dress. But, I was still afraid.

I wondered, am I too much of who I am?

Which brings me to a moment of relief, another shopping trip that marked a new and beautiful shift.

I headed to the men's≠–– section at H&M with a perfunctory sense of purpose. I was probably looking for tight black jeans and T-shirts in black, gradient grays, or earth tones. I’d settled comfortably into this jeans and tees androgyny and let my gender expression do most of the talking for my femme core.

But, as I left the store through the section that reads "women," I caught a glint of something familiar and lit up. Silver, shimmering, like a pair of shoes from another life. It was a T-shirt, cropped at the midriff. I flicked frantically through the varying sizes, landed on my size, and imagined myself hissing at strangers’ questioning looks as I gleefully brought my find to the fitting room.

It fit perfectly over my broad shoulders and toned chest muscles, revealing a sparse little trail of belly hairs that still fill me with joy to this day. I danced and twisted in the mirror, letting the tiny flecks of silver catch the light. I don’t think I’d ever seen my femme so actualized, materially and externally.

I proclaimed it to my reflection that this would be “My Summer of Crop-Tops.”

It’s never been the case, at least since coming into this permutation of my identity, that I’ve tried to hide being femme. And, in fact doing so would be near impossible: My femininity is etched into every syllable, every gesture, every movement of my being — But to purposefully flaunt it was something I hadn't considered.

What does it mean to flaunt? To boldly assert that one’s femininity is valid and vehement and visible? To flaunt femininity is a thing our society views with a certain disdain. Flaunting femininity is associated alternately with problematic promiscuity or innocent naivete. It’s seen as too immature or too dangerous for professional settings. It’s not allowed to be what it is without question, comment, critique. And so, I believe that to flaunt is an act of defiance.

To do so in a body that society reads as a cisgender man — bearded, flat-chested, with a boxy frame — introduces a whole new series of complications. The easy flexibility of my tomboyish youth reveals a troubling truth: That there is a stark difference in how our society tolerates gender transgression from people it perceives to be women versus people it perceives to be men. In my experience, to flaunt femininity from this position, is to invite ridicule, even violence.

Yet I persist. I pair the silver shimmering crop-top with black cutoff shorts, and a nicely matched pearlescent nail polish; I add sunglasses and Doc Marten’s for a layer of protection. I emerge onto the hot summer streets of Brooklyn fully feeling myself, imagining that the stares, the furtive whispers, and the outright open taunting are a breeze that cools me and then flows right on past.

My femme is something to be loved and shared with the world, no matter how harsh the response may be. My femme gives thanks to the teenage girl who struggled, but illuminated ways to introduce complexity and compassion into this future human’s gendered consciousness. My femme is love and strength and beauty and power.

My femme is to be flaunted.